An event every year that begins at 12:00 am on day 11 of November, repeating indefinitely 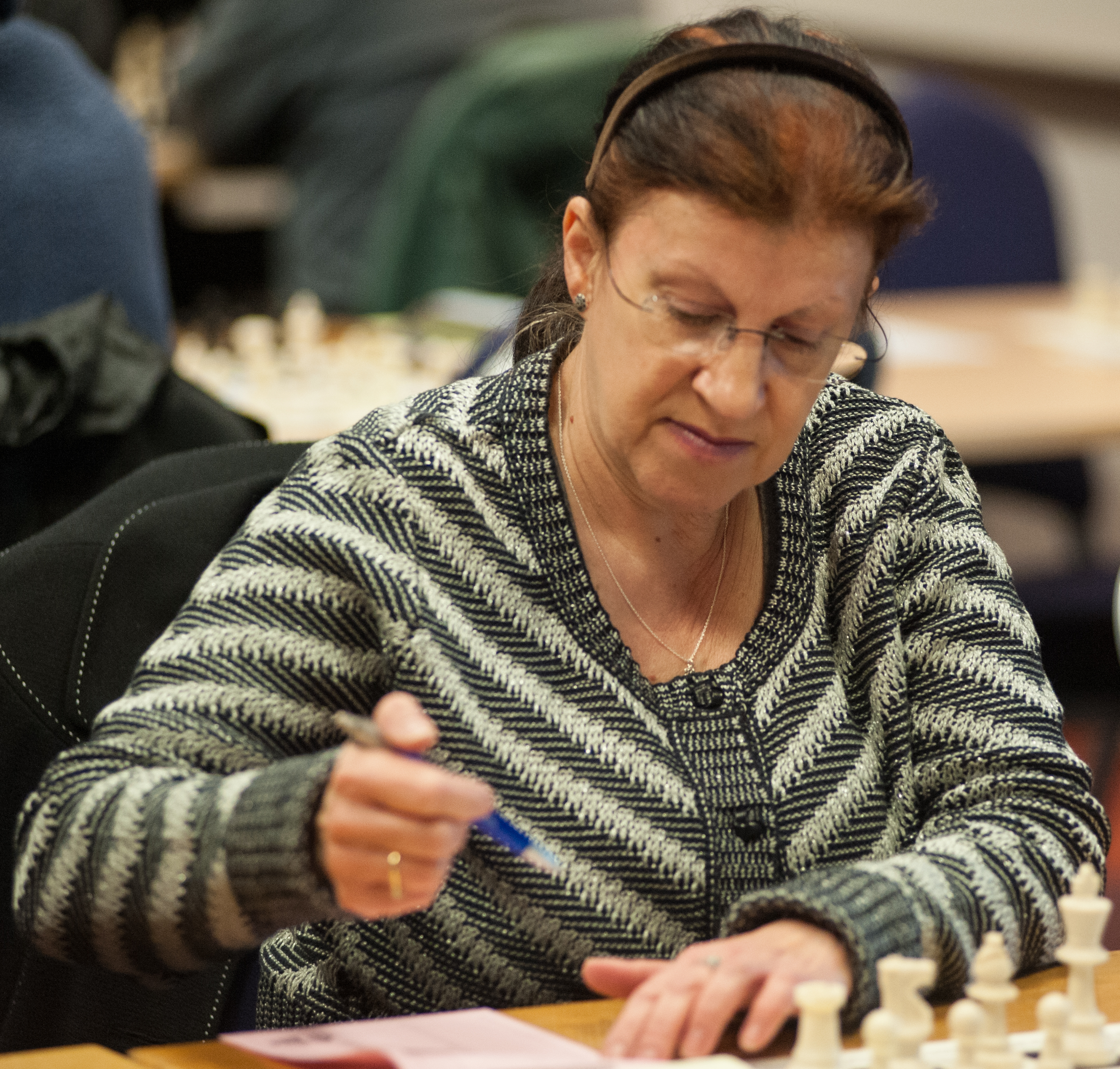 Best wishes to WGM Sheila Jackson on her birthday.

Sheila Jackson was born on Monday, November 11th in 1957 in Liverpool, Merseyside.

(The following article is a composite from various sources including Sheila via email {many thanks!}, Richard O’Brien in British Chess, Wikipedia and others)

Sheila attended Broad Square CP School, Liverpool and started playing chess in year five when ten years old. In her final year she played on board one for the school team helping to win the first (organised by the BCF) National Primary Schools’ Team Knockout Championship. The final was played in St. Ermin’s Hotel, London in 1969.

Following this Sheila was Board 1 for Liverpool Under 11 winners of National Team Championship held in Liverpool 1969. Part of their success was due to teacher Mike Price, later to become a member of the local club Atticus, who coached Sheila.

At Coventry in 1970 Sheila won the British Girls Under-14 Championship (she was the first ever winner) aged 12 and she was the Under-18 Girls championship at Blackpool 1971 aged just 13.

Spurred on by keen but friendly rivalry from Susan Caldwell, eleven months her junior who had also won both the British U14 and U8 titles by the age of thirteen, Sheila went from strength to strength. At the age of 13 she represented England Girls (U18) in the Faber Cup and other events.

During this year she has reached British Ladies Championship standard. John Littlewood was now her coach. John at the time was also coaching his son Paul, who was later to become British Champion.

Just a few days past here sixteenth birthday she took part in a six-player Women’s International event sponsored by Guardian Royal Exchange in London. She shared first place ahead of two IMs, both of whom had taken part in the Interzonals.

Since 1974 she has been a regular member of the full England team and has played in the last five Olympiads.

Aged 16 Sheila made her debut in the 6th Women’s Olympiad in Medellin, Colombia.

In 1975 at Morecambe she won the first of four British Ladies Championship titles. The others were in Ayr 1978, Brighton 1980 and back to Morecambe in 1981.
The following year (1975, aged 17) she made her debut in the Women’s Zonal held in Karlovy Vary, Czechoslovakia.

In 1976 Sheila was part of the England Team that won silver at the Haifa Olympiad. The England team was Jana Hartston, Sheila, Elaine Pritchard and Susan Caldwell. Sheila scored 6/9.

In total Sheila played in ten consecutive Olympiads and in 1982 she won the individual silver for her board two performance in Lucerne. She scored 8.5/12, a score that won only bettered by Nana Alexandria of the Soviet Union who was shortly to be rated joint number one in the world. This result naturally improved here Elo rating and by January 1983 she was rated in the top 30.

In 1977 she was member of the Atticus squad that surprisingly won the BCF National Club Championship against all the odds. Although not playing in the final she attended as first reserve displaying her tee shirt ‘Atticus for the Cup’. After that poor John Nunn and rest of the Oxford University team had no chance.

Five times, from 1977 to 1981 inclusive she won the Grande Prixette, the women’s equivalent of the Leigh Grand Prix.

Her employers, Lambeth Council in London where she works as an accounts clerk and to a lesser extent her previous employers in Liverpool, have allowed here extra leave to play in the more important events. Her most successful results abroad have been second places at both Pernik 1979 and Wijk aan Zee the following year. In 1980 she finished fourth at Bydgoszcz ahead of two WGMs.

Sheila, being a great believer that women players are more likely to improve if they played in mixed tournaments, has certainly proved her point. In 1978/9 she scored 6/10 in the Challengers at Hastings – a 210 (BCF) performance. This included the better of a draw against IM Bert Enklaar of The Netherlands.

1979 saw her debut in the British Championship and she was top woman this year and subsequent three more years (1982, 1983 and 1984) whilst there was still a separate Ladies’ Championship running concurrently. On the first occasion she scored a respectable 4.5/11 and on the second an excellent 5.5. This latter performance equivalent to a WGM norm was one of the best every by a woman player in this country. Of her eleven opponents one is now a GM, four are IMs and four are FMs. This included a marathon against Ray Keene which went on for four days. she has twice proved wrong those who thought that women players will always bring up the rear in this event.

In the 1984 event at Brighton she scored a 2400+ rating performance and a WGM result.

1981 saw Sheila being awarded the Women’s International Master title and in 2001 she became a Woman’s Grandmaster.

Sheila made her in 1991 debut at the Women’s Interzonal Subotica, Yugoslavia.

For some considerable time she has been a leading light in women’s chess not just on the board but off it as well. One of only tow female BCF coaches in the countty she has helped out in various coaching seminars in London and the Midlands.

In August 1982 she became President of the British Women’s Chess Association at a rather stormy meeting in Torquay. For a time she has also acted as treasurer of the association.

In 1993 she Played in one European Team Championship in Hungary as reserve player (there were only two boards).

1994 contained a disappointment and some measure of retribution : Sheila secured annual leave to play in the Moscow Olympiad but wasn’t selected despite her
high rating and grandmaster norms. Following that she scored an excellent 5/7 in the 1994 Guernsey Open (just before the Olympiad) finishing a full point ahead of the Women’s number 1.

In 4NCL Sheila became Female Player of the Year when playing for Wood Green.

In 2018 She made here Senior 50+ Open World Team Championships debut, winning both individual Bronze plus Team Bronze playing on board 1 for England Women.
Following that Rhodes 2018 in the European 50+ Open Team Championship she played in a mixed England 2 team and Croatia 2019 on Board 1 for a mixed England 2 Team.
She played board 1 for England Women in the Prague World Team Open in March 2020 which was cut short by the 2020 pandemic.

A believer (Ed : comments were current in 1983) in reform she has been campaigning (together with other younger members of the BWCA – Susan Caldwell, Maria Eagle and Angela Eagle in particular) for both women and girls to compete with the opposite sex at the British Championships. Slowly but surely support has grown from both inside and outside the BWCA. In junior events, which are now mixed, the girls titles are awarded to the highest placed girl competing. However the relevant organisations object to the title of Ladies Champion being awarded to the highest placed woman player in the championship itself. This means that Sheila and other women players are are strong enough to play in the main championship and thus gain opportunities to achieve WIM and WGM norms and improve their basic standard of play will be denied the realistic right to play for the British Ladies title. Hopefully notice will eventually be taken of the BWCA’s wishes and Sheila will one day compete for the title again.

According to Felice Sheila’s peak FIDE rating was 2295 in January 1987.

With the white pieces Sheila is a die hard 1.e4 player being a big fan (along with Susan Lalic) of the Sicilian Alapin and she allows the Marshall Attack.

As the second player she plays the open games and the Nimzo-Indian Defence.

“Sheila Jackson played for England in the Women’s Chess Olympiads:

In 1991, in Subotica Sheila Jackson participated in the Women’s World Chess Championship Interzonal Tournament where she stayed at 31st place.

Since 2000, participate in chess tournaments rarely.”