An event every year that begins at 12:00 am on day 20 of September, repeating indefinitely 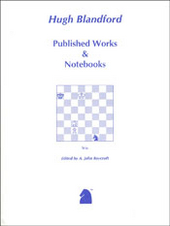 BCN remembers Hugh Blandford who was a British composer.

On this day Ernest Borgnine was born and an earthquake measuring 6.3 in magnitude struck Anhui Province, China, causing 101 deaths.

The family moved to Jamaica and he spent his early childhood there until he was nine years old when they sailed from Kingston, Jamaica with his family to Bristol on board the SS Carare (Elders & Fyffes Line) :

His mother Alice Rhoda Crumpton passed away on 19 July 1964 in Minehead, Somerset, at the age of 79.

His father Rev Albert Francis passed away in December 1967 in Somerset at the age of 79.

He had three children during his marriage.

He died in Hatfield, Hertfordshire on Sunday, September 20th, 1981.

“The modest and self-effacing composer who formerly conducted our Studies column from 1951-1972 died in September. His work as a metallurgist and his family responsibilities allowed him to make periodical contributions over a long span and to offer us many of his own original compositions.

His style, as with his manner, was essentially quiet and it was a rarity for him to compose anything other than wins.

His last voluntary labour was to compile an index for E.G. of all studies published there to date. His loss to the world of of studies will be greatly felt.

See more of his compositions here from the arves.org database.

“British study composer and FIDE Judge of Endgame Studies. Born on 24th January 1917. Since July 1951, Hugh Blandford has conducted the Endings Section of the British Chess Magazine. By profession a metallurgist, he was married and had two children. Of his 60 or more studies he was best known for the excelsior theme.”

Hugh Francis Blandford (24 January 1917 – 20 September 1981) was a chess endgame composer born in Southampton, England.[1]
He spent several years of his childhood in Jamaica with his father, the Reverend Albert Francis (Frank) Blandford, a Minister in the Congregational church, his mother and two younger brothers, Evan Arthur and Philip Thomas Blandford. All three brothers then returned to England and attended Eltham College (the School for the Sons of Missionaries) in South-east London, while their parents remained in Jamaica. He married Marjorie Cox, whom he had worked with during the Second World War.

He played chess from his schooldays and as well as playing, also started to compose original chess endings. He became known in the field of chess endgame studies for a small but elegant body of compositions, expertly edited and published after Hugh’s death by his long-standing chess endings colleague, John Roycroft.[2]

Hugh Blandford was co-inventor with Richard Guy – and, later, with John Roycroft – of the Guy–Blandford–Roycroft code for classifying studies.[3] In July 1951 he began as the endgame study editor for the British Chess Magazine.[4][5] He was made an International Judge for Chess Composition[4] in 1961.[6]

A metallurgist, he continued to compose chess endgame studies until the end of his life, dying of a heart attack in early retirement in Hatfield, England, on 20 September 1981.