An event every year that begins at 12:00 am on day 8 of January, repeating indefinitely 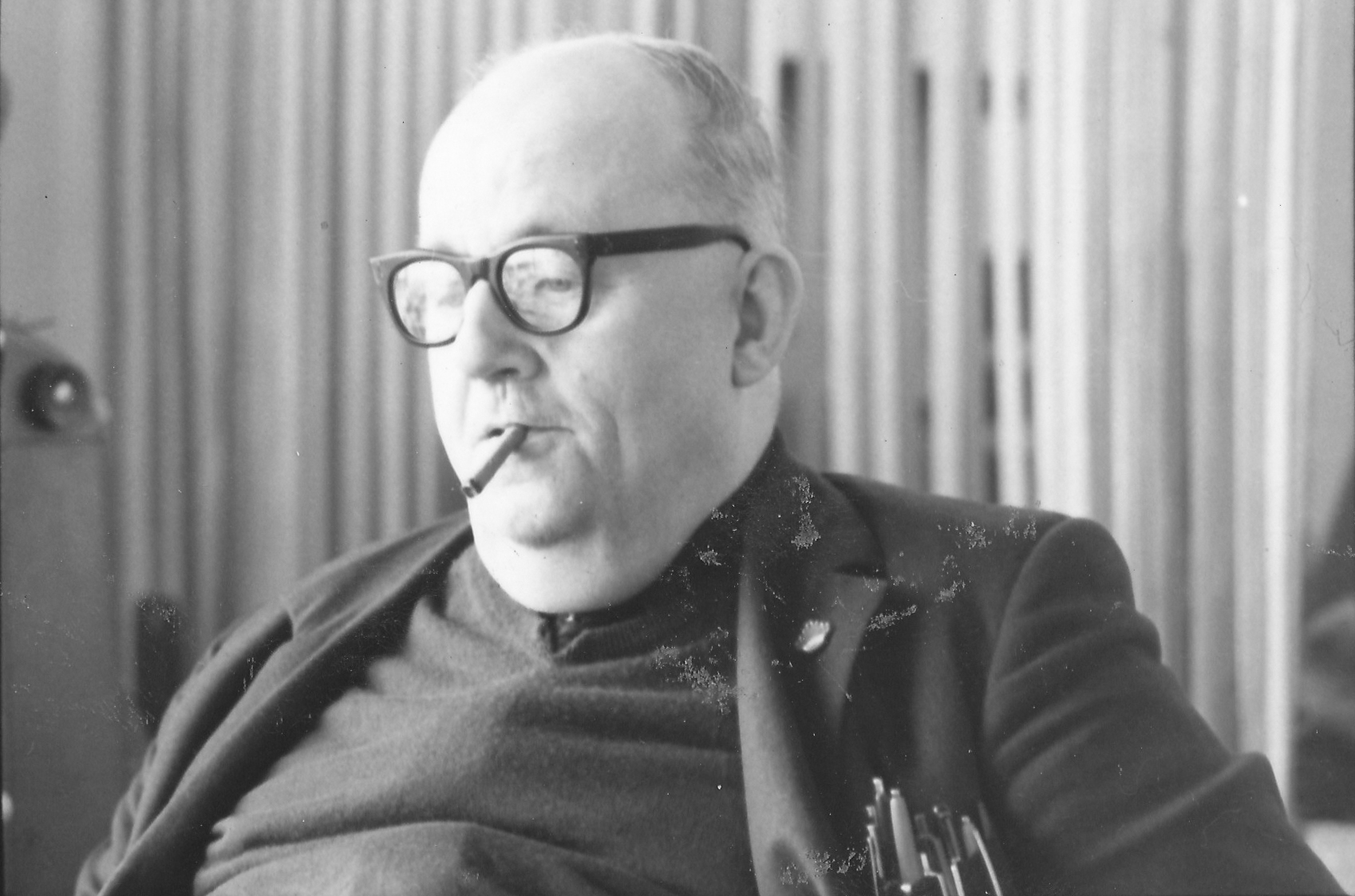 We remember William Ritson Morry who passed away on Saturday, January 8th, 1994.

(A point of detail : It is incorrect, but many do, to write WRM hyphenated. His first name was William, his middle name was Ritson and his surname was Morry. He chose to use his middle name and was known by his friends as Ritson. Maybe this was because he father was also William Morry?)

WRM was born in the Wirral on Monday, September 5th 1910 and his parents were William D Morry (born 16th July 1877). William was a sub-postmaster and seller of fancy goods. His mother was Norah Morry who undertook “unpaid domestic duties”.

In the 1939 register he is recorded as being a solicitor with his own practice and was living at 294 Walmley Road, Royal Sutton Coldfield, Warwickshire with his parents : he was 29 years old.

In 1943 WRM was mentioned in the London Gazette several times:

It would appear that this was the start of his first bankruptcy proceedings..

and in the same year on September 30th he was officially made bankrupt as recorded in the London Gazette, order number 195. This notice was repeated in the Edinburgh Gazette of the same year.

On the 8th of June 1944 he was recorded as being struck-off the list of solicitors under the Solicitors Acts of 1932 to 1941. It was determined that WRM had engaged in “fraudulent conversion of clients money”

For more on this see the excellent Chess in the Courts by Edward Winter.

In 1954 WRM sued BH Wood for libel over a letter BHW sent to Henry Golding of the Monmouthshire County Chess Association warning him of WRMs financial history. Here is a summary of the action :

In 1983 WRM was living at Flat 2, 53, Mayfield Road, Moseley, Birmingham, West Midlands and recorded as a Retired Chess Journalist. Elsewhere he was recorded as a freelance chess and cricket journalist.

and, unfortunately, in this year he made another appearance in the London Gazette (2nd September 1983) having been made bankrupt.

However, despite these unfortunate life events WRMs contribution to chess goes above and beyond them as he won the BCF President’s Award in 1984.

That great chess character, known to everybody simply as Ritson, has left us in the fullness of years, coincidentally during the first Hastings Congress he missed for decades.

William Ritson Morry (5 ix 1910-8 i 1994) was a player, organiser, writer, arbiter and occasional sponsor of tournaments whose life touched so many aspects of chess that it is hard to know where to begin.

Ritson was educated in North Wales at the same school as BH Wood. Both were at Birmingham University at the same time, after which Ritson trained as a solicitor. As early as 1930 he founded the Birmingham Junior League, and a little later wrote a chess column for a time for a local newspaper, though Ritson is hardly the first person you think of as someone who would hit deadlines consistently. He was equal second in a rather unrepresentative British Championship of 1936 and equal third in 1951. An unfortunate incident in the mid-1940s led to him being struck off, whereupon he became a chess professional, who eked out a precarious living for the last 48 years of his life. Yet, I never heard him complain, for he was able to immerse himself in chess full time, and what could be better than that?

He ran a series of newsletters, which hardly covered their expenses and produced and British Championship and Hastings bulletins for many years. 1951 was a significant year in his life, for he gained the FIDE Arbiter title (he was always an expert on the rules and many of the conventions we all play to were codified by him, or under his guidance). Later on Ritson, a great raconteur, was the life and soul of the show in Hastings which, along with the Warwickshire chess team and Erdington CC, was the great love of his life.

At times he seemed to run Hastings almost single-handed in the Frank Rhoden era. In fact GM Vasyukov went back to Moscow in 1966 and wrote that Ritson Morry was the only controller to be seen in the morning, afternoon and evening sessions of play. I recall that Ritson was amused when I told him of this, but did not demur. To show that there was life in the old dog, he organised a series of Birmingham international tournaments in the 1970s at which Tony Miles got much of his early experience.

One such tournament was financed by him alone, on the basis of the sale of a piece of land in Sutton Coldfield where a change of planning status had led to a windfall profit.

He also saved Hastings in late 1974,by giving a partial guarantee when another sponsor reduced his contribution. A few years later the Inland Revenue made him bankrupt when they could not get their piece of the action out of the deal. Doubtless Ritson thought that the money had gone to a worthier cause. I must not fail to mention his love of gambling or his erudition. Many is the time when you could have an exposition from him of the law of England, the practice of the courts and the police, or the political news of the day.

He was deeply immersed in local Labour Party politics in Birmingham and was a friend of football referee, ‘rainmaker’ Dennis Howell, one-time Minister for Sport. Ritson also played a great deal of postal chess, winning the British title in 1943. His book on the game written in conjunction with a Birmingham schoolmaster Mel Mitchell is a very instructive one, and he also wrote many reports and amusing articles for BCM, particularly one on of the failings of the Elo rating system regulations.

Here is a game Ritson won against the veteran German GM at the London Easter congress of 1940:

Bernard wrote about WRM a year later for the centenary edition of the programme for the Hastings International Congress :

“‘Ritson’ as we all knew him was an institution in British Chess, active as a player, writer,  organiser, drafter of rules and well-known for his skill as a raconteur, Educated in North Wales, he spent the rest of his life, from university days onwards, in Birmingham, but the Hastings Congress was very close to his heart.  He played in a number of pre-war events, and also a few post-war, but by the time of the Frank Rhoden revival of the mid-1950s he was firmly in the saddle organising the post-Christmas traditional event. In fact I recall how perturbed Frank Rhoden was when the news came that Ritson might emigrate to the West Indies.  It was not clear then how he could be replaced, for he supervised the morning, afternoon and evening sessions at the Sun Lounge (his favourite venue) and later at the Falaise Hall when the congress was still of such a size that we could all, including the Premier, be fitted into one room.

Ritson also did game commentaries for some years and produced a bulletin for at least three decades. He was greatly encouraging of younger talent and the objective historian has to recall the indignation he felt when players like Tony Miles and Nigel Short were not happy with the restraints imposed by financial stringency.

In his declining years Ritson was still a regular until his illness of late 1993, and a fixture at the “gate” where the public paid their entrance money at the Cinque Ports Hotel. The choice of word is deliberate as a visit to the dogs and the bookmaker was one of his rare pleasures outside chess.  Best of all, however, one recalls him telling his fund of stories and reminisces to anyone who cared to listen. His voice, alas, has been stilled, and we are left to recall his selfless devotion to chess and, in particular, to the Hastings Congress.

Here is an obituary from the Midland Counties Chess Union

Here is a biography from the Midland Counties  Chess Union newsletter from 1994.

Midlands organiser and player who was a chess professional and journalist. As a player his best performances were an =2nd in the British Championship 1936 and an = 3rd in 1951.

In the international field his best results have been an =3rd with List in the Major Open A section of the Nottingham congress of 1936 and =1st with Milner-Barry in the Premier Reserves A at the Hastings congress 1946/7. He has played for England in international matches against the Netherlands (thrice) and against Czechoslovakia and Yugoslavia.

A keen and accomplished correspondence player, he had the title of British Postal Master on account of his winning the British Correspondence Championship in 1943.

But it is as tournament and congress organiser that he is best known. He founded the Birmingham Junior League in 1930 and has organised thirty-four Birmingham congresses. He conceived the idea of a junior world championship and in 1951 he held the first World Junior Championship tournament at Birmingham (won by Borislav Ivkov). In the same year he was awarded the title of FIDE judge. He has also had much to do with the organisation of the Hastings Christmas chess congresses in the 1970s.

He has written much for British chess magazines and was the co-author along with the late W. R. Mitchell  of Tackle Chess, London, 1967.