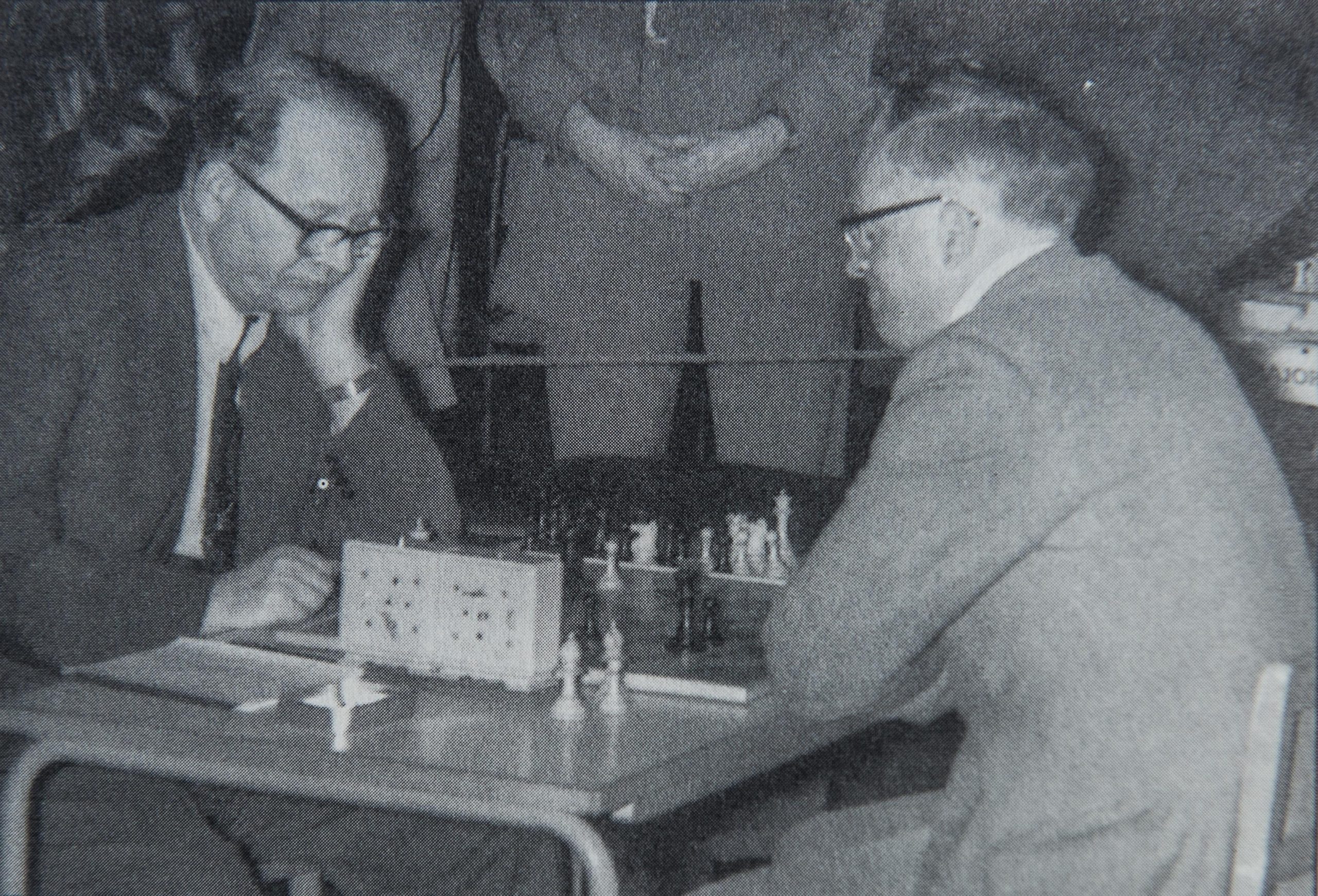 “Dr Stefan (ne Istvan) Fazekas was born in Satoraljaujhely, Hungary. Awarded the IM title in 1953 and the IMC title in 1964, he was British Champion in 1957 and is the oldest player ever to have won the title. He passed away in 1967 in Buckhurst Hill, Essex, England.”

The death of Dr. Fazekas on May 3rd has deprived British chess of one of its leading and most colourful figures. Ever since he came to this country nearly thirty years ago he took an active part, in the game at all levels, from club to international, rarely missing the chance – even when not in the best of health- to test his strength in competition and express his ideas afresh.

Stefan Fazekas was born on March 23rd, 1898, at Sitoraljaujhely on the Hungarian-Czechoslovak border, but it was not until a few years after the Great War, in which he served and was wounded, that he got the opportunity to play serious tournament chess. By present-day standards, however, events were few and far between, and the game always had to take second place to his medical work. The Doctor’s best international performances, for which he was later awarded the master title by F.I.D.E., came in the ‘thirties. In 1931, for instance, he was 2nd at Kosice, 3rd at Brno and 3rd at Prague. As it remained throughout his career, his play was excessively variable: fine conceptions were always liable to be ruined by blunders or impetuosity. The following game, played at Munchentratz in 1933, shows all going well; it earned inclusion in Le Lionnais’ anthology Les Prix de beauté aux échecs.

In 1939 Dr. Fazekas brought his family to England and established himself as a successful and much loved G.P. at Buckhurst Hill, Essex. He soon took a dominating part in county chess and went on to win the championship eleven times. In national events his inconsistency seemed too great a handicap, but at Plymouth in 1957, after so many tries, he astounded everyone by winning the British Championship in front of, among others, Alexander and Penrose. The next year fate struck him a cruel blow when he was left out of the B.C.F. team
for the Munich Olympiad. Yet after returning the trophy in protest he overcame his bitterness and took his place once more in the championship tournament-he could not resist
the thrill of the struggle.

Knowing that his best over-the-board days were behind him, the Doctor decided to go in for correspondence chess in 1959, and he at once found himself surprisingly at home in it. Here his old weaknesses could be set aside and his vast experience put to good use. Moreover, his great love for chess enabled him to devote hours of work to the analysis of a single
move if necessary. His rapid successes in this field won him a place in the Semi-Finals of the 5th World Correspondence Championship (where he finished 4th out of 14) and led to his
being chosen as Board 1 for the British team in the 5th Olympiad. On the results of these events he was awarded the title of international C.C. master. That he deserved it may be
judged from this fine strategic win against a grandmaster (C.C.) opponent in the individual tournament.

At the time of his death Dr. Fazekas had made a score of 5 out of 7 in the Olympiad Final and was still engaged with Zagorovsky of the U.S.S.R., a performance which showed his correspondence play to be close to grandmaster standard. And to end one’s days actually playing a World Champion is a distinction which I am sure would have appealed to this Doctor’s rich sense of humour.

While Dr. Fazekas’ social work as a humanist was for the peace of the world, in chess he was noted as a great fighter, in some ways reminiscent of Lasker. There was no retirement
for him. At Ilford in 1965 and 1966 he eagerly took on and held his own with a generation fifty years his junior, and this year he had once again qualified to play in the British Champion-
ship. The tournament at Oxford will not seem quite the same without him. I and his many friends will miss his wit and ebullience, his generosity, his love of life and chess.-P. H. C.

Here is his brief Wikipedia entry