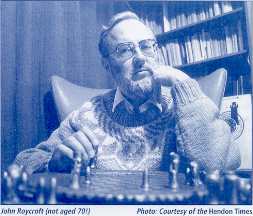 We are delighted to offer (Arthur) John Roycroft best wishes on his birthday, this day (July 25th) in 1929.

John was born in Hendon, London and his mother’s maiden name was Banks.

He married Betty in 1961 and they had a son and a daughter and now have several grand children.

He claimed that he had never suffered a common cold.

John is Platinum Life Member of the English Chess Federation and an “ECF Supporter”.

“From The Oxford Companion to Chess (Oxford University Press, 1984) by David Hooper and Ken Whyld :

In 1965 he founded EG, quarterly publication which became the world’s first and only long-running magazine devoted wholly to studies.

His Test Tube Chess (1972), the best English language guide to the art of studies., was revised and republished as The Chess Endgame Study (1981).

Studies are commonly classified by means of the GBR code of which he was co-inventor.”

“FIDE Judge of Endgame Studies. Born on 25th July 1929. Founder of the Chess Endgame Study Circle in London in March 1965.and its quarterly magazine EG, the first and only publication exclusively devoted to the composed chess ending. Roycroft who is a computer systems analyst and lives in London, has composed about 20 endgame studies.”

Here is AJR talking about himself on the BPCS web site

Here is his entry from the Chess Programming Wiki