An event every year that begins at 12:00 am on day 1 of February, repeating indefinitely 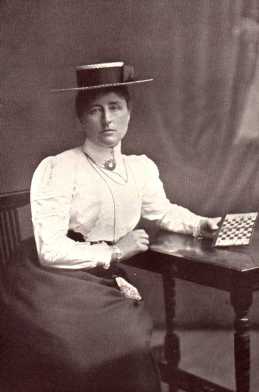 Many secondary and tertiary sources incorrectly give the Winter-Woods family home of Hareston Manor (now a venue for weddings) near Brixton, Plymouth, Devon as her birthplace.

The family was resident in Boulogne in at least 1858 (as discussed below) and a UK birth certificate for Edith does not appear to exist. Having said that, a French birth certificate has yet to be located. Both Brian Denman and Chris Ravilious are satisfied that Edith was born in Boulogne and various census records attest to this. Ed : both Richard James and myself (JEU) have examined the evidence carefully and Boulogne would appear to be correct.

Thomas Winter-Wood was born in Har(e)ston, Devon in 1819 and was, himself a strong player having been educated at Plympton Grammar School(now known as Hele’s School). Thomas was the son of John Wood-Winter who, in 1824, reversed the order of the family surname. Thomas sold the family estate leaving the Winter-Woods with substantial means with each family member able to pursue their leisure interests whilst retaining a number of domestic staff.

Thomas taught all of his family to play chess and Edith learnt at the age of 5. Both Edward J and Carslake W also learnt early on, Edward (aged 11 in 1858) played members of Boulogne Chess Club giving them rook odds and ten years later Edward joined London Chess Club.

“He played in several tournaments and in blindfold simuls he drew two games against Lowenthal and one against Blackburne. In 1878 he joined the Croydon Chess Club and once in one of their tournaments scored 23-7. He also enjoyed success in many other club tournaments, correspondence chess and problem solving tournaments. Many of his problems appeared in leading publications of the day.”

and, also according to Tartajubow :

“Her other brother, Carslake W. Wood (1849 – 1924), lived with his mother’s brother, Major Sole of the 5th Militia of West York, in Torquay. While travelling Europe with the Soles, he also developed a taste for painting and on many occasions donated his paintings as prizes in chess tournaments.”

Again, according to Tartajubow :
“As for Mrs. Baird, at the time, she was without rival in British ladies chess. Her first problem was composed at the age of 8 and was published in the Western Magazine and Portfolio. It was not deep or brilliant, but editors were attracted to her quaint notes that accompanied her submissions. One such note to the editor of Pictorial World read, ‘I like composing very much and do my problems all myself; in fact I would rather my mother never saw them, for she generally cooks them and that gives me a lot of trouble.’

“In 1893, for instance, she entered The Hackney Mercury 3-mover tournament, with a limit of 6 pieces. Most of the great composers of the time had entered, – B. G. Laws, P. H. Williams and James Raynor among them, but she won 1st prize. As one American critic observed, ‘The fact that the tourney assumed an almost international character rendered the triumph of the distinguished lady victor as noteworthy as it was creditable’.”

Here is this first prize:

The solution may be found at the foot of this article.

She very quickly progressed and was soon producing problems that were described as being “exceedingly pretty” and which ‘displayed unmistakable aptitude for the intricacies of chess.’ Her work 700 Chess Problems was published in 1902 and took her 14 years to complete.”

700 Chess Problems may be downloaded from here.

According to the 1871 census the Winter-Wood household lived at “Hareston”, Tavistock Road, Croydon, Surrey and consisted of Thomas (52 and Landowner), Eliza (44) plus Edith’s brothers Edward J (23 and Banker) and Carslake W (22 and retired banker), Marie A (17), Edith (11) plus three (!) domestic servants.

In 1880 (aged 21) Edith married the Deputy Inspector-General of Fleets and Hospitals, William James Baird, MD, of the Royal Navy. In 1881 their only child Lilian was born in Tynemouth, North Tyneside.

Lilian was a child prodigy whose first problem was published before she was 10 years old. Lilian was also an accomplished poet and painter like her mother. Although she had over 70 problems published by the age of thirteen, Lilian gave up chess composing while still in her teens.

(Lilian merits a full article in this place in her own right : added to ToDo list!)

According to the 1911 census the Baird family had relocated to Mountcoombe in Surbiton which appears, in 2021, to be Mountcoombe Close, Surbiton : a location for residential flats.

By the time of the 1881 census the Winter-Wood household (bar Edith) had relocated to “Mariestad(?)”, Hound, South Stoneham, Hampshire and had shrunk to Thomas, Eliza and a mere two servants.

In the 1891 census the Winter-Wood household consisted of Thomas (72), Eliza (64) plus Edith’s brothers Edward (43) and Carslake (42) all of whom were described as “living on means”. They had returned to three domestic servants : Mary Scoble (65), Carrie Stephens (22) and Kate Fruman (12). They lived at 14, The Crescent, Plymouth, PL8 2AP. Nothing remains of this property it would appear.

Edith was also a “good” archer and dabbled in painting and poetry : Edith was a champion archer (although she was vehemently opposed to hunting) and an avid bicyclist who was known to have ridden 25 miles (on one of those old style bicycles) to discuss an adjourned chess game.

On Friday, February 1st, 1924 Edith passed away. The probate record is dated April 29th and was granted to Herbert Percy Strong, a Lieutenant-Colonel in the Indian Army, who was the husband of Lilian. The initial value of the effects was £18110 5s 7d which was subsequently resworn to £16627 13s 11d.

She composed over 2,000 problems which were not profound but were noted for their soundness; only a dozen or so were faulted. Her Seven Hundred Chess Problems was published in 1902. She became deeply absorbed in retractors, and her other book The Twentieth Century Retractor appeared in 1907. They are two of the most beautiful chess books ever to appear, printed and bound by the King’s printer Henry Sotheran, and sold at less than cost.

Both Sunnucks and Golombek are silent on Edith. This is somewhat surprising since Anne liked to mention female players and problemists especially.

The dedication for The Twentieth Century Retractor was somewhat unusual :

“Dedicated to
The Sun
The Glorious Orb which
Animates and Beautifies
The Earth
By Giving It
Warmth, Light and Life”

and Edward Winter discusses the beauty of the book in Chess Note 3164.

From British Chess Magazine, Volume XLIV, (44, 1924) we have this obituary written by RC Griffth :

“A deep shadow has been cast over the chess world by the death of Mrs. W.J. Baird, which occurred on 1st February last at Paignton. The end was most unexpected, but it is a comfort to her relatives that the passing away was peaceful. She was the daughter of Mr. T. Winter-Wood, who and whose family have been identified with chess for generations. She was born in 1859 and composed her first problem in 1888, and it was not long after this date that she was the title of the “Queen of Chess,” since not only did she distinguish herself in a happy way as prolific composer, but proved a valiant opponent over the board, testified by her securing the ladies’ championship of Sussex in 1897.

Among her other accomplishments were painting, particularly illuminating, poetry (which may have been inherited from her gifted father) and archery, in which sport she was skilful. Her chess problems were generally of the light texture order never profound, but always pleasing to the ordinary solver. She must have composed over 2,000 problems of one sort or another, and this large output in about thirty-five years could not be conducive to highest results. Her problem tourney honours were numerous, though she did not as a rule see these, generally entering her problems to oblige admiring conductors of competitions.

In 1902 she published Seven Hundred Chess Problems and in 1907 The Twentieth Century Retractor, Chess Fantasies and Letter Problems, 320 illustrations (Sotheran & Co.). Both were editions de luxe. Mrs. Baird was credited with the being the originator of the complicated retractor of which she was a proficient exponent, but since she ceased composing these fancies, interest in them has waned.

During the last few years her activity, after a period of quiescence has been marked, her attention being directed principally to ‘Mutates’ and Picture or Letter Problems. In addition to the enthusiasm which, shown by her actual work, she has generously promoted several competitions, one still current in the Morning Post, particulars of which we announced last month. A remarkable feature of the deceased’s problems was their soundness less than one per cent, being cooked after leaving her hands, evidence of painstaking application!

There is now, since the decease of Mrs. Baird’s father, Mr. T Winter-Wood and her brother, Mr. E.J. Winter-Wood, only Mr. Carslake Winter-Wood left to represent the family in the chess circle, Mrs. Strong, her daughter, who at one time promised to emulate her mother, having apparently abandoned the game and its problems. There can be no question that Mrs. Baird stood in front of all lady composers, her nearest rival probably being the late Mrs. T. B. Rowland, and indeed a number of her compositions rank high in the world’s collection. We have not space this month to quote specimens, but hope to do so next issue.

Since the above was in type we have been informed of the sudden death of Mr. Carslake Winter-Wood on the 24th February.”

“Lay by the board, the problem is not sound;
There’s none can solve unless a Morphy’s found.”
* * *
A knight I saw, his royal head bowed;
Methought a bishop moved and prayed aloud.
The Queen, alas, and their attendants gone,
Only did the Kings linger sadly on.
And roaming far afield a Rook forlorn,
And here and there a long-forgotten pawn.
“Oh! is there none who can this problem solve?”
“Seek her round who our highest hopes revolve”
And so we brought it to our ‘Problem Queen’
Who faced the field with heart and eye serene.
* * *
“Go leave me now and I will rest awhile,”
Then hand outstretched and swift triumphant smile :
“The Bishops move! with him the key,” she cried –
“Life’s problem solved at last! I’m satisfied.”

White retracts his last move; then plays. Black moves so that White can mate at once.

Here is her Wikipedia entry

Here is more from chessproblem.net

Article from Tartajubow on Edith Baird and other Bairds

Via the Wayback Machine Chess Devon have this excellent article