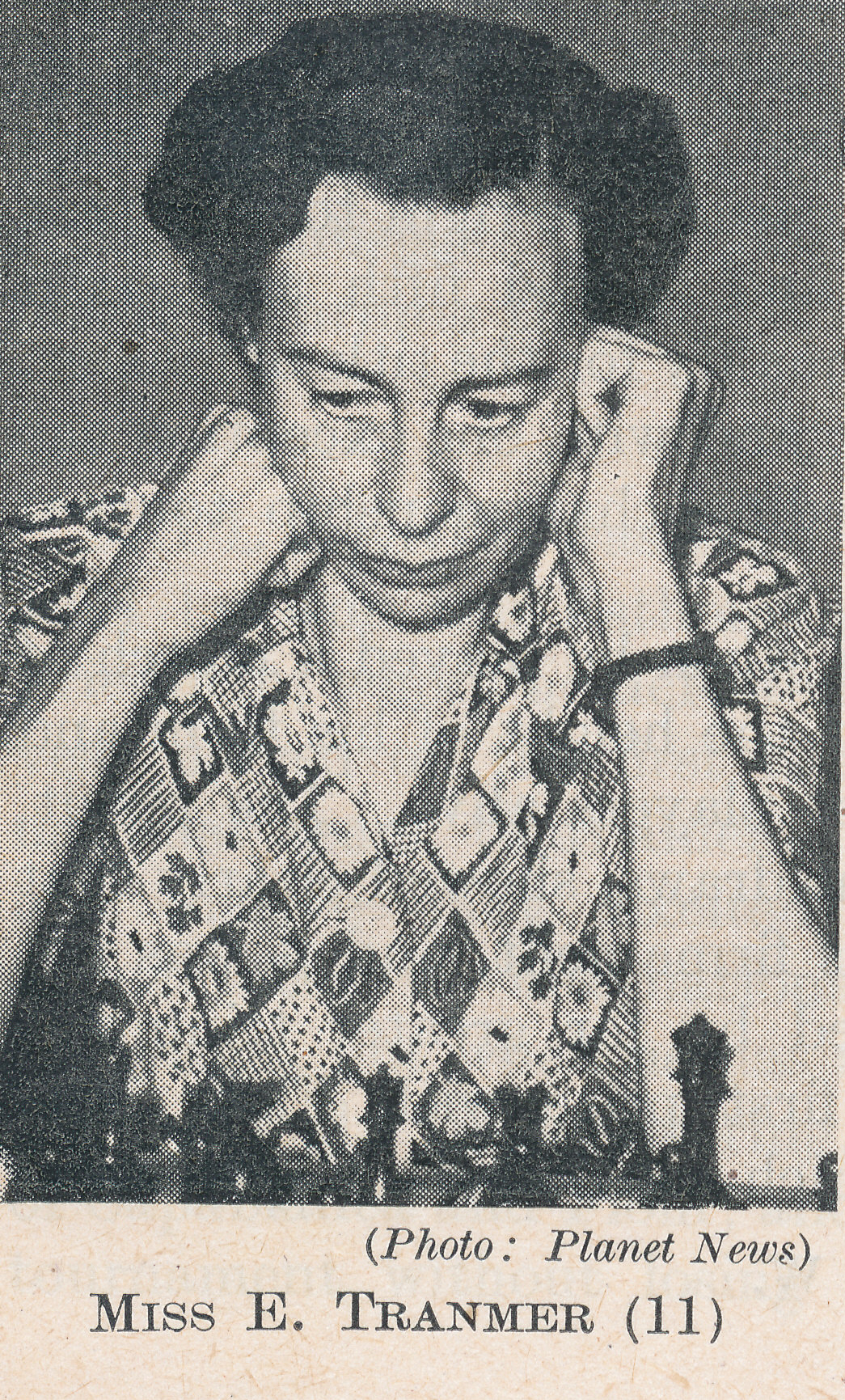 We remember WIM Eileen Betsy Tranmer who passed away on September 26th, 1983.

She was the first English woman to be awarded by FIDE the Woman’s International Master title in 1950.

“From The Anglo-Soviet Radio Chess Match by Klein and Winter :

Miss E. Tranmer was born in Scarborough, North Yorkshire in 1910, and learned chess at the age of six. She did not take it up seriously, however, until 1936. Under the tuition of W. Winter she has made notable progress, and her performances include a second prize in the British Correspondence Championship 1944, as well as first prize in one of the subsidiary tournaments at Hastings, 1945.

By profession Miss Tranmer is a musician and has played principal clarinet in the Scottish and Sadler’s Wells Orchestras.”

“Eileen Tranmer died in hospital at Ticehurst on September 26th after a long illness. Born in Scarborough, May 5th 1910, she was a professional clarinet player and played in a number of prominent British orchestras till forced to retire by deafness.

One of the leading British players in the two decades after the war, Eileen won the British Ladies Championship in 1947, 1949 (with a 100% score), 1953 and 1961, and played in the British Championship at Buxton, 1950. Her international record was sparse, as was the case with nearly all English players of that period. Nevertheless, she made her mark in the 1949-50 first post-war Women’s World Championship where she finished 5-7th in a field of 16, beating Bykova, again, and finished 7th in the field of 16.

We are grateful to WCM Dinah Norman for sending us these memories :

“Eileen Tranmer was one of the best English chess lady players of her generation.

I only played her once at Oxford in an International Ladies Tournament held between 24 July and 1 August 1971. Eileen totally outplayed me and I lost the game.

Eileen was a member of Acton Chess Club where there were three active lady players at that time. They were Jean Rogers, Olive Chataway and Eileen. Eileen lived in Acton then.

Eileen was a professional musician and had to stop playing when she became deaf which was dreadful for her.

In 1969 Eileen, Rowena Bruce and I were selected to play in the Ladies Chess Olympiad Team in Lublin, Poland. Sadly Eileen was taken ill just before the event so Rowena and I had to play all 13 rounds without a break. I was on Board 1 and at the end Rowena and I were exhausted and I had to withdraw from a tournament in the Czech Republic without playing a game. The food in Poland was awful so we said never again!

Eileen was very friendly with Harry Golombek. The expectation among the lady chess players was that they would get married but she never did. Harry did not drive and Eileen was very kind driving Harry and his elderly mother around.

Very sadly Eileen’s brother was killed in a car crash and after that Eileen suffered mental problems. Eileen lived near John and Jean Rogers and John said Eileen would turn up at their home in the middle of the night wanting to play chess.

The last time I saw Eileen was at Paignton. Her friend Olive Chataway brought her to Paignton and Eileen played in the bottom tournament and did badly. Eileen did not recognise myself or Rowena which was very sad.

Eileen later left Acton and moved to Tring. Eileen was a pleasant and modest person and was well liked. She had a good sense of humour.”

From the obituary in The Times of London we learn that her last few years were over-shadowed by an illness that preyed on her mind.

We take the following game from the August 1944 issue of BCM. The game was played in the BCCA Championship, and curiously enough there was an enquiry about that event to the BCF only a short while ago – a Georgian journalist wishes to quote that wartime performance as an early example of success by a woman in male chess company! ”

Gerald Abrahams in Not only Chess, wrote about Eileen (Chapter 18 : What Achilles Saw Among Women) as follows :

“To revert to the British Ladies, they were joined in the late 1930s by a very able pupil of Miss Menchik, the Yorkshire Clarinettist Eileen Tranmer; a woman whose chess I have seen to express some admirable qualities of mind and character. I had the privilege of watching her is Moscow in 1949-50, when, handicapped by influenza of a particularly virulent kind – what the Russians call “grippe” – she won some five or six consecutive games, to finish in the prize list of the new official Women’s World Championship. There had been two championships before, which Vera has won easily. Since Vera had unhappily perished in the Blitz, they looked at Moscow for her successor.”

Here is her Wikipedia entry