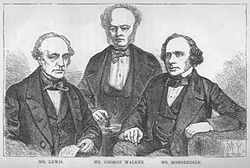 “English chess writer and propagandist. Born over his father’s bookshop in London he later became a music publisher in partnership with his father. At a time when he was receiving odds of a rook from Lewis he had the temerity to edit a chess column in the Lancet (1823-4); the first such column to appear in a periodical, it was, perhaps fortunately, short-lived. He tried his hand at composing problems, with unmemorable results; but his play improved. In the early 1830s he was receiving odds of pawn and move from McDonnell, after whose death (1835) Walker was, for a few years, London’s strongest active player.

Walker’s importance, however, lies in the many other contributions he made to the game. He founded chess clubs, notably the Westminster at Huttman’s in 1831 and the St George’s at Hanover
Square in 1843. From 1835 to 1873 he edited a column in Bell’s Life , a popular Sunday paper featuring sport and scandal. Many of his contributions were perfunctory, but on occasion he wrote at length of news, gossip, and personalities in a rollicking style suitable for such a paper. As with many of his writings he was more enthusiastic than accurate. He edited England’s first chess magazine The Philidorian (1837-8). Above all, Walker published many books at a low price: they sold widely and did much to popularize the game. The third edition of his New Treatise (1841) was as useful a manual as could he bought at the time and its section on the Evans gambit was praised by Jaenisch, Walker established the custom of recording games, and his Chess Studies (1844), containing 1,020 games played from 1780 to 1844, has become a classic. For the first time players could study the game as it was played and not as authors, each with his own bias, supposed it should be played. Throughout his life Walker helped chess-players in need. He raised funds for La Bqurdonnais, Capt. W. D. Evans, and other players, and often for their destitute widows.

After his father died (1847) Walker sold their business and became a stockbroker, reducing his chess activities but continuing ‘his many kindnesses. With an outgoing personality he enjoyed the company of those, such as La Bourdonnais, whom he called “jolly good fellows’, an epithet which might well be applied to himself. He was occasionally at odds with Lewis, who was jealous of his own reputation, and Staunton, imperious and touchy; but it seems unlikely that the easy-going
Walker, who believed that chess should be enjoyed, intentionally initiated these disputes. He left a small but excellent library of more than 300
books and his own manuscript translations of the works of Cozio, Lolli, and other masters. He should not be confused with William Greenwood Walker who recorded the games of the Bourdon-
nais-McDonne 11 matches 1834, and died soon afterwards “full of years’.

The Walker Attack is a variation of the Allagier Gambit :