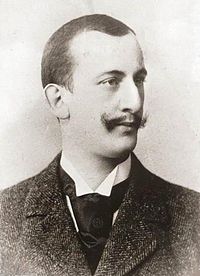 We remember Horatio Caro who passed away on Wednesday, December 15th, 1920.

His parents were (in the 1861 census) Jacob and Mathilda Caro (née Lüpschütz, possibly Lipschütz) living at 4, Warwick Place, Jesmond, Newcastle upon Tyne.

Horatio’s birth was recorded at Lombard Street, Newcastle upon Tyne.

Jacob and Horatio moved to Berlin to live at 2, Winterfeld Strasse. They both had joint German/British citizenship.

In 1896 Jacob passed away and his affairs were handled by family solicitors, Daggett and Grey of 3 Dean Street, Newcastle-upon-Tyne :

On December 15th 1920 JHD Reid, Master of the Institution of South Grove (a workhouse) recorded the discharge of Horatio. The reason stated was “dead”.

His death was registered in Mile End Old Town and he is buried in the East Ham Jewish cemetery, London Borough of Newham, Greater London located at Section E Row 18 Plot 14.

According to Wolfgang Heidenfeld in The Encyclopedia of Chess (Batsford, 1977), Harry Golombek OBE :

“A minor English master who spent most of his chess life in Berlin. Though he had indifferent tournament not much better match results (he lost to Mieses, and Winawer, drew twice with Von Bardeleben and beat Lewitt), his name has become immortal through the Caro-Kann Defence, which he expounded in his own journal, Brüderschaft, in 1886.”

The Caro-Kann Defence is characterised by

(as an alternative to the French Defence) in which the c8 bishop may be active from an early stage.

Caro famously was able to overcome Emanuel Lasker in just 14 moves in 1890 :

There is also the Caro Variation of the Ponziani Defence which was known since the 1850s and recommended by Caro in Deutsches Wochenschach, 1893:

“We can now add a tenth specimen to the collection (of ‘Rare queen sacrifices’), having noted the following position on page 81 of Brüderschaft, 10 March 1888 :

The magazine (see also page 155 of the 12 May 1888 issue) stated that in this game, played in February 1888 (in Berlin?), Horatio Caro mated his unidentified opponent in five moves as above.”

In another place we are grateful to Brian Denman who mentioned that  Caro made an  appearance for the Great Britain team in the 1898 cable match against America. He lost on board 3 against John Barry.

Also, according to Richard James :

“He spent most of his life in Germany. Page 353 of the JubilÃ¤ums-Ausgabe (1926) of Kagans Neueste Schachnachrichten (yes, I also read Edward Winter’s Chess Notes) claims that he lived in Frankfurt up to his 22nd year and in Berlin from 1882 onwards (arithmetic fail). Some sources claim, incorrectly, that he died in Berlin.

There is extensive discussion from the same above source.

Caro died in London at age 58.

His claim to fame is linked to the opening Caro-Kann Defence (B12), which he analysed along with Marcus Kann and jointly published about on the German journal Bruederschaft in 1886.”