An event every year that begins at 12:00 am on day 14 of February, repeating indefinitely 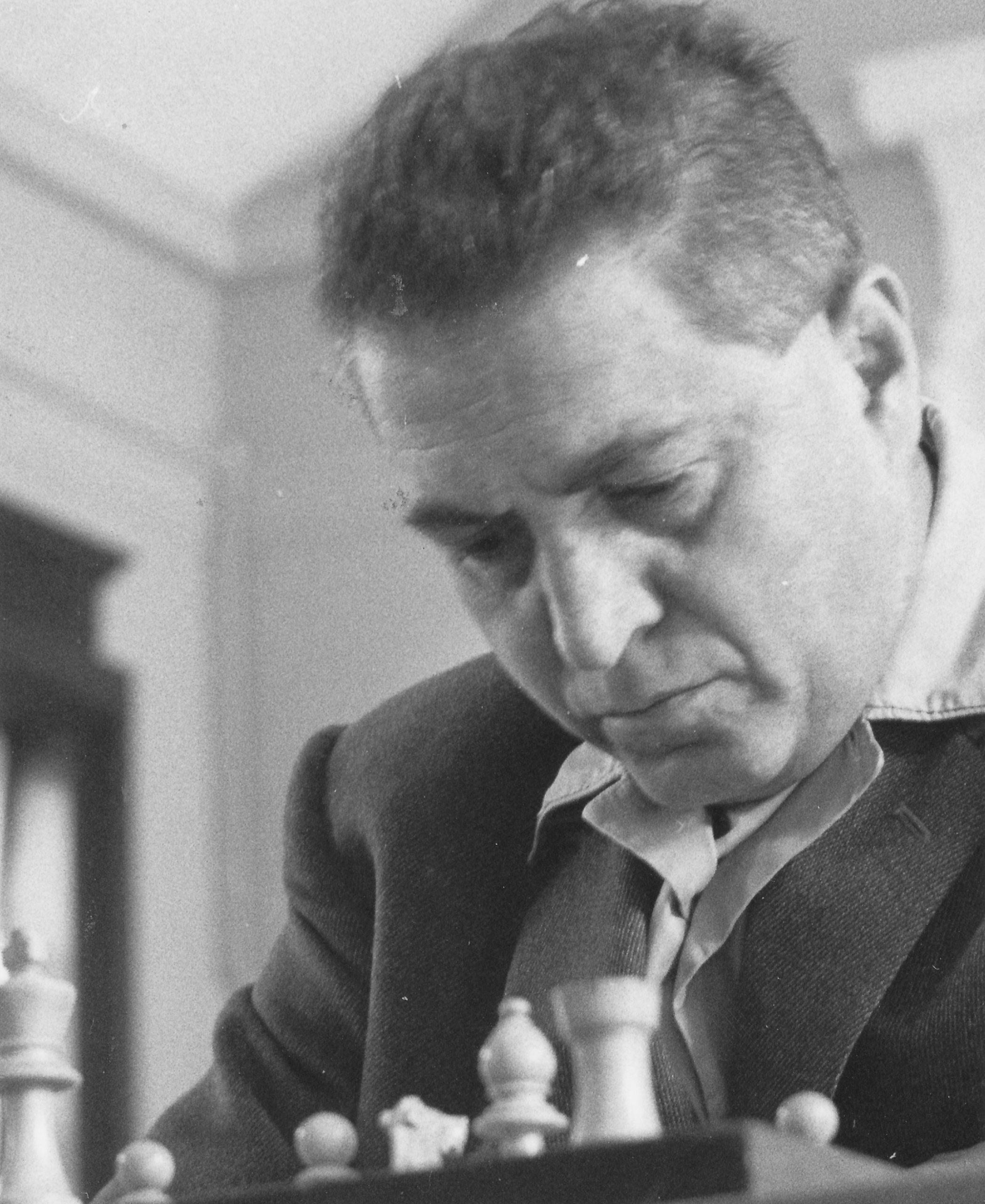 Čeněk Kottnauer was born in Prague on Thursday, February 24th, 1910. Čeněk was employed in the Ministry of Education in Prague.

Whilst playing in the Lucerne International tournament (28-xii-1952 03-i-1953) he sought political asylum :

From the Milwaukee Journal, January 3, 1953 we have

Lucerne, Switzerland – Cenek Kottnauer, 42, Czecho-Slovakian chess champion and an employee of the ministry of education in Prague, announced Saturday that he would not return to Czech-Slovakia and would request political asylum in Switzerland. Kottnauer had been participating in a chess tournament.

He said that the political situation in his country had grown “more and more critical” and he wanted “to leave before it is too late”. He said that he had been divorced recently and had no children in Czech-Slovakia”.

In a January 2009 post to the English Chess Forum Leonard Barden wrote :

“Cenek Kottnauer defected from Czechoslovakia during the Lucerne New Year tournament of 1952-3 (I am precise on this because I was present). His wife Daniela joined him there, having been smuggled from Prague in the boot of a diplomat’s car. Kottnauer had been a water polo player of international standard before 1939 so came into serious chess only his mid-30s. He made his name with his good showing in the Prague v Moscow match of 1946 and his Bxh7+ win then against Kotov. He competed in great tournaments like Groningen 1946 and Moscow 1947; his first visit to England was in 1947 when the Czech team came here.

In the 1940s he had a job in the Czech sports ministry but got implicated in the purges following the Slansky trial. He also believed that Pachman and Opocensky were involved in the campaign against him.”

Čeněk married Daniela (née Horska, also Czech, having met in Austria) and they had a son Daniel VR Kottnauer. Daniela was born in 1934 and was 24 years younger than Čeněk. She died on February 20th 2008 in a hospice in Essen, Germany close to where Daniel currently resides.  Daniel has been a pianist and singer for 30 years, an event manager for 19 years and a coach and VIP limousine driver for 5 years and may be found on LinkedIn.

“The obituaries of Čeněk Kottnauer (1910-1996) have, in common with all of the encyclopaedia entries on him, been strangely wanting in pre-1940s references to his chess career. Czech magazines of the 1930s contain occasional games by ‘Kottnauer’ (no forename or initial given), including the following :

International Master (1950), International Arbiter (1951), a Czech player who emigrated to England in 1953 and was naturalised in 1960. He played in Olympiads for Czechoslovakia (1950*, 1952), on the second occasion making the best score (+10=5) on the fourth board, and in two Olympiads for England (1964, 1968). In 1961 he won the Beverwijk Masters tournament (not the concurrent grandmasters event) with a clean score, a fine achievement.

*Ed : In fact, this is not true since Czechoslovakia did not send a team to Dubrovnik 1950.  This was the last year the event was limited to sixteen countries.

Consulting the 2nd edition (1992) of Hooper & Whyld may cause disappointment since there is no entry for CK.

Born on 24th February 1910. Kottnauer represented Czechoslovakia in the 1952 Olympiad in Helsinki. In the years after the war his successes in international tournaments included 3rd at Beverwijk 1947, =2nd at Vienna 1947, 4th at Bad Gadstein 1948 and 1st at Lucerne 1953.

After the Lucerne tournament he sought political asylum in Switzerland. He later settled in England and became a naturalised British citizen. He played for the British Chess Federation in the Olympiads of 1964 and 1968.

“Born in Czechoslovakia, Kottnauer played for that country in many events including the 1952 Olympiad. He emigrated in 1953 and subsequently took British nationality, representing England in the Olympiads of 1964 and 1968. Awarded FIDE titles of international master in 1950 and International Judge in 1951. Winner of Lucerne 1953 International tournament.

Co-author with TD Harding and GS Botterill of The Sicilian Sozin, Batsford, London, 1974.”

From British Chess (Pergamon Press, 1983) we have this insight from Tim Harding :

“At a time when home-grown International Masters were thin on the ground in Britain (the 1950s and 1960s) this Czech-born IM brought a lot of valuable experience to BCF teams.

When FIDE rating lists appeared in the early 1970s, Kottnauer was listed at 2370 but by this time had more or less retired from active play at the top level, although he took (and still takes) a keen interest in coaching promising young players, He was one of the most regular and most valuable coaches at the one-day junior training events organised by the London Chess Association at the Mary Ward Centre in Bloomsbury, London in the mid-1970s.

At this time he also wrote many articles for his friend Grandmaster Pachman, who had been freed to live in West Germany where he became editor of Schach-Archiv, and also made a major contribution to the Batsford opening theory work. The Sicilian Sozin, written in collaboration with George Botterill and Tim Harding, and published in 1974.

Kottnauer’s most active years as a player were however 1946-53; in the year that he came to England he took first prize in the Lucerne, 1953 International tournament. Had he been a professional player throughout the the 1950s, there is little doubt that he would have become a grandmaster.

As early as the end of the war, when regular play resumed, he was almost of that strength (as wins against Kotov and Smyslov in the February, 1946 Prague v Moscow match showed) but lacking in experience at the top level, which told against him at Groningen, 1946, when he was placed 13th with 9 points out of a possible 19 in a very strong field.  This was the first great post-war tournament, with nine Master and eleven Grandmasters (including Botvinnik and former world champion Euwe).

Also in 1946 Kottnauer scored wins against Simagin (in Prague) and Levenfish (in Leningrad) and was clearly one of the up-and-coming stars in a strong Czech team that included Filip and Pachman.  In 1950 he was one of the first players to be awarded the FIDE title of International Master.

The following year he was also made a FIDE International Judge (now known as FIDE Arbiter).

Unfortunately there was no Czech representation at the Dubrovnik, 1950 Olympiad, but in 1952, one of his last appearances for Czechoslovakia, Kottnauer achieved a remarkable record playing board four (below Filip, Pachman and Sajtar) at the Helsinki Olympiad. He went through unbeaten with ten wins and five draws (83.3%) and easily won the board prize.

Kottnauer shortly thereafter came to England where he eventually made a successful career as an executive with Trust House Forte’s hotel group; he has also helped with the BBC overseas service Czech-language broadcasts. He lives in West Central London with his wife and their son.

The following is undoubtedly Kottnauer’s most famous win.

and here we have the same game analysed by Tryfon Gavriel :

A giant of a man, a fine athlete and swimmer, he was born on 24th February 1910 and came to prominence in the 1942 tournament in Prague in which Alekhine took part. He extended the great man to 70 moves before resigning. His wins against Kotov and Smyslov in the Moscow-Prague match of 1946 and his 13th place in the great Groningen tournament of the same year confirmed his status, as did his excellent showing for Czechoslovakia in the 1952 Olympiad at Helsinki (+10=5-0 on fourth board). He also took part in the 1947 Chigorin Memorial in Moscow, and won a tournament at Lucerne in early 1953, the same year in which he emigrated to Britain.

On this form he would have gained the GM title had he continued playing, but he had to take a full-time job (with Trusthouse Forte) to support his family.

Čeněk had met his much younger wife in Austria, though she too was Czech. They had a son. The master’s appearences were therefore limited to London League matches and other sporadic events. That he had lost none of his skill was shown when he played top board for England at the 1964 Tel-Aviv Olympiad (Penrose was not available) and made +8=7-3. His only other big event was the Lugano Olympiad of 1968 when he was on second board and made +3=5-4.

Čeněk (pronounced CHEnek) Kottnauer was one of the early professionals in the German Bundesliga; on a visit to his Bayswater flat in 1995 by Murray Chandler and myself, Čeněk told us about the great transport difficulties he had in those days. He mentioned that he had recently had a heart bypass operation and showed us the medication he had to take on a regular basis, opining that after Golombek and Milner-Barry he would be the next to go.

Čeněk was involved in junior coaching in London for many years, wrote extensively for the Dutch and German press and in recent years was a regular visitor to the Lloyds Bank Masters to see old friends and acquaintances. Amongst those he coached were Julian Hodgson, William Watson and Dharshan Kumaran, as well as Stuart Conquest.

In Stuart’s case he came regularly to Hastings to do the coaching which was financed by the Slater Foundation and by Lloyds Bank.

The fruit of his effort was Stuart’s 1981 World U-16 title in Argentina, where Čeněk’s great physical strength came in handy when the huge trophy had to be carried back to Britain.

All his pupils and friends will attest to his wonderful manner. A great personality has left us.”

According to Leonard Barden “Čeněk’s students included Demis Hassabis, then aged six.   He once told me that Dharshan Kumaran, then seven, was the more talented of the pair  but that Demis was also ‘very clever and tricky’ ”

Daniel tells us that Nigel Short visited his family home for coaching and we believe that both Anita and Mira Rakshit were CKs students. Doubtless there were many more…

“After he retired he did chess coaching and, although never named in the BCF’s list of coaches, was the most successful of all in terms of achievements by those he taught. He normally did weekly sessions of a couple of hours and got results through his challenging and sceptical approach to ideas from his pupils.

Kottnauer pupils included Hodgson, Watson, and Kumaran, who all became grandmasters. When he came to our junior invitation tournaments in the mid-seventies I used to give a prize of a game and session with him to exceptional talents. So he played Nigel Short in spring 1975 (probably Short’s first one-to-one with an IM) and was enthusiastic about his promise.

In 1981 when Stuart Conquest was going to the the world U16 championship in Argentina Cenek coached him for several months beforehand and went with him to the event. No news reports were available during the tournament so the first I knew was when Cenek phoned me on his return to London and complained that he was tired having to carry this enormous trophy home (Stuart had broken his arm before the event and played in a sling) and how the food had been terrible but that Eliskases, who was involved in the organisation, had sworn him to secrecy.

I used to visit him a couple of times a month for talk and blitz sessions and have warm memories. A great guy, and a significant figure in the long departed English chess boom.”

Here is an excellent article from Tim Harding originally  on chesscafe.com but now via the Wayback Machine.

Here is an obituary from Bill Hartston

And finally, according to chessgames.com :

“Cenek Kottnauer was born in Prague. He was awarded the IM title in 1950 and became an International Arbiter in 1951. Kottnauer played the Helsinki Olympiad 1952 on board 4 for Czechoslovakia, scoring +10 =5 -0. In 1953 he won the Lucerne international tournament. That same year, he emigrated to England, and eventually became a naturalized citizen and played for England in the Olympiads of 1964 and 1968. In the 1970s he became one of England’s top coaches of young players.”