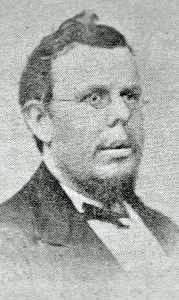 We remember John Wisker who passed away on this day, 18th January, 1884.

John Wisker (30 May 1846 in Kingston upon Hull, England – 18 January 1884 in Richmond, Victoria) was an English chess player and journalist. By 1870, he was one of the world’s ten best chess players, and the second-best English-born player, behind only Joseph Henry Blackburne.

Wisker moved to London in 1866 to become a reporter for the City Press and befriended Howard Staunton. His proficiency at chess improved rapidly, and he won the 1870 British Chess Championship after a play-off against Amos Burn, ahead of Blackburne, the defending champion. He won again in 1872 after a play-off against the first British champion, Cecil Valentine De Vere. After this second victory, the British championship was not resumed until 1904. Wisker edited chess columns for The Sporting Times and Land and Water. From 1872 to 1876, Wisker was Secretary of the British Chess Association and co-editor of The Chess Player’s Chronicle. After learning that he had contracted tuberculosis, Wisker emigrated to Australia in the autumn of 1876 to try to regain his health. In Australia, he wrote a chess column for the Australasian. In 1884, Wisker died from bronchitis and tuberculosis.

Here is a short item from the Ken Whyld Association web site :

and here is a more detailed article from chess.com

From The Oxford Companion to Chess by David Hooper & Ken Whyld :

John Wisker was an English player and journalist. After moving from Yorkshire to London in 1866 Wisker improved rapidly, so that in the early 1870s he could be ranked among the world’s best ten and second only to Blackburne among English-born players. In 1870 Wisker won the British Championship ahead of Blackburne (the holder) after a play-oil against Burn, and in 1872 he again won the title after a play-off against De Vere. (winner of the first British Championship). By winning twice in succession Wisker retained the trophy and the contests ceased until 1904 (when
Napier won). Against two of his contemporaries Wisker played six matches: Bird in 1873 (+6 =1 -6 and +4 =3 -7) and again in 1874 (+10 =3 -8 and +3 =1 -5); and MacDonnell in 1873 ( = 1 -3) and 1875 ( + 7 =4 -4), Discovering that he had tuberculosis, Wisker emigrated to Australia in the autumn of 1876, hoping to improve his health. In England he edited excellent chess columns in The Sporting Times and Land and Water, and was co-editor of the Chess Player’s Chronicle from 1872 to 1876; in
Australia he edited a chess column in the Australasian.

British Champion in 1879 and 1872 and Hon. Secretary of the British Chess Association from 1872 – 1877. Wisker was born in Hull. His parents were poor and, he received little schooling, but by his own efforts educated himself and by the time he was 19 was contributing articles to the Fortnightly Review. In 1866 he came to London to report for the City Press and was introduced to London chess circles by Howard Staunton. His play rapidly improved, and his victory in the British Championship in 1870 was achieved after a ply-off against Burn, ahead of Blackburne. In 1872, by successfully defending his title, he won the BCA Challenge Cup outright. On this occasion he won a play-off against De Vere. In 1872 Wisker became co-editor with Skipworth of the Chess Player’s Chronicle.

in 1875, Wisker was found to have consumption, and two years later. on medical advice, he emigrated to Australia. He became chess editor of The Australian, an appointment which he held at the time of his death. He died on 18th January 1884 from bronchitis on top of consumption.

From The Encyclopedia of Chess by Harry Golombek :

A prominent British player and chess administrator. Wisker won the BCA Challenge Cup in 1870 after a play-off with Burn. In 1871 he narrowly lost (+2 -3 =4)a match to the French master Rosenthal, who had fled to London to avoid the rigours of war. Wisker retained the Challenge Cup in 1872, this time after a play-off with De Vere. In the following year Wisker played a series of matches against Bird, drawing the first (+6 -6 =1) losing the second (+4 -6 =2) and winning the third (+10 -8 = 3).

From 1872 to 1877 Wisker was secretary of the BCA and jointly edited the Chess Player’s Chronicle. wisker suffered from consumption and in 1877 under doctor’s orders emigrated to Australia where he died (H.G.)