An event every year that begins at 12:00 am on day 4 of March, repeating indefinitely 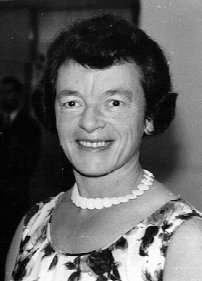 Nancy Conchar Gordon was born on Tuesday, May 25th 1915. On the same date was born Robin Day in High Wycombe who went on  to design the polypropylene stacking chair.

Nancy was born in Kirmabreck, Kirkcudbrightshire in the Dumfries and Galloway council area of Scotland.

In the 1939 register Nancy was living at 18 Thornton Avenue, Urmston. Manchester, M41 5DJ with a married couple, William Furnish (a railway time keeper) and Gertrude Furnish who performed unpaid domestic duties. Presumably Nancy was a lodger.

Her occupation was given as a teacher of music and physical training. At this time she was single at the age of twenty-four.

In the mid-1940s Nancy relocated from Manchester to Dundee where she continued her teaching career at Dundee High School. During that time she encouraged and coached a number of players some of whom represented Scotland.

In 1950 in Tealing, Angus, Scotland Nancy married David Livie Elder. They had a daughter Christine who played chess as a junior. Tealing has a strong connection with the Elder family.

According to Alan McGowan (Chess Scotland): “She was the main instigator in forming both the Schools’ and Primary League in Dundee, and she assisted in the organisation of the Dundee 1967 International Centenary Tournament.”

When she passed away Nancy was living at 39 Whitefauld Road, Dundee, DD2 1RJ :

Her passing was reported in the Dundee Courier and Advertiser  on March 6th 1981 as follows :

Mrs Nancy Elder 39 Whitefauld Road, Dundee, a former music teacher at Dundee High School and one of Scotland’s best known chess players, has died after taking ill on a flight to Australia.

She was off for a long holiday which she planned to spend with relatives and friends from the world of international chess, but, after suffering a heart attack on a plane from Singapore, had been in intensive care in Perth, Western Australia.

Her daughter Christine, a primary school teacher in Tighnabruaich, received daily telephone reports on her mother’s condition from a cousin and, at the weekend, heard that she was improving gradually.

The shock news of her mother’s death came late on Wednesday night.

Mrs. Elder, who went into semi-retirement recently, has been to the fore in chess for about 35 years at local, national and international levels.

She has represented her country five times, having taken part in the chess Olympiad in Yugoslavia in 1963 and 1973, in Israel in 1976, in Buenos Aires in 1978 and in Malta last year.

She turned down the chance to take part on three other occasions.

She was awarded the MBE for her services to chess in 1974.

She started playing chess during her school days with her brother and the two of them were more-or-less self taught.

It wasn’t until after the Second World War that she received any sort of coaching, by which time she had established her own style.

She retired on April 14th last year after 24 years in the music department of Dundee High School, where she specialised in teaching the oboe.

She continued to teach privately.

“Nancy C. Elder, MBE, died in Perth, Western Australia on March 4th 1981. Mrs. Elder had recently retired after a lifetime of teaching, her last post being in Dundee. I well remember her account of teaching under difficult conditions in World War 2 in Manchester. 15 Scottish Women’s Champion (the record for the event which she set-up at Troon in 1980).

Mrs Elder was a regular competitor in the British Women’s Championship (sometimes in rivalry with her daughter Christine) and showed her playing strength with a score of 5.5/12 on board two for Scotland at the Women’s Chess Olympiad, Malta, 1980.

I am sure she will be best remembered though for her decades of effort in the organising of chess in Scotland, particularly for juniors and in schools, in recognition of which she was awarded the MBE, the only such honour ever given for services to chess ‘north of the border’ as Alan Borwell puts it in his Newsflash obituary.”

We are grateful to Helen Milligan who told BCN :

My most memorable incident was when I refused to play in the Scottish Ladies at the annual Congress, preferring to try to improve my chess by playing in the Open section (really the B-Grade, below the Championship proper). I got given a piece of Nancy’s mind for that – she did not approve!

Here are her playing records from the Olympiads.

Here is a potted biography from Chess Scotland.