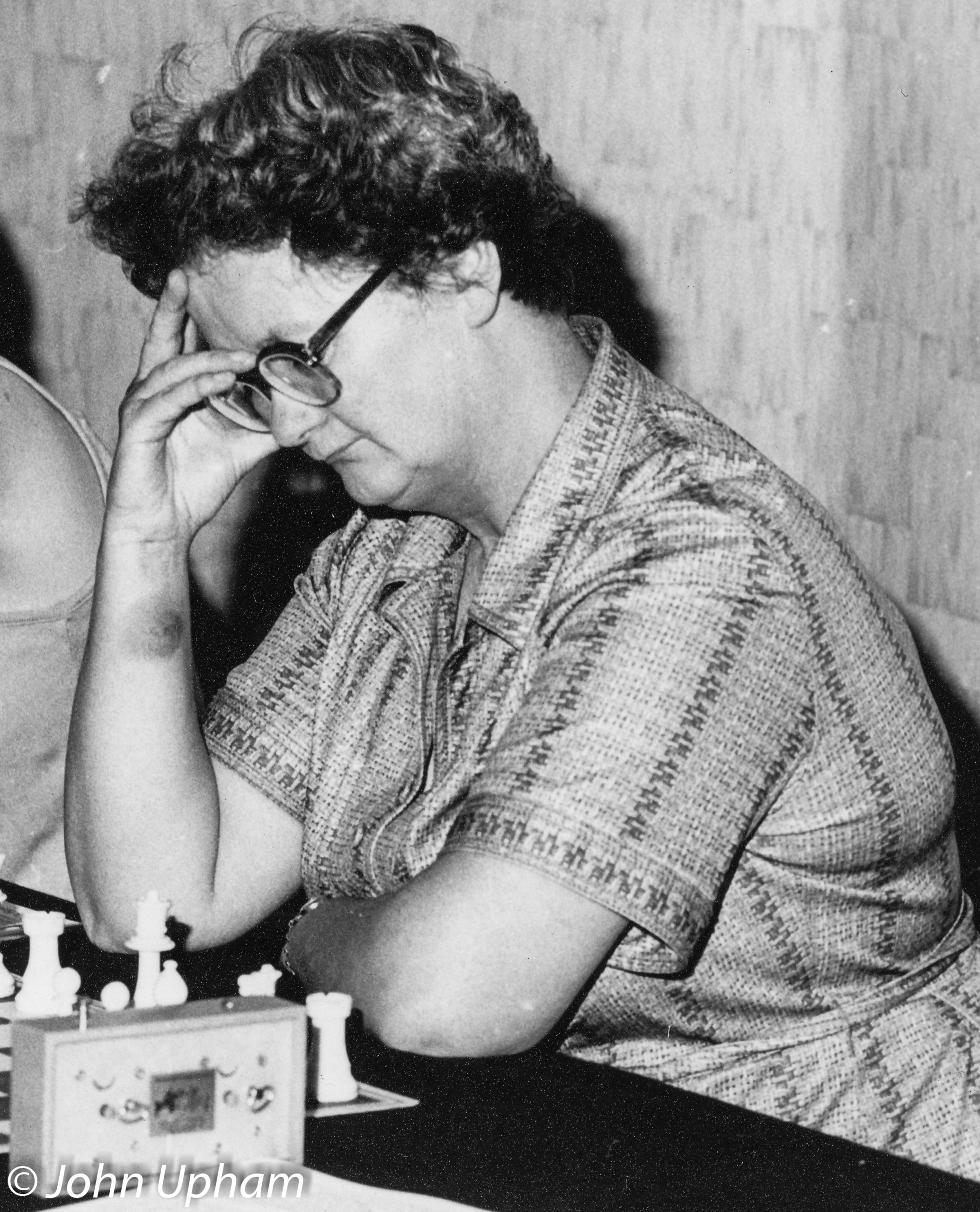 “International Woman master and British Women’s Champion 1957, 1958 and 1964. Her best international result was a 2nd in the 1954 Western European Zonal. This qualified her for the 1955 Women’s Candidates tournament, but as this held in the USSR and she was at the time serving as a Major in the British Army, the authorities would not give her leave to participate.

Miss Sunnucks has represented England a number of times in Olympiads and team matches. She has compiled The Encyclopedia of Chess, London, 1970.”

Born on 21st February 1927 Anne learned the moves at the age of 8 but did not take up chess seriously until she was 21, when she joined the same club as International Master, Imre König” whose pupil she became.

In the 1954 Western European Zonal tournament, she came 2nd and qualified for the 1955 Women’s Candidates tournament but was unable to compete.

She played for Great Britain v. the USSR in 1954 and for the British Chess Federation team in the Women’s Chess Olympiads of 1966 and 1972. She also represented the BCF in the Western European Zonal tournaments of 1963 and 1966.”

Anne created Camberley Chess Club in 1972. She offered to open her spacious home at 28, Brackendale Close, Camberley for weekly club nights and matches.

Anne was a director of BMS (?, Mothersill, Sunnucks) Chess Supplies Ltd. which retailed chess books and equipment which the grateful membership purchased !

Anne passed away on November 22nd, 2014 at a retirement village in Meadow Park, Braintree, Essex.

From Brian Towers : It is also worth noting that she was an occasional contributor to the weekly chess ‘Magazine’ programme which was broadcast on the Third Network (the precursor to Radio 3) between Autumn 1958 and Summer 1964.

According to Megabase2020, her highest Elo rating was 2045 but we suspect it was in reality, quite a bit higher.

In 1972 Anne was awarded with a FIDE Medal of Merit.

For much of her early chess life Anne was coached by IM Imre (Mirko) König.

She was educated at Wycombe Abbey School[2], Buckinghamshire. Although she learned how to play chess at the age of 8, she did not play seriously until the age of 21, when she joined the same chess club as Imre König, who became her tutor. By finishing tied for second place in the 1953 British Women’s Championship she became one of three British representatives in the 1954 Western European Zonal.

Sunnucks earned the Woman International Master title by placing second in the 1954 Western European Zonal. Although this result qualified her to play in the next event in the Women’s World Championship sequence, she was a major in the Women’s Royal Army Corps and the authorities would not allow her to travel to the USSR where the 1955 Women’s Candidates tournament was being held. Sunnucks represented England several times in Olympiads and team matches, including Great Britain vs. USSR 1954, the Anglo-Dutch match in 1965, and top board for the British Chess Federation (BCF) team at the 1966 Women’s Chess Olympiad at Oberhausen. She participated in the Women’s World Championship cycle two more times, representing the BCF in the Western European Zonal tournaments of 1963 and 1966. Sunnucks won both the Army and the Combined Services Championships in 1968, and was the only woman to compete in either. Sunnucks compiled The Encyclopaedia of Chess (1970, second edition: 1976).

Her married name was Anne Mothersill.”