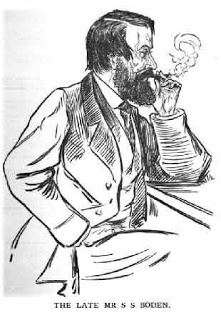 We remember Samuel Boden, who passed away on this day, Friday, January 13th in 1882 at 3 Tavistock Street, Bedford Square, Middlesex.

(Several secondary and tertiary sources give the birth month as April. It would appear that a transcription error was responsible.)

James was an Independent Congregational Minister who worked in West Retford and was responsible for recording parish birth and baptismal (and probably marriage) records including those of his own children.

Samuel was baptised by his father (for the first time!) on July 27th at Chapel Gate (independent) Church.

Samuel had at least nine siblings and the details of these plus other family members (including multiple baptisms) may be found on Steve Mann’s Yorkshire Chess History.

Born in Hull on 4th April 1826, Boden first came to the notice of British chess players when he won a provincial tournament in 1851. In 1858 he played two matches against John Owen , winning both, the first by +5 -3 =1 and the second by +5 -1. He played in very few major tournaments and his strength ws judged mainly from friendly games and small tournaments. He was the author of A Popular Introduction to Chess and conducted the chess column in The Field for 13 years.

He died of typhoid fever on 13th January 1882 and is buried in Woking, Surrey.”

According to Steve Mann :

“He was buried on 17/01/1882 at Brookwood Cemetery, Brookwood, Surrey. This cemetery was also known as the London Necropolis, having been specially instituted to take London’s dead at a time when space within London was becoming scarce. A transcription of the Surrey Burial Registers gave his name as “Samuel Standage Boden” and his age to be 55. The burial date, the deceased’s age, and the nature of the cemetery, together make it clear this was the chess-player, even though they misspelt his middle name.”

From The Oxford Companion to Chess by David Hooper & Ken Whyld :

English player active in the 1850s. In 1851 he wrote A Popular Introduction to the Study and Practice of Chess, an excellent guide introducing the Boden-Kieseritzky Gambit which at once became popular. In the same year he won the ‘provincial tournament” run concurrently with the London international tournament. At Manchester 1857, a knock-out event, he came second to Lowenthal— he drew one game of the final match and then withdrew. In 1858 Boden defeated Owen in a match ( + 7=2-3) and he played many friendly games with Morphy, who declared him to be the strongest English player; since Staunton and Buckle had retired this judgement was probably right. Also in 1858 he restarted the chess column in The Field , handing over to de Vere in 1872. The column has continued uninterruptedly ever since. Besides chess and his work as a railway company employee Boden found time to become a competent amateur painter and an art critic.

From The Encyclopaedia of Chess by Harry Golombek OBE :

Most players will be familiar with this mating pattern that is Boden’s Mate using two bishops in a cross pattern.

Here is an example puzzle from 1001 Chess Exercises for Club Players that demonstrates the pattern :

White to play and checkmate.