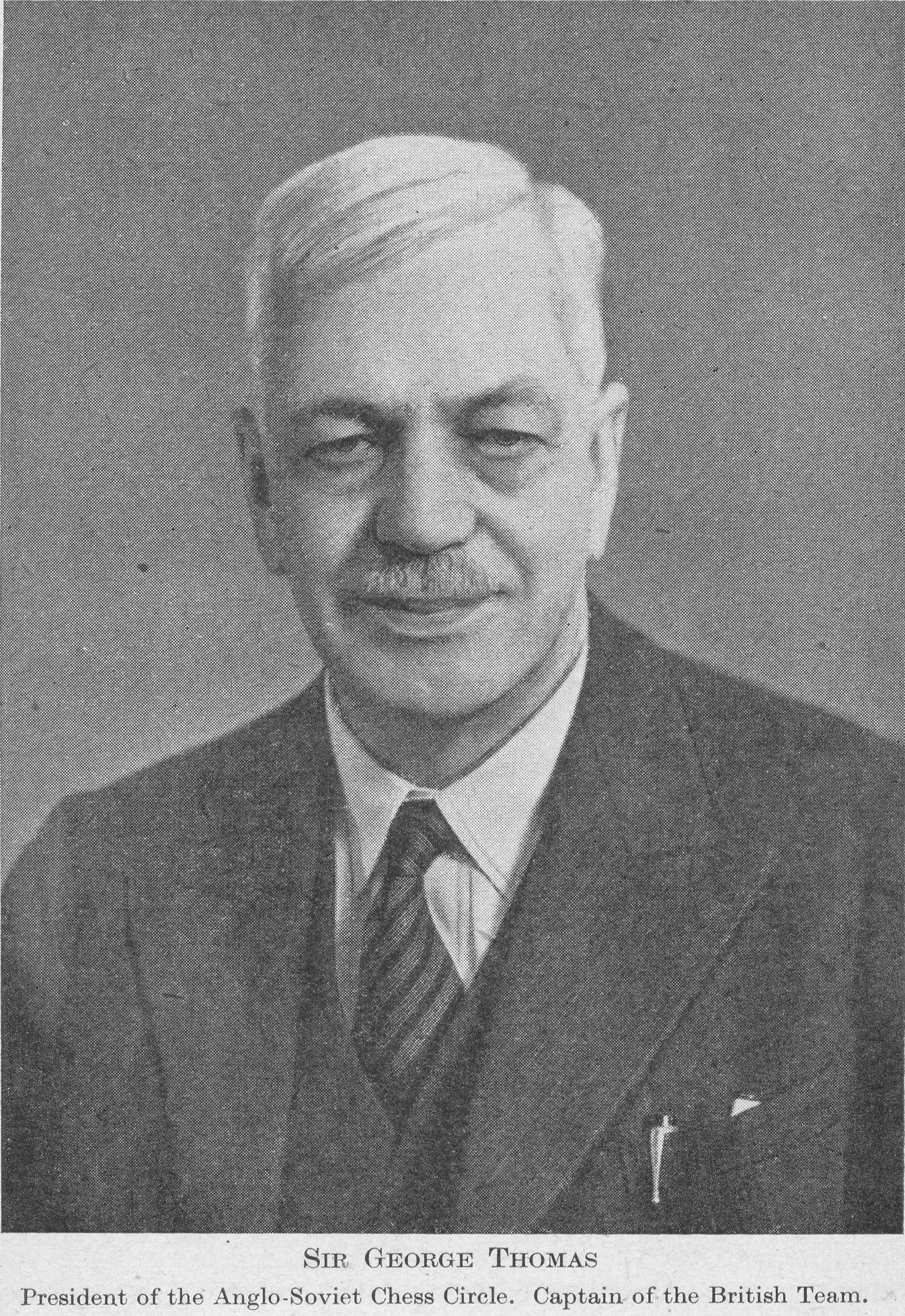 Thomas was an all-round athlete who excelled at tennis, hockey and badminton as well as chess. He captained the English badminton team and was All England Badminton Singles champion from 1920 to 1923.”

Here is an excellent article (albeit stating GT was a Grandmaster and was president of the British Chest Federation!) from the National Badminton Museum.

In international tournaments his greatest successes were 1st at Spa (ahead of Tartakower) and =1st at Hastings 1934/5 (tied with Euwe and Flohr, ahead of Capablanca and Botvinnik).

He was known for his keen sense of sportsmanship and for his ability to encourage and inspire younger players. He served for many years on the BCF Junior selection committee and was for a time Games Editor of the British Chess Magazine. FIDE awarded him the titles of international master (1950) and International Judge (1952). (article by Ray Keene)”

Thomas with the White pieces was predominantly a Ruy Lopez devotee.

With the Black pieces against 1.e4 he defended the Lopez and the Queen’s Gambit Declined was his favourite versus 1.d4

Sir George Thomas was born in Constantinople on 14th June 1881. His mother, Lady Thomas, won the first ever ladies’ tournament, which was held in conjunction with the Hastings International Chess Tournament of 1895.

He learned the moves at the age of 4, and as a boy met many of the world’s leading players, including Steinitz, Lasker, Tchigorin and Pillsbury, in his mother’s drawing-room.

Apart from serving as a subaltern in the Army during the 1914-1918 war, Sir George has devoted his life to sport. He played tennis at Wimbledon, played hockey for Hampshire, captained the English Badminton team and was All England Badminton Singles Champion from 1920-1923 and doubles champion nine times.

His first appearance in the British Championship was in he came 2nd. He also came 2nd in 192l and in 1923 won the first time, thus becoming British Chess Champion and
Badminton Champion in the same year. Sir George’s best performance was at Hastings 1934-1935, when he came =1st. In the last round he needed only a draw against R. P. Michell to come lst, ahead of Euwe, Capablanca, Flohr and Lilienthal, but he lost and had to be content with sharing lst prize with Euwe and Flohr.

During his career he has beaten Botvinnik, Flohr and and drawn with Nimzowitsch, Rubinstein and Capablanca. He been noted for his sportsmanship and for his interest in and encouragement of young players.

Since his retirement until the last few years, Sir George continued to attend tournaments as a spectator.

He is the author of The Art of Badminton, published in 1923.

Most interestingly we have this this splendid article from Neil Blackburn (SimaginFan) on chess.com

and here is Part III of Matthew Sadler’s article

“English player. International Master (1950), International Arbiter (1952), British champion 1923 and 1934. His mother, who taught him chess, was winner of one of the first women’s tournaments, Hastings 1895, He played in more than 80 tournaments and achieved his best result at Hastings 1934-5 (about category 9), when he scored +6-1—2 to share first prize with Euwe and Flohr ahead of Botvinnik and Capablanca. Thomas played in seven Olympiads from 1927 to 1939, and in the first the highest percentage score was made by him ( + 9=6) and the Dane Holgar Norman-Hansen (1899- ) (+11=2—2). A leading English player for more than 25 years, Thomas fought many battles at the famous City of London club, winning 16 of the annual championships from 1913-14 to 1938-9. In his sixty-ninth year he gave up competitive chess when, after a hard game, ‘the board and men began to swim before my eyes,’ He continued his active interest in junior events and his visits, now as a spectator, to chess events.

A man of few words, imperturbable, of fine manners. Sir George Thomas was respected throughout the chess world for his sportsmanship and impartiality, and his opinion was often sought when disputes arose between players. The inheritor of both a baronetcy and private means, he
devoted his life to games and sports. Besides his chess he was a keen hockey player, a competitor in international lawn tennis (reaching the last eight at Wimbledon on one occasion), and winner of about 90 badminton titles, notably the All-England men’s singles championship which he won four times, from 1920 to 1923.”