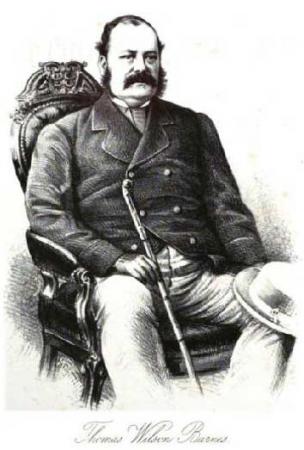 From The Oxford Companion to Chess (OUP, 1984) by David Hooper and Ken Whyld :

“One of the strongest English players during the 1850s, He made little impression in his one and only tournament, London 1862, but is remembered for having scored more wins than anyone else in friendly play against Morphy in 1858. He reduced his corpulence by 130 pounds in ten months and as a result died. ”

He is perhaps most well know for having a reasonable score against Paul Morphy of -19 +8 which was a lot better than most !

“Thomas Wilson Barnes was one of the strongest English players in the 1850s. His only tournament appearance was in London 1862 but he did not do himself justice. He’s best remembered for having more wins against Paul Morphy in friendly play than anyone else. Being overweight he decided to reduce his size, but the loss of 130 pounds in 10 months was more than his system could handle and resulted in his death in 1874.”

The Barnes Opening, was played by T. W. Barnes. This opening move has no particular merit but he liked to avoid book lines, to which end he
sometimes answered 1 e4 by 1…f6.

He died at 68, Cambridge Street, Pimlico.

His death was registered in the St George, Hanover Square district.

He was buried on August 25th, 1874 in Brompton Cemetery (plot number 76449). According to the burial records he had a “Private Grave” the plot of which had coordinates of 113.3 x 18.3 relative to the NE corner of the cemetery. Also “no extra depth” was required meaning his depth was 5ft whereas some are at 17 foot down with others above.