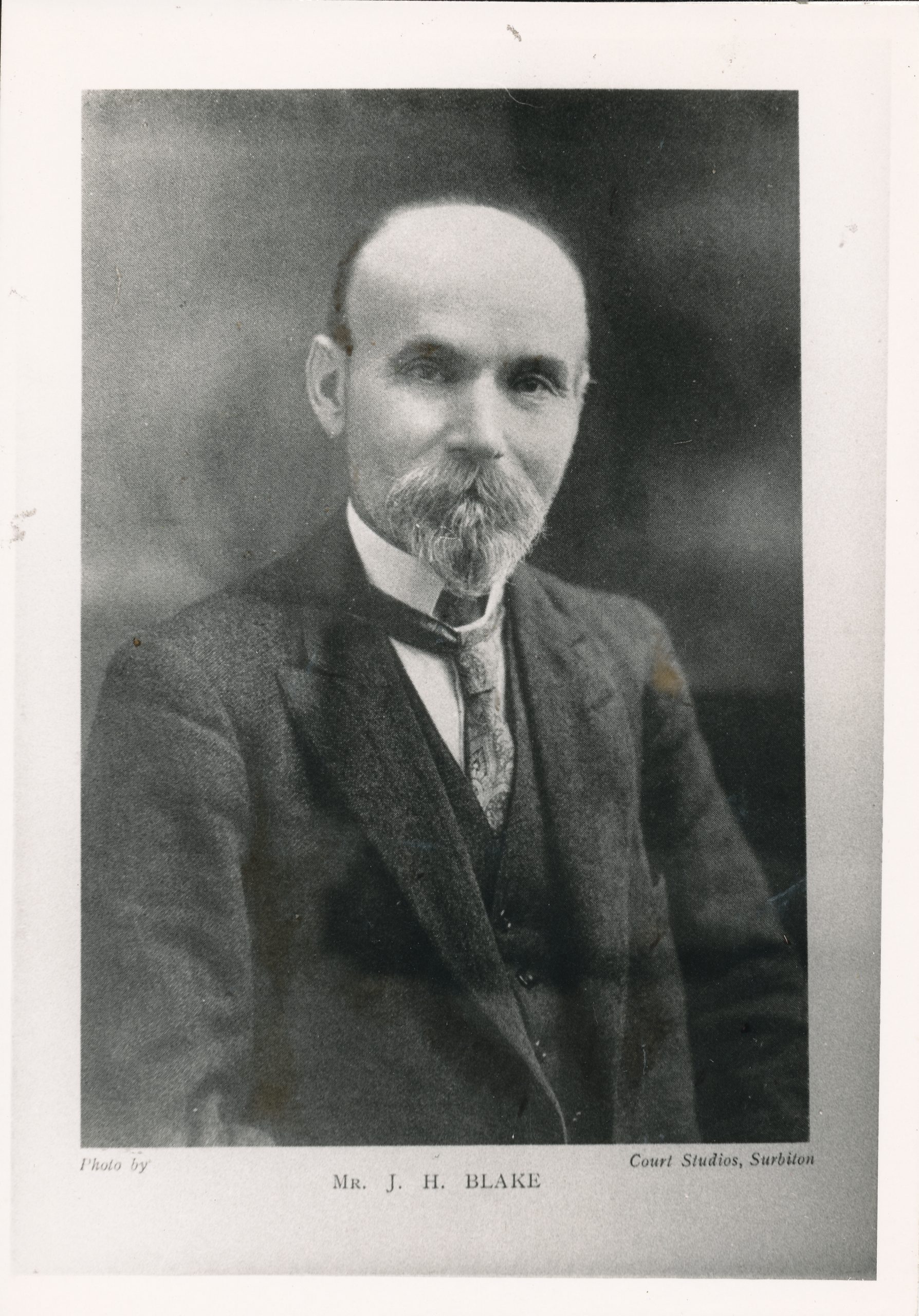 We remember English player Joseph Blake who passed away on Tuesday, December 11th, 1951.

According to the 1861 census Joseph was two years old and living with his parents and Frank in Rotten Row, Yeovil, Somerset.

In 1881 the family has upped sticks again and moved to 2 St. Lawrence Road, Saint Mary, Eastleigh, Hampshire. This address is also given as the South West Telegraph Office. Eliza was now the head of the household and a widower. Apart from Eliza E aged 11 everyone worked for the railway.

In 1891 Joseph had become Head of the Household (aged 32) and they had acquired a servant (Anna M Cornell) and a blacksmith (Francis Cornell) from Braintree in Essex.

In 1900 Joseph married Alice New in Cheltenham, Gloucestershire. They lived at 24, Barton Road, Eastleigh, Hampshire. Tragically, Alice passed away in 1903.

By 1911 Joseph was 52 and had retained his career as a Railway Clerk. He lived at 33, Broomfield Road, Tolworth, Surrey :

He is recorded as the head of a household of one and a widower.

In 1939 Joseph was living at 10 Springfield Court, Springfield Road, Kingston Upon Thames, Surrey. He was now retired.

No doubt there would have been other addresses not captured by the census records.

According to The Encyclopedia of Chess, (Batsford, 1977), Harry Golombek OBE :

“A leading British player in the 1890s and for many years editor of the Games Section of the British Chess Magazine between the two world wars. Blake’s best tournament performance came at the age sixty-three when, at Weston-super-Mare in 1922, he came 1st ahead of Maróczy, Kostić, Sir George Thomas and Yates.

The remarkable feature about Blake’s chess career is that he retained his skill and his comprehension of the game for a much longer period that most chess players. This extended from 1887 when he was 1st at the Counties Chess Association tournament at Stamford ahead of Bird and Pollock, a performance he was to repeat in 1891 at Oxford, to 1909 when he tied with H. E. Atkins for first place in the British Championship, to 1923 when he won the Weston-super-Mare tournament, right into the 1930s when he was principal annotator for the British Chess Magazine.”

“One of the leading British players at the end of the last century and the beginning of the present century. Born on 3rd February 1859. Represented England in the Anglo-American cable matches in 1902 and 1909. His best results were 1st in the Counties’ Chess Association Tournament 1887, ahead of Bird and MacDonnell; =1st with HE Atkins in the 1909 British Championship, but lost the play-off for the title; 1st at Weston-super-Mare 1922 ahead of Maroczy, Kostich, Sir George Thomas and Yates, and winner of the brilliancy prize for his game against Sir George Thomas; 2nd in the international correspondence chess tournament organised by Le Monde Illustre in 1895.

According to Tim Harding in the excellent Correspondence Chess in Britain and Ireland, 1824-1987 :

Railway clerk Joseph Henry Blake, the leading English correspondence player of the 1890s; also a strong OTB amateur player. He was a regular contributor to British Chess Magazine from the 1880s to the late 1930s.

In British Chess Magazine, Volume XXXIX (39, 1919), Number 3 (March) we have the following from Julius du Mont : “I presume it relates more particularly to chess professionals in this country, at any rate, it does not seem to me that the jews hold rank amongst first-class amateurs in proportion to their numbers.

In London there are very few if any of the class of RC Griffith, GA Thomas, JH Blake, HG Cole, EG Sergeant, and many others to say nothing of the younger recruits , W.Winter and RHV Scott.”

From the 1949 British Chess Magazine (written by RN Coles) we have this :

After an absence of ten years I looked in recently on the Kingston and Thames Valley Chess Club. There were many new faces and a number of familiar ones, among the latter one of rosy countenance, trim beard and twinkling eyes, none other than JH Blake, more vigorous than ever and attaining his 90th birthday on the 3rd February.

Twenty years ago in this same club I (RN Coles) was learning the game, now middle age approaches. Blake was an elderly man in those days, who had retired from all competitive play because of the strain it imposed; now, so far from showing the weight of years, he is back in competitive chess again.  He won the club championship last year and is in a fair way to repeating his victory this year. Of all the ‘Grand Old Men’ of chess, few have still been champions in their 90th year.

Older readers of the BCM will remember him as their Games Editor for many years, but few memories will cover the whole series of his successes beginning with a 1st at Stamford in 1887. Even 1922 must seem a distant year to the generation of today. That was the year that Maroczy and Kostic were invited to Weston-super-Mare to meet such rising young English masters as FD Yates and Sir George Thomas. And the first prize amongst those talented players was won by JH Blake, who had been born just when Morphy returned to England after his Paris Victory over Anderssen !

All readers of the BCM and all players everywhere will wish Britain’s oldest master continued health and increasing vigour, and those who knew him today will be surprised if he does not continue his attack for another decade at least.

Besides winning the first prize at Weston Blake also won the brilliancy prize with the following game : (#10,229)

For more on this game and its often mis-reported continuation see this article from Edward Winter.

He took 2nd in an international correspondence tournament organised by Le Monde Illustré in 1895, shared 1st in the 1909 British Championship in Scarborough but lost to Atkins the play-off, and shared 1st at London 1911. He was British correspondence champion in 1922.

He is the author of Chess endings for beginners (London 1900).