An event every year that begins at 12:00 am on day 24 of September, repeating indefinitely 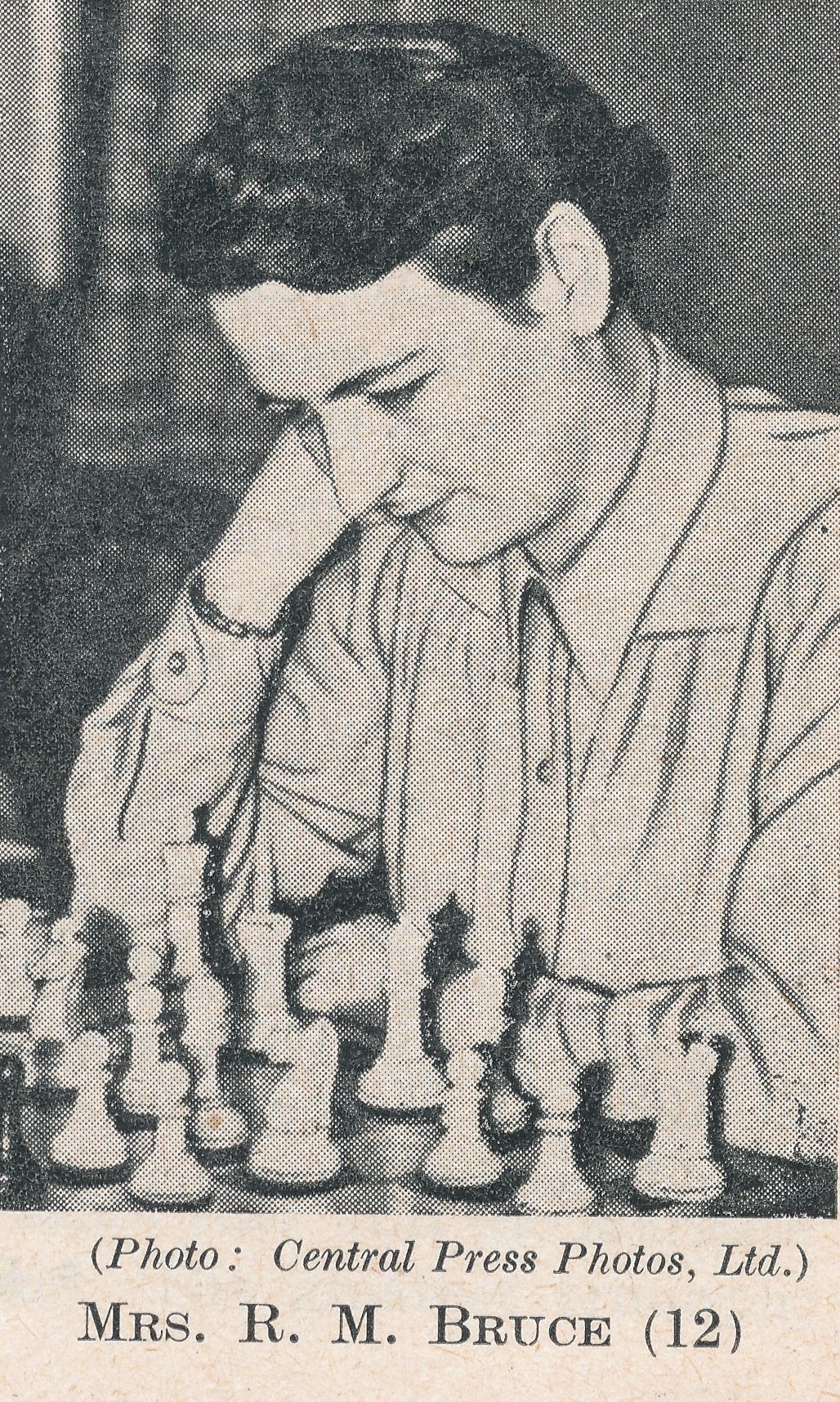 We remember WIM Rowena Bruce who died this day (September 24th) in 1999.

Rowena Mary Dew was born on Thursday, May 15th, 1919 in Plymouth, Devon. Her father was Clement Warner Harvey Dew and her mother was Mary Jane Rowe.

She married Ronald Mackay Bruce in July 1940 when she was 21 years old.

“Mrs RM Bruce was born in Plymouth in 1919, and learned chess at the age of twelve. She won the Girls’s World Championship in 1935 and the British Ladies Championship in 1937. During the war she served with the WVS in Plymouth. Apart from chess, she is interested in music and plays the cello.

She is married to RM Bruce, who is a well-known Plymouth player.”

In 1984 both Rowena and Ron received the BCF President’s Award for Services to Chess.

I started receiving chess tuition from the Plymouth Match Captain, Ronald Bruce in 1934. (Married him in 1940!).

Other tournaments abroad included zonals in Italy, Yugoslavia and Germany, and Olympiads in Germany, Poland and Bulgaria.

This last-named ended in disaster because I collapsed with a stroke during my second game. Obviously my chess playing was affected, but I was indeed fortunate to make a fairly good recovery.

I returned to competitive chess playing a year later but, in the meantime, several young players have surged forwards, and that British Ladies’ Championship seems to have become much more difficult to win !

But I now have three grandchildren!

BCN is grateful to WCM Dinah Norman for sending us these memories :

“Rowena Mary Bruce (need Dew) was born on 15 May 1919 and died in Plymouth in 1999. Rowena was the youngest of 3 children born to Harvey and Mary Dew. Mary Dew was a member of the Plymouth Chess Club and tried unsuccessfully to get her 2 sons interested in the game but Rowena was the only child who was interested.

When Rowena was 10 her mother organised private lessons for her with the Plymouth Champion, Ron Bruce. At the age of 21 Rowena married Ron Bruce and it was a very successful and happy marriage. They had an adopted daughter Rona who had no interest in Chess. Rowena had to wait until she was 21 before she could marry Ron. Rowena lived in Plymouth all her life.

Rowena and Ron married in July 1940. Ron and Rowena cemented a formidable playing and organising partnership which benefited chess in Devon for almost half a century.

After the War Rowena was one of the leading quartet of British Lady players which included Elaine Pritchard (née Saunders), Anne Sunnucks and Eileen Tranmer. In 1951 Rowena played in the Ladies Zonal in Venice and qualified for the Candidates in Moscow to be played the following year.

AT the age of 53 she qualified for the East European Zonal in Sofia, Bulgaria in 1972. Sadly in Round 2 of that event she collapsed at the board with a major cerebral haemorrhage which left her right side paralysed. By sheer force of will after many months of convalescence she taught herself to speak and walk again. She had to give up playing her cello which was awful for her.

The steely determination with which she followed her 75 year chess career and her recovery from serious illness belied her gentle nature. She was a modest, kind and gracious person who always thought the best of others.

I shared the title with her in 1967 and 1969 after 2 play offs. She was a very pleasant and sporting opponent.”

“International Woman Chess Master and winner of the British Ladies Championship on 10 occasions.

She was taught to pay chess by her mother, who was the Devon Lady Champion, after a mastoid operation when she was 10. In 1931 she joined Plymouth Chess Club, where she met R. M. Bruce, the Devonshire Chess Captain, who coached her and was largely responsible for later success. She married him in 1940.

Mrs Bruce has represented Great Britain in matches against the USSR and the Netherlands and the British Chess Federation in qualifying tournaments for the Women’s World Championship. In Venice in 1951 she came 2nd in the Western European Qualifying Tournament for the Women’s World Championship and thereby qualified for the Candidates tournament in 1952, when she came 12th out of 16.

Apart from chess, her hobbies are music, gardening and bridge.

She is principal ‘cellist in the Plymouth Orchestral Society.”

“Rowena Bruce died peacefully at home on 23 September following a long illness. Rowena Mary Dew was born in Plymouth on 15 May 1919, and she was taught the game at the age of 10, while she was convalescing from surgery, by here mother Mary Dew, herself a very able player who had been Devon Ladies’ Champion.

Rowena joined the Plymouth Chess Club, where she met her future husband, Ron Bruce, himself a strong player. She won the World Girls’ Championship in 1935 and the British Women’s title two years later. Rowena married Ron in 1940 and won the British title under her married name ten more times (seven outright and three jointly) between 1950 and 1969.

She represented Great Britain in matches against the USSR and the Netherlands. She qualified for the Women’s World Championship by coming 2nd in the Western European Zonal in Venice, and in the subsequent Candidates tournament in Moscow in 1952 she came 12th out of 16. She was awarded the women’s international master title in 1951.

The contribution to chess that Rowena and Ron Bruce made to national, west country and Devon chess was well recognised at the highest level, and when the British Chess Federation instituted a new award in 1983, the President’s Award for Services to Chess, they won it jointly in only its second year. Ron died in 1991.

Rowena was a past president of the Devon County Chess Association and the West of England Chess Union and continued playing for Devon until about four years ago when her increasing frailty made it impossible for her to travel to away matches.

Her other accomplishments included music : she was a principal cellist in the Plymouth Orchestral Society. She also partnered husband Ron in strictly non-competitive bridge for many years. She leaves a daughter Rona and three grand-children.”

From The Encyclopedia of Chess (Batsfords, 1977) by Harry Golombek :

Her best international result was a 2nd in the 1951 Western European Zonal tournament, qualifying for the Women’s Candidates tournament in Moscow 1952, where she came 12th/16. She has represented England in a number of team events, has excellent combinative powers, but lacks steadiness in strategy.”

Here is an interesting article from Tartajubow on Chess