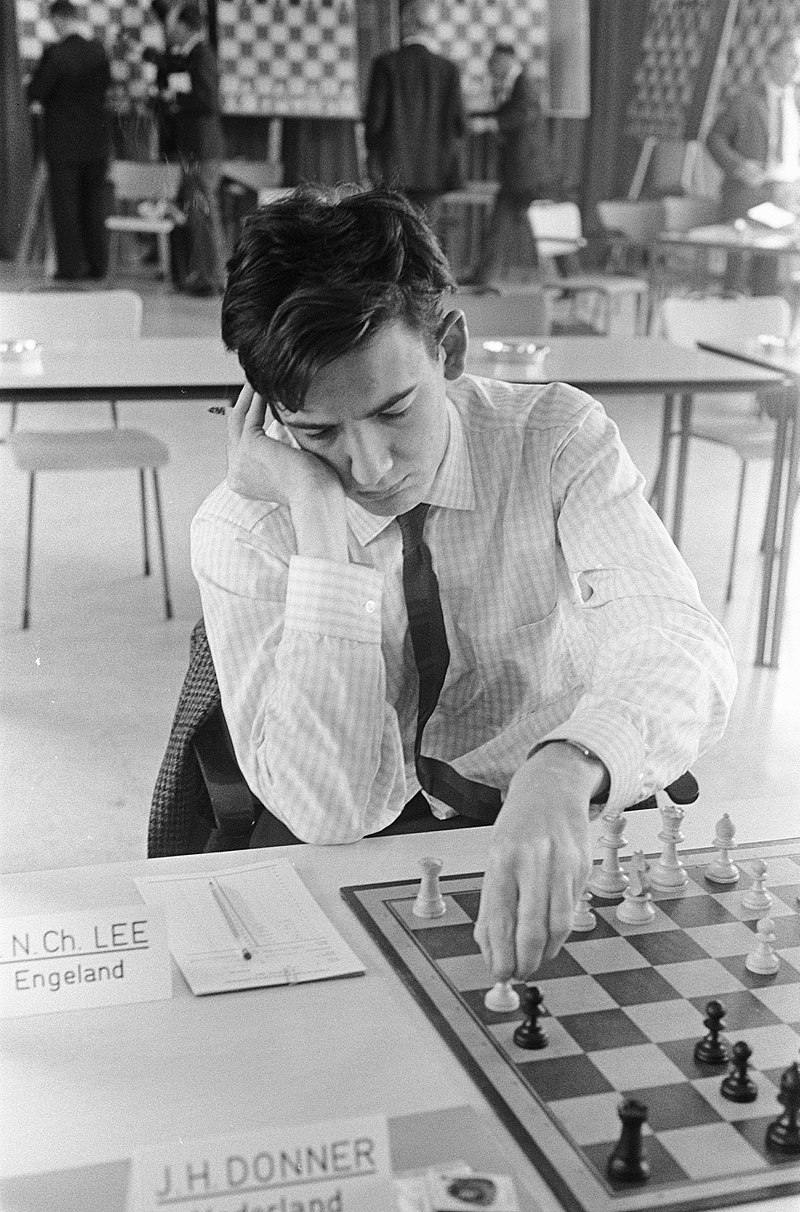 We wish Peter Lee all the best on his birthday.

Peter Nicholas Charles Lee was born on Sunday, November 21st in 1943 in Lambeth, London. His mother’s maiden name was Paganucci.

In 1963 Peter represented Oxford in the 81st Varsity Match played at the University of London Union in Malet Street on Korchnoi’s birthday (March 23rd). Peter had black on board 5 and drew with Frederick Michael Akeroyd in a King’s Gambit Declined.

Peter moved to top board in 1964 and had white against the son of BH Wood, FM Christopher Baruch Wood and won. The match was drawn.

During this period Peter found time to win the British Championship at Hastings in 1965. Peter Clarke reported in the October 1965 British Chess Magazine:

“Seventy years on from the great international tournament of 1895, which sowed the seeds of the Christmas congresses. the fifty-second in the British Chess Federation’s annual series-and this too began at Hastings, 1904 – saw victory and the national title go to the youngest player ever. Peter N. Lee, of London, a twenty-one-year-old Oxford University graduate in mathematics, made light of playing in the Championship for the first time and led from start to finish. Jonathan Penrose and Norman Littlewood vied with him all the way but in the last round had to be content with draws sharing second place 1/2 point behind with 8. ”

Peter’s final Varsity appearance as British Champion in 1966 saw another drawn match but Peter’s best Varsity result when he beat Bill Hartston with the white pieces in a King’s Indian Attack.

In world cup year Peter was selected by the BCF to represent England at the Havana Olympiad on board two below Peter Clarke in Group 4 and then Final B scoring a creditable +4=7-1.

Lugano 1968 saw Peter playing as first reserve and scoring an excellent +7=4-2 (Penrose on top board scored a wonderful 83.3% for the silver medal.

Peter played in the British Championships again in 1967, 1968, 1971 and finally in 1972 withdrawing after five rounds following a loss to David Pritchard. This is Peter’s last recorded game in Megabase2020.

With the white pieces Peter was a committed 1.e4 fan playing 8.c3 in the Lopez and open sicilians.

As the second player he played the Sicilian Najdorf and the Dragon along with the King’s Indian.

According to Wikipedia : “Later, he turned to contract bridge, at which he has also been highly successful. He has won the English Bridge Union’s National Pairs title four times, the first time in 2003, and has also been a member of the team that won the Gold Cup, the premier teams event in Britain, in 2003 and 2011. This makes him the only person who has won British championships in both chess and bridge.”

Until 1979 he worked as a statistician to the Tobacco Research Council, in Harrogate and then in London. From 1979 to 1984 he was an independent consultant in statistics and advisor in epidemiology and toxicology to a number of tobacco, pharmaceutical and chemical companies.

He formed P N Lee Statistics and Computing Ltdin 1984 to widen these activities. Peter is a Chartered Statistician who has published over 200 papers, letters and articles, and several books.
Peter is currently a director of PNLSC based in Palmers Green, London, N13.

As a consultant in medical statistics and epidemiology, he has also published over 200 papers, many on the effects of tobacco on health.[2]

According to Paul Littlewood currently Peter “plays Bridge for Surrey and chess for the Athenaeum in London”.