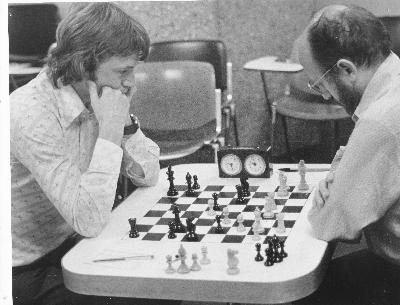 The Spasski-Fischer match of 1972 re-kindled his lapsed interest and he won with a 100% score the London Amateur Championship.

He joined (and was a staunch member of) London Central YMCA (CentYMCA) chess club and he wrote a privately published history of the club entitled The CentYMCA Story. This is now a much sought after publication. His membership continued during the 1970s until around 1979.

In 1974 Jimmy embarked on a highly successful career as writer and journalist. He authored a number of acclaimed books for Batsfords, The Chess Player, Caissa Books and latterly, New in Chess. His books on Chigorin, Zukertort and Breyer being some of the finest chess biographies published.

In 1979 Jimmy joined Metropolitan Chess Club to play in the London League. He played top board and scored very highly with many significant scalps.

He was registered with Metropolitan and Barbican Chess Clubs. He joined Barbican, as did many ex-CentYMCA players, following the hiatus over their Tottenham Court Road venue loss.

In December 2009 Jimmy visited the London Chess Classic and was photographed with VIP guess Viktor Korchnoi :

Jimmy was Editor of CHESS / CHESS Monthly magazine from 1981 until 2010 although his name remained on the masthead until February 2012.

In January 2016 Jimmy (together with Josip Asik) became co-editors of British Chess Magazine taking over from James Pratt and John Upham. Jimmy then took on a role at the newly created American Chess Magazine and then worked for Pavillion Books on their newly acquired Batsford Book imprint.

Here is an interview with Jon Manley from Kingpin Magazine