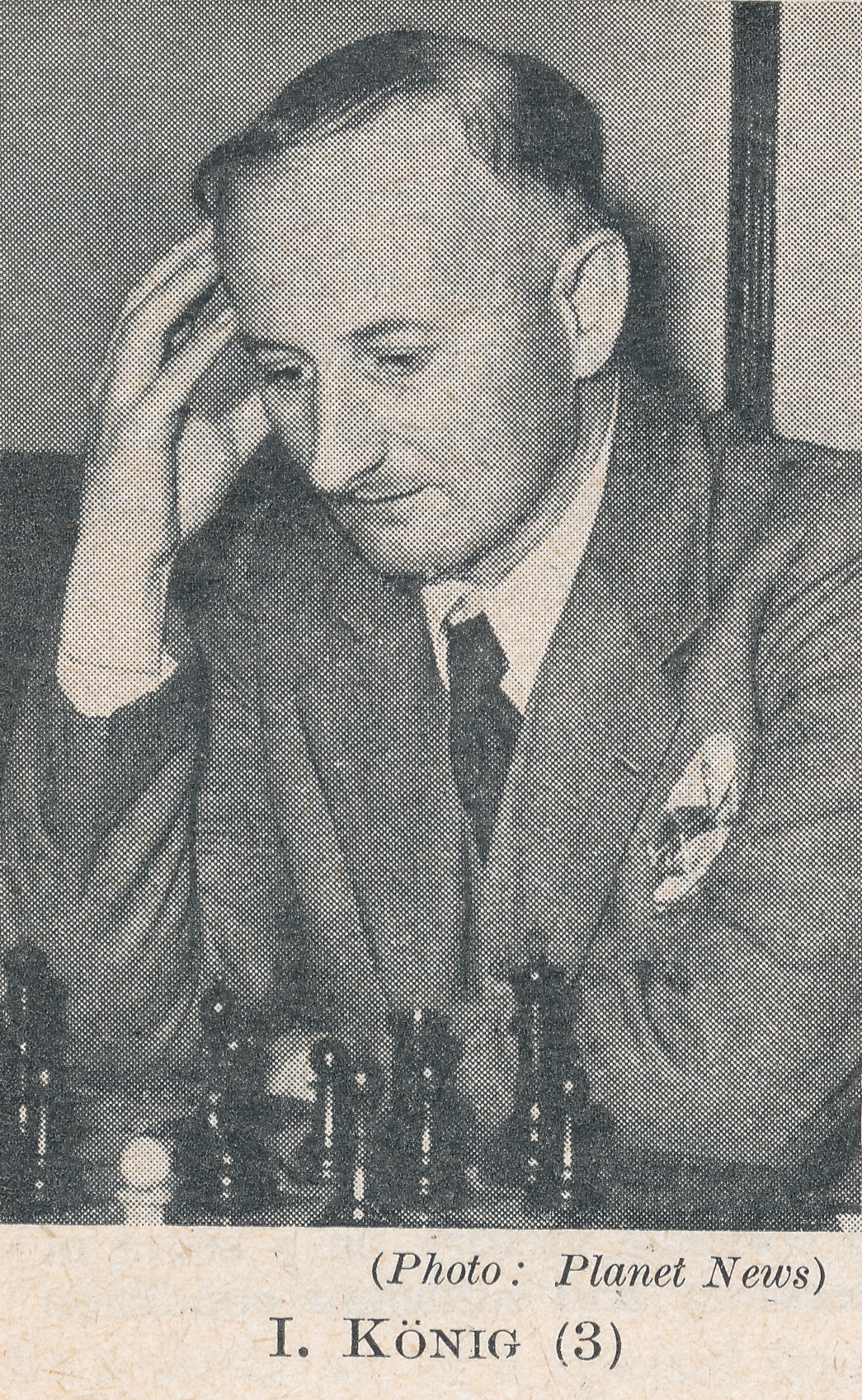 From The Anglo-Soviet Radio Chess Match by E.Klein and W.Winter :

“Born in 1901 in Hungary when it still belonged to the old pre-World War I Austria, spent most of his life in Vienna, where he became a promising player at an early age. After World War I and the various geographical adjustments in the map of Europe, he became Yugoslav by nationality and represented that country three times in international team tournaments.

He has competed in a great number of international tournaments, some of them in this country, where he has lived since 1938. He won the Premier Reserves at Hastings, 1938, in a strong international field, finished fourth and fifth with the late Landau at Bournemouth, 1939, and shared first and second prizes with Milner-Barry in the National Chess Centre tournament, 1939. His last performance was in the London International Tournament, 1946, where he shared fourth, fifth and sixth places with Sir George Thomas and Gerald Abrahams. He is now a professional player.

König’s special strength lies in the openings, of which he has a deep knowledge.”

“International Master (1951). Born in Kula, Hungary (now Serbia). König became a Yugoslav citizen when the territory in which he lived was ceded to Yugoslavia after the First World War. In 1938 he emigrated to England and became a naturalised British subject in 1949. He found that the English climate affected his health and in 1953 went to live in the USA.

König learnt to play chess when he was 10. In 1920, while studying at Vienna University, he met Spielmann, Tartakover and Réti, and became became interested in the hypermodern school of chess, which they represented.

He played for Yugoslavia in the chess Olympiads of 1931 and 1935 and came 2nd in the Yugoslav national tournament of 1922. His results in international tournaments include =4th at Bournemouth 1939; =4th at London 1946 and 2nd at Hastings 1948-49. These results do not do justice to his strength as a player. He was handicapped by a poor temperament for tournament chess, which prevented him from achieving greater success in the international field.

A chess professional, König was a first-class teacher of the game (Anne was a student of his), as well as being a leading theoretician. He is author of The Queen’s Indian Defence (Pitman, 1947) and Chess from Morphy to Botvinnik (Bell, 1951).”

“An international master since 1951, born at Gyula in Austro-Hungary. After the first world war König became a Yugoslav citizen and represented that country in the Olympiads of 1931 and 1935. He emigrated to England in 1938 and was naturalised in 1949. Since 1953 he has resided in the USA. Tournament results include 2nd prize at Hastings 1948/9. His publications include a monograph on the Queen’s Indian Defence, London 1947, and a longer work, Chess from Morphy to Botvinnik, London, 1951 ”

Hooper & Whyld are silent on König for some strange reason.

He was born in Gyula, Hungary, and also lived in Austria, England and the USA during the troubled times between the two world wars.

“In 1938, Imre König emigrated to England. In 1939, he tied for 4-5th in Bournemouth (Max Euwe won), and shared 1st with Philip Stuart Milner-Barry in Hampstead. In 1946, he took 4th in London. In 1948/49, he took 2nd, behind Nicolas Rossolimo, in the Hastings International Chess Congress.

In 1949, he became a naturalized British citizen. However, in 1953 he moved to the United States.

König was awarded the International Master title in 1951.”