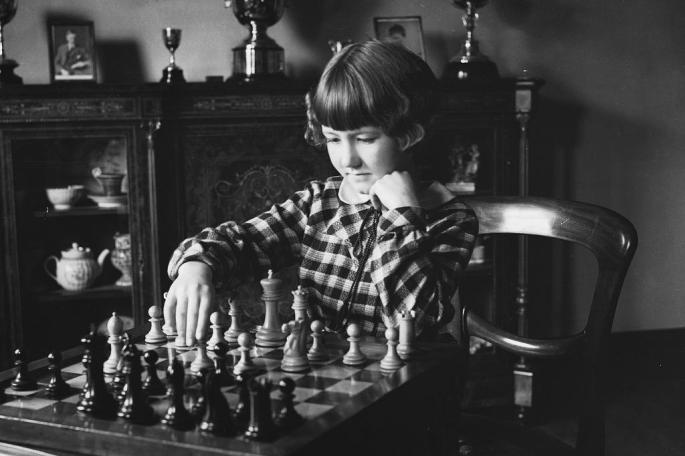 We remember Elaine Pritchard who passed away on Saturday, January 7th, 2012.

In the 1939 register Henry is listed as a Garage proprietor who had “retired through incapacitation”. He is recorded as a Air Raid Precautions Warden who was also a first aider. His wife is listed as undertaking “unpaid domestic duties”. The record for Elaine is blanked out with “This Record Officially Closed” meaning that they believe that she might still be alive. They are listed as residing at The George & Dragon Hotel in High Wycombe, Buckinghamshire.

She was taught chess by her father and then her early trainer was Charles Dealtry Locock who lived with the family in the hotel above.

She married David Pritchard on Friday March 7th 1952 in the Chelsea Registry Office. Elaine was living at Wylderne, Bridge Street, Great Kimble, Aylesbury HP17 9TW. At the time of their marriage David was a Flight Lieutenant.

Elaine and David had a daughter, Wanda H Zelia Pritchard on March 21st 1958. She became Wanda Dakin who was also a chess player. Wanda attended Guildford High School for Girls and then Royal Holloway College, Egham.

“Chesswise I seem already to have lived an alarmingly long time, the era of Capablanca and Alekhine back across the war years was another world. The three games I have chosen belong to three distinctly different periods in these fifty years – the juvenile long-ago, the most elderly present and the middle when I was playing tolerably well and was awarded the WIM title.

My father, assisted by a 2d. (= almost 1p) book of rules from Smiths, taught me the moves at somewhere round the age of five. We were rescued by the problemist CD Locock who noticed me playing in a girls’ tournament two years later. It was he who brought me up on a diet of the Scotch, the Evans and any gambit that was going. We analysed them in some depth – for those days – and my severe task-master made me copy out long columns of dubious lines. He also made me his guinea-pig for his Imagination in Chess and it is small wonder that I still find it hard to resist a sacrifice, and much of my undoing comes from premature sorties such as f4 and Qh5.

In retrospect he must have been a brilliant teacher. Starting in 1936 a succession of girls’ titles came my way including the FIDE under-21, and in 1939 the British Ladies at the age of 13. It is hard to assess how strong or weak one was at the time because there has been such a marked improvement in the standard of play among women over recent years. At all events, those pre-war years were happy ones, especially away from chess which took second place to horses and more physical pastimes.

The incident which received the most publicity was the ‘affair Alekhine’. Most of the pre-war giants were kindly if a little condescending towards me but the new World Champion – he had just regained the title from Euwe – showed me no mercy. He took on 30 Kent players at the Charing Cross Hotel and after 5 hours demolished all except myself. The ending was equal. He stood over our board and glowered. ‘Give the child a draw’, said someone in Russian in the audience, which despite them mid-night hour were everywhere on chairs and even under tables. ‘I know what I am doing’ came the reply, and of course he did. I lost.

At 13 the world changed. I almost gave up chess. There were no celebrations after that Ladies Championship. The foreign masters packed their bags for home; we packed them for exile in Buckinghamshire and filling sandbags.

My saddest personal loss of the war was Vera Menchik, perhaps the strongest lady player of all time.

Leaving university with a poor, but lightning degree in French, I was employed by the Foreign Office and spent the next few years in London. While at college I had won the Notts County Championship and like to remember my last game on top board for county against the great HE Atkins, so many times British Champion, making his final appearance for Leicestershire.

I forsook women’s events and achieved probably my best results, finishing equal 3rd in the London Championship final, having beaten David Hooper with an Allgaier Gambit, and qualifying for the British Championship at Buxton in a section which included L. Barden, V. Berger and DB Pritchard.

Marrying David in 1952, we went to the Far East for three years and on our return I made a come-back to women’s chess and won the title at Blackpool in 1956. I was consequently despatched to the Western Zonal in Venice and finished equal 2nd with Lazaravic. This qualified me for the Interzonal, but my daughter Wanda arrived (March 21st 1958) before I could get to the starting post. Meanwhile with Eileen Tranmer we represented the BCF in the first women’s Olympiad in Emmen in 1957 where we finished 7th. The Finals went well for me and included a draw against Rubtsova, the then world champion. The results of the two tournaments were sufficient for me to be awarded the IWM title. My BCF grading at that time was 200 and has gone down ever since!

And so some 20 years on and still a teacher, we reach the final period, that of comparative dotage. Notwithstanding, I have been fortunate enough to have played in the last four Olympiads at Skopje, Medellin, Haifa and Buenos Aires, twice as captain of the team. It was, of course, pleasurable to win a silver medal at Haifa, despite the fact that the East European bloc was missing. The last of the three games comes from Haifa at a crucial stage. Playing for a team has always seemed more fun.

Also in my dotage belong two books, Chess for Pleasure

and The Young Chess Player (Faber) and organisation of girl’s chess, particularly the Faber Cup”

Elaine Pritchard was, as a child, one of the few girl prodigies in the history of the game. She was taught the moves by her father when she was 5.5 and started to play in tournaments at the age of 7. When she was 10 years old, she won an under-21 girls’ tournament sponsored by FIDE and at the age of 13 won the British Ladies Championship for the first time.

She is married to David Pritchard, ex-Southern Counties Champion and Malayan Champion in 1955, when she was stationed with the RAF in Singapore, who tells of how when he first met her, when she was about 7, she was unable to reach the far side of the board.

Her successes in more recent years include 2nd in the Western European Women’s Zonal Tournament of 1957 and 6th in the same event at Arenys de Mar in 1966; 3rd at Havering 1967 and 3rd at Paignton 1967. She played for the British Chess Federation team in the First Women’s Chess Olympiad at Emmen in 1957.”

From The Encyclopaedia of Chess, Edited by Harry Golombek :

“International Woman master and British Woman champion 1939, 1946, 1956 and 1965, she was a girl prodigy with perhaps the most natural talent for the game of any British-born woman. She was playing competitive chess at the age of seven and was only ten when she won the FIDE Girls Open chess championship (under-21) in London in 1936, winning eleven out of twelve games played.

British Girl Champion (under-18) 1936-8 she won the British Women’s Championship in 1939 at the age of thirteen. Winning the title on three more occasions she hardly ever had a bad result in the event but, by profession a teacher, she did not always have the time to devote to the game.

Elaine did not merit mention by Hooper & Whyld it would appear.

The following obituary by James Pratt appeared in the February 2012 issue of British Chess Magazine :

“Via Godalming Chess Club we learn of the death of International Woman Master, Elaine Pritchard (née Dorée Elaine Zelia Saunders ) (7 i 1926 Brentford – 7 i 2012 Gloucester). British Lady Champion in 1939, 1946, 1956 and 1965, she became an IWM in 1957. A child prodigy, she won the World Girls Under 21s at the age of ten and first captured the British Ladies title at the outbreak of WWII. Mrs Pritchard wrote two books, Chess for Pleasure and The Young Chess Player. She was an occasional BCM contributor. Her last published grade was in 2003. She was an Honorary Life Member of the ECF.”

and here courtesy of Edward Winter is an excellent article on chess prodigies including many scanned photographs of Elaine.

and here is her Wikipedia entry

and some more photographs.

and finally a discussion of Elaine on the English Chess Forum.