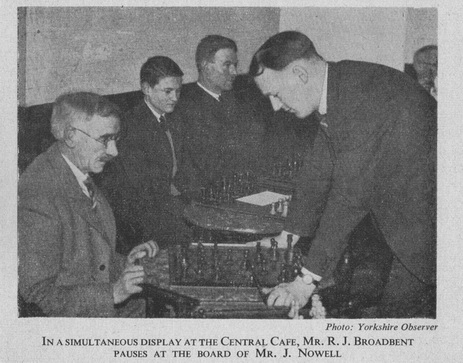 We remember Reginald Broadbent who passed away on October 29th 1988.

Reginald Joseph Broadbent was born on Friday, August 3rd 1906 (the year of the San Francisco earthquake) in Durban, South Africa. His father was Joseph Edward Broadbent (born 1879) who married Alice Cook on January 4th, 1930 in Durban.

According to the 1911 Isle of Man Census (FindMyPast, Richard James; thanks!) the Broadbent family (sans father) stayed at a guest house in Onchan on the night of February 2nd 1911. Reg (aged 4) was a boarder together with mother Alice (33), brother Roland (1) and sister Laura (4). Since Reg and Laura are both recorded as 4 years old it is reasonable to suppose that they were born as twins. We think that Reg had an additional sibling who had passed away and that the name is not recorded. Reassuringly Steve Mann agrees with this conclusion.

He married Catherine H Broadbent (born 19th September 1895) and were recorded as living (in 1939) in “Cheadle and Gately”, Cheshire. His profession was as a “Telephone Traffic Superintendent, Class II, Post Office Telephones” which was a a civil service occupation. Catherine carried out “unpaid domestic duties”.

According to Steve Mann in his excellent Yorkshire Chess web site :

“Reginald J. Broadbent, British Champion 1948 and 1950 died on October 29 at the age of 82. He was a member of Manchester and Bradford Chess Clubs in his day, and was famous for his remarkable record in Anglo-Dutch matches.

After he moved to London around 1950 he was less free to play due to his senior post with the Post Office. A fuller notice will appear next month.”

“Reginald Broadbent (3 viii 1906-29x 1988) was born at Durban and was British Champion in 1948 and 1950. In the latter content he actually won his last six games in a row to reach a score of 8.5 points, ahead of Klein, Penrose and Milner-Barry. He was often spoken of as “playing himself into form” in the first half of a contest as his work as a civil servant (the GPO) did not allow him the chance to practise regularly against strong opposition.

He was a member of the Manchester and Bradford clubs before the war when he built up a fine record in Anglo-Dutch matches and Northern Counties champion on many occasions.

Brian Reilly recalls that Broadbent was selected for the BCF Olympiad side in 1954, but was forced to turn down the invitation due to the exacting nature of his work in London, and thereafter his main connection with the game was a chess column in a West of England newspaper. He was a subscriber to BCM right up to his death.”

With the white pieces Broadbent was a die-hard 1.e4 player who allowed the Marshall Attack against the Ruy Lopez.

As the second player RJB defended the Nimzo-Indian Defence and played Open games.

Here is one of his best games :

(The Yearbook editor was Brian Concannon and it would appear standard practise, at the time, not to credit or attribute sources for obituaries.)

A detailed biography may be found here