This is the first of what will be many posts considering the history of chess clubs in Richmond, Twickenham and surrounding areas.

If you’re good, I’ll tell you another story as well.

The first chess club in Richmond dates back to the year 1853.

In fact the meeting eventually took place at Richmond Town Hall, which would, about 120 years later, host a different Richmond Chess Club. Howard Staunton and Johann Jacob Löwenthal were present, and Staunton delivered, at some length, an address pointing out ‘the advantages arising from the cultivation of an elegant and thoughtful recreation like chess’. 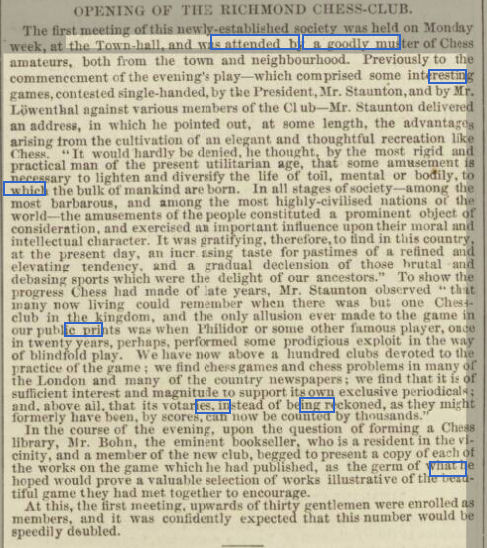 The club seemed to be going well: in November Staunton advised T.R.D. of Twickenham that the game he played at Richmond Chess Club would have attention. If you have any idea of the identity of T.R.D., please get in touch.

In January 1854, Staunton replied to ‘Gustavus’, of Eton: ‘You should join the Richmond Chess-club, which is rapidly increasing in members, and is likely, in a year or two, to be one of the most influential chess societies out of London. The secretary is Mr. Harris, chemist and druggist, of Richmond, and from him you must procure the information required.’ In March, always eager to oblige, he advised ‘Query’ to ‘join the Chess-club at Richmond, which is immediately in your neighbourhood, and rapidly rising into note’. In May, he instructed ‘Albert’ of Surbiton to ‘join the Richmond Chess club and you can then have the practice you require’. In September he informed ‘Wolsey’ of Hampton Court that ‘the Richmond Chess-club meets at Etherington’s-rooms every Monday and Friday evening’. F.R.S., of Twickenham, was given the same information in November.

The Etheringtons were a prominent musical family in Richmond and Twickenham for much of the 19th century, and in the latter half occupied various premises in Hill Street.

Things then went quiet for a year, until, in November 1855, when Staunton told J.T.W., of Kingston that there was a very good chess club in Richmond, and that he should apply to Mr Harris.

In 1856, Löwenthal, in The Era, joined in. In March he told F.C., of Kew: ‘You should join the Richmond Chess Club, the Hon. Sec., W. Harris Esq., will provide you with the requisite information.’

On 18 May, he published a letter from Mr Harris. 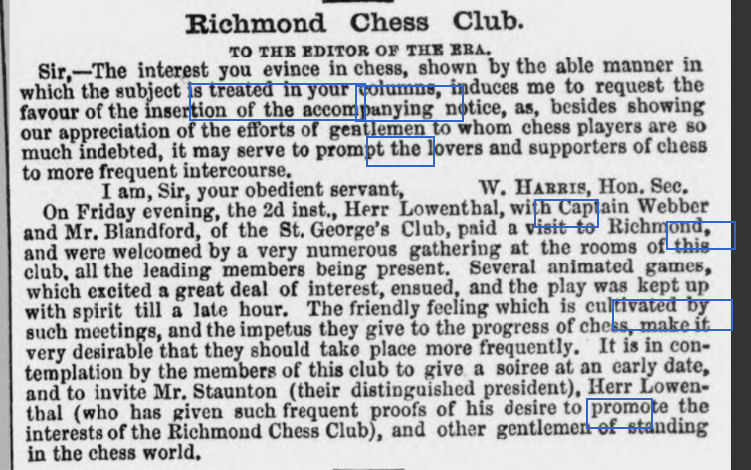 After that, we hear no more. It looks like the club folded very soon afterwards.

To speculate on what happened, we need to find out more about W Harris.

We can pick him up in the 1851 census where we find William Harris and his family at 2 Hill Street, Richmond. This seems to have been on the corner of Red Lion Street, where Waterstone’s will now sell you some chess books.

William was born in about 1813 in Shelton, Bedfordshire, and, in 1841, married Ann Walker in Wollaston, Northamptonshire, a few miles south of Wellingborough. Ann had been born in Little Harrowden, the other side of Wellingborough, in 1816. (Paradoxically, Little Harrowden is much larger than its neighbour Great Harrowden.) Ann’s parents had died when she was young and she was adopted by family members in Wollaston.

In 1851 their children were Eliza Sophia, Anne Agnes, Louisa Amelia, William Alfred Philidor and baby Helen Hectorina. Only a real chess addict would name his son Philidor! Another son, Arthur Edward was born in 1853, but by 1857, when their youngest daughter, Emmeline Julia, was born, they’d moved. They were no longer in Richmond, but back in Wollaston, the village where they had married. And Will had changed his job: he was no longer a chemist and druggist, but a farmer.

What was the reason for the move? Perhaps his business had failed. Perhaps the farm was an inheritance. Perhaps they needed to return to Ann’s family. Who knows.

Anyway, it seems that, when they moved, in late 1856 or early 1857, the first Richmond Chess Club folded. Staunton’s prediction that it would become one of the most influential chess societies out of London, didn’t come to pass. It’s the same old story, isn’t it? A club is only as good as its organisers, and, when the club secretary departs there’s no one there to keep it going. It would be a long time before there was another chess club in Richmond.

There’s much of interest here. It’s good to know that Löwenthal played with several ladies, finding that two of them had ‘great aptitude for the game’.

It’s also good to know that Mr Harris ‘has often engaged with players like Brian (sic: presumably Brien was intended), Fonblanque, Medley and Löwenthal, and produced some fine games’ and that ‘were opportunity afforded him for practice with antagonists of superior force he would certainly rise to eminence among the amateurs of country clubs.

It sounds, then, that William Harris was a pretty good player, but that opportunity was never offered him. He continued farming for the rest of his life, dying in Wollaston in 1881. But back in the 1850s he was clearly a significant figure in the chess world. I haven’t been able to find any games or results, though. If you have any information, do let me know.

What happened to his children? His two sons followed in his footsteps, both becoming farmers. Of his daughters, Sophia seems to have died young, but no death record has been found, Helen died in infancy, and Emmeline at the age of 12. Anne and Louisa both married and emigrated to North America.

I decided to look into some of his Northamptonshire friends. The Reverend Alexander William Griesbach, Curate of Wollaston, is particularly interesting. (Note that ‘curate’ was a much more significant title within the church then than it is today: Alex was a parish priest rather than an assistant.) He was born in Windsor, but his family, of German ancestry, were from Bath where they were good friends of the very important Herschel family. William, when he wasn’t busy discovering Uranus, was a composer whose music is still sometimes played today, and his sister Caroline, a pioneer female scientist, was also a significant astronomer. If you’re not familiar with their story, do check it out.

I also decided to look up B Dulley Esq. It turns out he was Benjamin Dulley, a doctor and general practitioner. We can pick him up in the 1851 census, aged 44, living with his wife Fanny and two daughters, Mary Elizabeth and Helen. He employs two house servants, Sarah Saddington and Elizabeth Earle, and a groom, George Stock. The rather unusual toponymic surname Saddington was very familiar to me, as was Sarah’s birthplace, Great Bowden, Leicestershire.

I promised you another story if you were good, and here it is.

Georgie Porgie pudding and pie
Kissed the girls and made them cry.

Sarah lived a long life, dying a spinster in her late 80s. She spent most of her life, apart from a short time in service to Ben Dulley (was he perhaps known as Dull Benny?) in her home village of Great Bowden, very close to Market Harborough, and not far from the village of Saddington from where she gained her surname. She had a niece named Elizabeth Saddington.

The Leicester Chronicle 25 October 1862 reported: “George Smith, of Great Bowden, charged with neglecting to pay 19s. 6d., that amount being due towards the support of the illegitimate child of Elizabeth Saddington for thirteen weeks, was ordered to pay the same and 3s. 6d. costs.”

That child was Fanny Smith Saddington, who had been born in 1855. Elizabeth would sadly die of chlorosis, a form of anaemia, the following year. At the time he kissed Liz and made her cry George was a widower, his wife, Alice Lois Flint, having died in 1853. They had had two daughters, Eliza, who died at the age of 6, and Sophia, who later emigrated to America. But Fanny wasn’t Georgie’s only illegitimate child. He had previously had a relationship with a slightly older girl named Eliza Carter. They had had two children, Elizabeth Smith Carter (1841) and Henry Smith Carter (1842). Quite a lad was our Georgie, by the sound of it. Henry died in infancy, but Elizabeth had a very long life and a very large family. How do I know all this? Elizabeth Smith Carter was my great grandmother. Perhaps I’ll tell you more another time.

There you have it. If Georgie Smith hadn’t kissed Eliza Carter I wouldn’t be here to tell the story of how his future squeeze Elizabeth’s Aunt Sarah had worked for a friend of the secretary of the first Richmond Chess Club.