From the publisher’s blurb:

“As late as 1950, many chess clubs in America excluded women. The Marshall Chess Club in New York City was an exception, organizing the U.S. Women’s Chess Championship beginning in the late 1930s. Since the 1980s, the average rating of the players has increased. The Saint Louis Chess Club has organized the championship since 2009, with record-setting prizes. Drawing on archives and original interviews with the living U.S. Women’s Chess Champions, this book examines their careers with biographies, photos, and 171 annotated games, most of which are from the 60 championships between 1937 and 2020.” 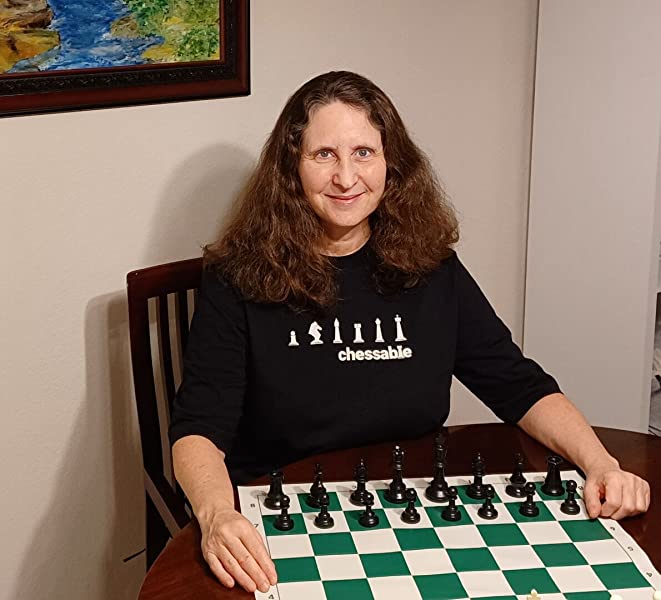 “Alexey W. Root, Ph.D., is a lecturer at the University of Texas at Dallas and a former United States Women’s Chess Champion. This is her eighth book.”

For many years chess was traditionally seen as a game for white males, and, in these days where representation is considered so important, there is much that needs to be written about other aspects of the game.

In particular, it’s important that the history of women’s chess is written, that stories are told, that games are published. So it’s a particular pleasure to welcome this new book by former US Women’s Champion Alexey Root, featuring every champion from 1937 to 2020.

We have 29 chapters in total, one for each champion, with winners of multiple titles granted more space. Some of the recent winners will be well known to many readers, but many of the earlier champions will have names only remembered by those who enjoy digging around in chess archives.

In each chapter you’ll learn about their lives both within and outside chess as well as seeing some of their games, all with light annotations. Each chapter also includes a photograph of its protagonist. The book has been thoroughly researched, and all living champions were asked to assist: advising on games and, on occasion, providing scoresheets and photographs.

The first champion was Adele Rivero Belcher, a new name to me, who also won in 1940, but the first few decades were dominated by two names, Gisela Kahn Gresser, who won nine titles between 1944 and 1969, and Mona May Karff, who won seven titles between 1938 and 1974. Other strong players who took part in that period included Mary Bain, winner in 1951, and Sonja Graf, Vera Menchik’s rival back in the 1930s, who took the title in 1964.

By today’s standards they weren’t amazingly strong players (Gresser was just below 2200 and Karff just below 2100 at their best in the 1950s), but as pioneers who achieved success in a male dominated field they deserve our respect and remembrance.

Here’s a game between Gresser and Karff. Click on any move for a pop-up window.

1959 champion Lisa Lane briefly caused a sensation in the chess world, appearing on the cover of Sports Illustrated in 1961.

If you’ll excuse a digression into the history of Richmond & Twickenham Chess Club, I had a particular interest in this brief encounter.

Lane’s opponent, Henry Herbst (at least I presume it’s the same one) was a member of my club for several years in the middle to late 1970s, often playing on the adjacent board to me. From what I can piece together, he was born in Germany, moved to Canada, then to the USA, where he played this game, before moving to England and then back to Germany, where I believe he died a few years ago.

I was editing the club magazine at the time and Herbst submitted his game against Bobby Fischer for publication. When I checked it out in my book of Fischer’s collected games it was played by somebody with a different name, but with a similar rating and, as far as one can tell from two short games, a similar style of play.

Assuming he wouldn’t otherwise have claimed to have played a rather indifferent game, why was my friend Henry Herbst using two names? Both names appeared occasionally in other US tournaments at the time these games were played. I have my suspicions based on something I was told in confidence many years ago, but I couldn’t possibly repeat it here.

To return to the book, perhaps the leading figure in US Women’s chess between the mid 1970s and the mid 1980s was Diane Savereide, who took the title five times between 1975 and 1984.

She nominated this, against the author of this book (Rudolph was her maiden name) as her best game from the 1981 championship.

The overall standard of play gradually improved as the 20th century reached its end, but it wasn’t until the 1990s, with an influx of players from the former Soviet Union, that players with higher ratings started to compete on a regular basis.

This game won the brilliancy prize in 1997.

The dominant competitor in recent years has been Irina Krush, who took the title for the first time in 1998 and has won on seven further occasions between 2007 and 2020, leaving her only one behind Gisela Gresser: an impressive feat considering the strength of her opposition in recent years.

This game is from the 2015 championship.

Woven into the biographies and games are occasional stories of sexism and abuse, and, although they sometimes make uncomfortable reading, it’s entirely fitting that we can read them here. This is an issue the chess world has to deal with in order to make the game more attractive and inclusive.

I have a few minor gripes about the production. There are inconsistences, particularly in the presentation of the crosstables at the back of the book, which have been produced in the format in which they appeared in print. Perhaps it’s just a personal thing, but inconsistency really annoys me. I’d prefer them to be standardised in the same format. I also found the covers too flimsy, and, a point I’ve made before with softback books from this publisher, the presentation of the games, with very few diagrams, rather unattractive. I like to be able to follow games from the book without resorting to a board and pieces. I appreciate that the solutions I’d have preferred would not have been economically viable.

Nevertheless, this is a well-researched and thoughtfully compiled book which fills an important gap in the market. We need more books about women’s chess.