“The Dragon Sicilian is the perfect choice for club players searching for chaotic and imbalanced positions. This opening manual shows how Black can turn up the heat against 1.e4, and enjoy dynamic winning chances game after game. Top-10 player Anish Giri is the best tutor to bring this complicated opening across to ‘everyday’ club players. Anish serves up his super-GM lines and clearly explains the ideas and strategies behind the moves. So when game time comes, you know exactly which moves to play, at what moment, and how to deliver the knockout blow. Make no mistake: This repertoire’s take-no-prisoners-strategy means you will sometimes reach razor-sharp positions, where both sides must play ‘only moves’. But that’s why you’ll love having Anish Giri as your opening coach. Giri delivers just the right mix of cutting-edge analysis and practical guidance for players of all levels with his trademark witty and down-to-earth teaching style. The Dragon Sicilian also covers all other major systems Black could face, including what to play against Anti-Sicilians such as the Rossolimo, the 2.c3 Alapin, and the Grand-Prix Attack.”

“Anish Giri became a chess Grandmaster at the age of 14 years, 7 months and 2 days. At the time, in 2009, that meant he was the youngest grandmaster in the World. Starting from the January 2013 list, the Dutch grandmaster was the leading junior player in the FIDE World Rankings. In June 2014 he turned twenty, which ended his junior years. Giri is a top-GM with a 2700-plus ELO rating.”

I am impressed with this colourful book, which is an accessible, lucid introduction to the Sicilian Dragon. The repertoire guide is a well- produced hardback book with an attractive vibrant front cover, good quality paper and many large diagrams, typically two per page and sometimes three making the work pleasant to browse and study.

The back cover blurb on the volume states that the opening manual work is aimed as an introduction for everyday club players, and it succeeds admirably in this respect. This title does not purport to be a major theoretical treatise or a “latest developments” style of publication, however, there is some cutting-edge theory and new ideas, some of which are new to the reviewer, who is a life-long Dragon addict.

The reviewer is not going to do a detailed theoretical critique the lines chosen by Giri for several reasons: time;  my knowledge of some of the lines recommended is not sufficiently well-developed yet and thirdly these surveys can often come down to a thicket of engine analysis which can be off putting for less experienced players and does not always enhance understanding: it is important to understand the typical ideas, so when your opponent deviates from the book main lines/engine main lines, you can work out a solution at the board.

Despite my comments above, it is important for any reader of an opening tome, to not blindly follow the lines and take everything as gospel: check with an engine and use other sources.

The book has a short, didactic introduction to the Sicilian Dragon introducing the ideas, and nineteen chapters.

The book is effectively divided into four sections:

The first chapter gives a useful overview of the Yugoslav Attack main line 9.Bc4 variation. 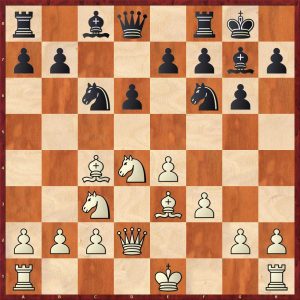 This introductory part briefly surveys the other main systems, other than the recommended repertoire, that occur such as the Chinese Dragon, Soltis Variation, Modern Variation, Topalov Variation. This is a useful pointer for the reader to the myriad of Dragon systems.

This part covers the book’s suggestion against 9.Bc4 which is the rare system 9…Nxd4.

This system was popular in the late 1950s/early 1960s but fell into disuse after some high-profile white victories, such as Fischer-Larsen Portoroz 1958 and Tal-Portisch European Team Championship 1961.

The idea of the line is to reduce white’s attacking potential by exchanging some pieces. I can see the logic of recommending this line as it is a straightforward system which is not popular, so many white players won’t know how to meet it: white must be accurate to even get a small advantage. The disadvantage is that it could be regarded as passive as black defends a slightly inferior, but defensive ending in the main line.

Black’s move order in this variation is critical as Giri points out: black has just played 12…b5!

Giri offers a new twist on this ancient line with an intriguing positional pawn sacrifice in a main line, which has been played successfully in a correspondence game. Buy the book to find out.

This chapter covers the sidelines in the main line after 9.0-0-0 d5 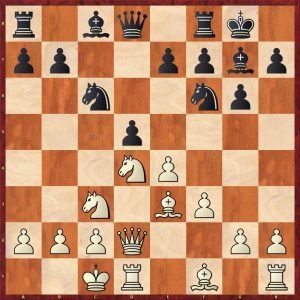 White has a fair number of alternatives to the main line of 10.exd5 which are:

The last two are definitely the most important with Giri covering these with main-line recommendations which are well known and fine for black.

Black has sacrificed the exchange for active play: Magnus Carlsen has played this way; a host of games has vindicated black’s approach including Short-Carlsen London 2009 which was drawn after a serious of adventures.

This chapter is divided into two sections covering the greedy pawn grab and what is probably the main line of the entire Dragon at top level.

The (in)famous pawn grab leads to this position:

This position has been well known since the 1950s, black now plays 13…Qc7! with equality. White has to be accurate to hold on: as a youngster, I won many quick games in this line with black. The author covers this line well with respected well-known variations for black.

Here Giri offers the old main line 12…e5 which has been under pressure in recent years. He offers an interesting, rare approach which if it holds up is very important for Dragon theory. Buy the book to find out.

The idea behind this line is to prevent 9…d5 whilst avoiding one of the main lines 9.Bc4. the author recommends the well-rehearsed response 9…Be6 which is fine for black.

The second section of the book, chapters 6 to 10 cover the following variations:

These lines are perfectly respectable but do not threaten to extinguish the Dragon’s breath. Giri covers these with well-known antidotes. For example, in the Levenfish Variation:

Black has just played 6…Nc6! which neutralises white’s main idea to get in e5 to disrupt black’s development.

The third section has a couple of short chapters on the Accelerated Dragon and the Drago(n)dorf.  These are really supplementary chapters which are interesting but do not detract from the main book.

The fourth section has seven chapters on the Anti-Sicilians and covers over half the book which is excellent. These systems are very popular at all levels particularly at club level with the obvious intention to avoid reams of theory: we have all got stuffed on the white side of the Sicilian facing an opponent bristling with theoretical barbs. This part is divided as follows:

I particularly like the chapter on the Moscow Variation, which introduced the reviewer to some new lines. As well as that, the author covers some excellent points about the importance of move order in the Maroczy system. 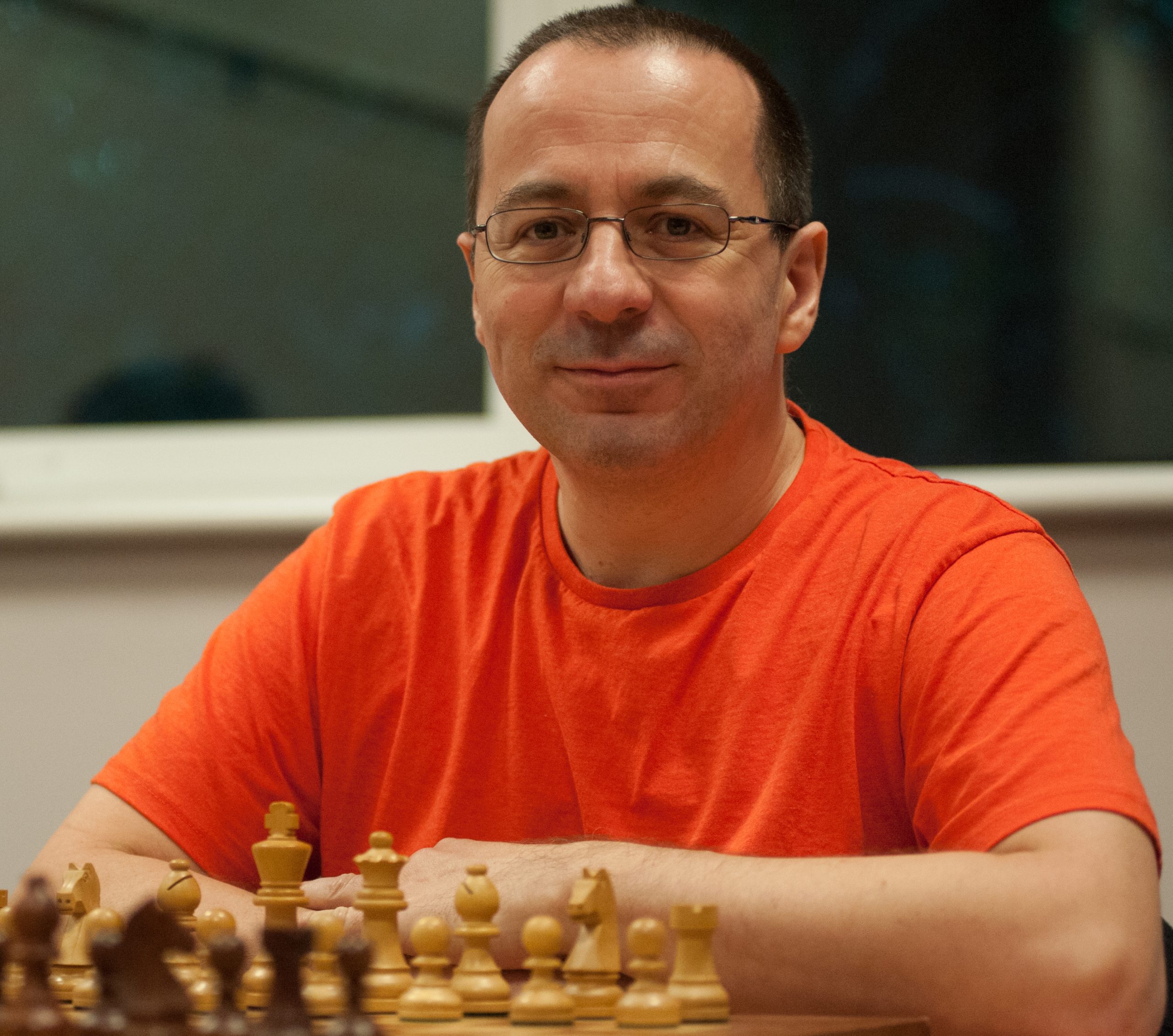