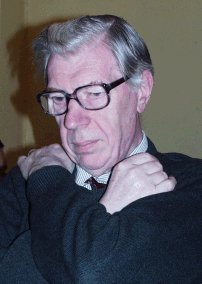 Michael played for a number of clubs in recent years, viz :

We are grateful to Leonard Barden for these words produced at short notice :

“Michael made his name as a young player first by his successes in the Saturday evening Gambit Guinea speed events at the Gambit chess cafe in Cannon Street which he often won ahead of master level rivals. He remained a strong speed player all his life.

Aaronson Masters at Harrow 1978, was his best individual success, sharing first place with IM Aldo Haik of France with (I think) an IM norm.

Michael was a regular British championship, Surrey, Hastings and London League player (forget club, Richmond? Clapham Common?) and was one of the first to play the London System (d4/Bf4) as as his regular opening with white.

When Surrey won the counties championship a few years back they took the trophy specially to Michael’s home in Norbury, such was their regard.

Michael’s work career was in the Patent Office and he retired when they introduced computers as he doesn’t like them and does not use the internet at all.”