Here’s a match from 1892 between Twickenham Chess Club and the National Liberal Club Chess Club (sounds a bit like Battersea Power Station Station, doesn’t it?).

There are some familiar names among Twickenham’s successful players, but you’ll also see that their strongest player Mr G E Wainwright, an amateur champion of the British Chess Association, was absent.

A name we haven’t seen in other matches, but a very significant one. Players like Ryan, Britten and Fox were strong club players (round about 2000-2200 by today’s standards, I guess, but George Edward Wainwright was a genuine master standard player.

Here he is, from a few years later. Very few photographs seem to have survived.

George Edward Wainwright was born in Redcar, a seaside resort in North Yorkshire, on 2 November 1861.  His father, David, was originally a chemist but later became an independent minister of religion. David sadly died before young George reached his first birthday, and the family moved to Bradford, where his mother Annie (Ann Eliza Tetley) worked as a schoolteacher. At some point before the 1891 census they moved north to the spa town of Ilkley, whose Moor is famous in song. (Ilkley is also famous for its splendid new chess centre, one of whose instigators is Andrew Wainwright. I have no idea at present whether or not he’s related.)

George was a pupil at Bradford Grammar School, where, I’d assume, he learnt chess. In June 1880 he represented his school in a match against the Old Boys. He won an exhibition to University College Oxford later that year, and, the following year was awarded a Classical Scholarship involving five years of study.

He was the Treasurer, and later President, of the chess club there and played five times in Varsity matches: on board 6 in 1881 and on board 2 in the subsequent four years. It looks like he improved very rapidly in his first year at Oxford. In March 1882, the University team played a series of matches in which he scored 8½/9, including two wins on top board against the Rev Charles Ranken in a match against former Oxford students.

This game comes from the 1883 Varsity Match. The analysis of all games in this article was produced using Stockfish 14 in ChessBase. Click on any move to display a pop-up board.

After Oxford, it was time for George to find a job – and a wife. On 7 September 1886 he married Alice Margaret Pictor, from the village of Box, in Wiltshire, six miles or so from the city of Bath. The young couple settled in Chiswick, where their first two children, George Edward junior (1887) and Philip Francis (1889) were born.

Here, from shortly before his marriage, is a game from a club match.

George had obtained a clerical job in the Civil Service, working for the Local Government Board, which supervised public health, poor relief and local government, and was also responsible for the registration of births, marriages and deaths. There’s a suggestion in an obituary that he was working on Births, Marriages and Deaths at Somerset House for at least part of his career. I’d assume that some LGB employees would have been based within local government throughout the country, and, if we follow his movements, this might have been the case with George Edward Wainwright.

At some point round about 1890 the family moved to Teddington, and it’s there we find them in the 1891 census. They’re living in a house called St Ronan’s in Kingston Road. This seems to have been next door to the Catholic church close to the junction with Fairfax Road and opposite Normansfield Hospital. (The wonderful theatre is often used as a venue for operas and concerts, and the Museum of Learning Difficulties, well worth a visit, features an information board about Reginald Saunderson.)

As you’d expect, George junior and Philip are there, along with George’s mother Ann, a retired schoolmistress, a 21-year-old cousin named Nelly Fenton and two young servants, Annie Beauchamp and Emily Riley. Although he’s just described as a clerk, he’d already, because of his academic qualifications, be pretty high up and doing well for himself. Alice, of course, was also at home, heavily pregnant with the couple’s only daughter, who would be born that May and given the names Constance Margaret. A third son, David, would be born in 1894.

If George walked back up Kingston Road towards Teddington, he’d soon have what would later become Bushy Park Road on his left (an OS map from a few years later shows it under construction), where, some 40 years later, the Misses Ada and Louisa Padbury would sell ham and beef. A turning on the right a bit further up named Cornelius Road was not at that point built up, but in the 1900s would acquire houses and a new name in honour of the reigning monarch: King Edward’s Grove. It was there that, in the 1920s, one of his future opponents, Edward Guthlac Sergeant, would briefly make his home, and also where the Misses Padbury would move after retiring from their Ham and Beef Stores. Their great nephew would spend the first two years of his life there as well,  but that’s another story for another time and place.

George had been very active in chess circles through the later 1880s, most notably winning the British Amateur Championship in 1889. On moving to Teddington, he would have wasted no time joining Twickenham Chess Club. But with a growing family, and, you would imagine, increasing responsibility at work, he played less often during the 1890s, contenting himself with club and county matches.

On 7 April 1894, for example, he was on Board 19 in a 108-board match between the South and North of England, where he drew his game against our old friend (and possibly my distant relation by marriage) Edwin Marriott. 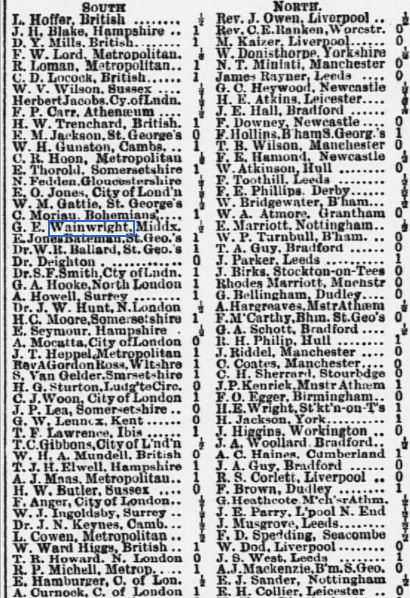 Lots of great names there on both sides, some of whom will be featured later in this series, but Wainwright’s position on board 19 suggests that he wasn’t regarded as any more than a strong amateur at that point. He was still, in 1894, representing Middlesex, but he was soon to move, and to leave Twickenham Chess Club.

By 1895 he was living in Guildford, joining the local club and now representing Surrey in county chess.

This game from a county match demonstrates that George was a player with an enterprising style and considerable tactical ability.

The administrative headquarters of Surrey County Council moved from Newington (Southwark) to the newly built County Hall in Kingston in 1893: perhaps he was involved in some way. It’s also possible his job might have then taken him to Guildford, which would explain the move. Perhaps, though, he was commuting to the capital from nearby London Road station, which had opened in 1885. A train would have taken him directly to Waterloo, from where Somerset House was a short walk across the bridge.

With his family now growing he seems to have had more time for chess, and in 1898, as a result of games like the one below, he had come to the attention of the national selectors, being picked as a reserve for the Great Britain team in their third annual cable match against the United States of America.

The following year, he was in the team facing a promising young tactician named Frank Marshall.

A long and exciting game ensued, in which our man was perhaps fortunate to escape into a fortress-like draw.

It seems that, by now in his late 30s, George Edward Wainwright was approaching the peak of his powers over the chessboard.

The 1901 census located the family in the parish of Stoke next Guildford. George, described as a Principal for the Local Government Board, and Alice were at home, along with their three youngest children, George’s mother, a governess to help look after the youngsters, a cook and a housemaid. George junior, meanwhile, was boarding at Pilgrim House School, Westerham, Kent.

We’ll leave him there for the time being, a senior civil servant working for the Local Government Board, a family man, and an English international chess player renowned for his dashing attacks.

The story of George Edward Wainwright’s life and chess career will be continued in the next Minor Piece.

If you want more, and, if you enjoy attacking chess or British chess history you certainly should, historian Gerard Killoran, who lives in Wainwright’s home town, Ilkley, is currently working on a biography. I can’t wait to read it.