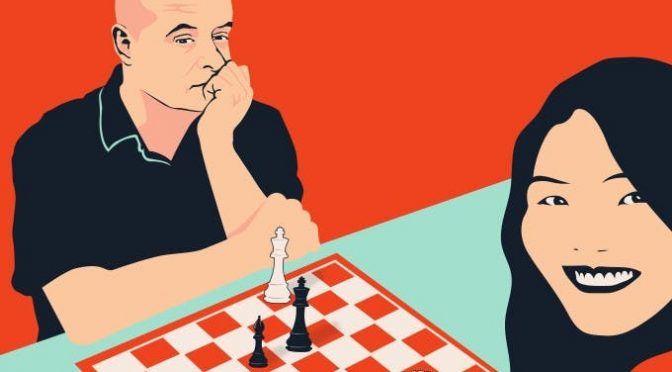 Keith Arkell is an English grandmaster active on the national and international scene for more than forty years and very much still going strong.

Arkell’s Odyssey was published in 2012 by Keverel Chess Books; hugely popular and in high demand on abebooks, Amazon, eBay and other reselling platforms.

From the rear cover of Endings we have the following publishers blurb :

“With chess booming online and time controls becoming ever faster, mastery of the endgame has never been so important. A few positions can be memorised; most rely on feel. How would you go about converting an extra pawn in a rook endgame and would you have any idea how to even try to win bishop and knight against knight and pawn? In Arkell’s Endings, acclaimed endgame expert Keith Arkell guides you through some of his finest games – and grinds. Making good use of clear explanation, not a wealth of variations, he should convince even the most ardent of opening theoreticians and attacking experts that endgames can be enjoyable, as well as beautiful on occasion.

Not only will readers enhance their intuition in the final stages of the game, they will never again write off an endgame as dull or a draw. Along the way, the reader will also learn plenty about the Minority Attack and Arkell’s Scale of Pawns, which may mean you will no longer look favourably on trading an e-pawn for a d-pawn. As becomes clear in Simon Williams’ Afterword, there is so much more to Keith Arkell’s chess prowess than just his endgame mastery. Throughout, his creativity and sheer resourcefulness shine through, with the Ginger GM demonstrating that one should never allow Arkell to advance his g-pawn as Black, or even to attack.

Grandmaster Keith Arkell has been one of Britain’s most prolific players since turning professional in 1980. His rivalry on the weekend circuit with fellow GM Mark Hebden is the stuff of legend, but he has also thrived on the bigger stage. He has finished first as many as 25 times at the Paignton International Congress and in 2008 tied for first in the British Championship at Liverpool’s iconic St George’s Hall. 2014 was another highly successful year, as Arkell became the European Over-50 Champion, following that up with the silver medal at the World Senior Championships.”

Keith has developed a reputation for working hard at the board and not being afraid to grind out a position maybe with a small edge or even no edge at all and just keep on plugging away (Carlsen style). His long time choice of the Smyslov Variation of the Caro-Kann as Black is deal for this approach.

White to play and loose !

To demonstrate that this is a book of note there is a foreword by acknowledged endgame analyst and World Championship Candidate, GM Jonathan Speelman whose expertise on endings and the theory of corresponding squares is respected world-wide. Interestingly enough, JS also selects the Smyslov Caro-Kann as a weapon of choice.

Arkell’s Endings contains 33 games spanning the period from 1983 to the present day against a vast range of player strength and experience.

Keith introduces his games with a preamble / Introduction that sets out his rather unique playing philosophy. Keith describes his “Hierarchy of Pawns” which makes complete sense and yet is rarely (if at all) spelt out in training and coaching literature. Keith sets out his enthusiasm for the Carlsbad (pawn) structure which I learnt much about from Kevin Wicker in his golden nugget of a book, “How to play the Queen’s Gambit Exchange Variation“. This Introduction itself is more instructional than you might at first imagine.

Keith provides each game in full and rarely makes any comment on the opening except when its choice leads to particular kind of endgame structure. The middlegame comments indicate plans and ideas to reach a superior ending and the endgame comments are quite specific.

We are grateful to IM Richard Palliser (in charge of the book’s production) for permission to reproduce game 14 as an excerpt :

and there is a downloadable excerpt here

Settling down with this book is a real pleasure. It very much feels that Keith is in the room with you explaining his thought processes and giving you confidence in your decision making. Keith’s writing style is much like Keith in person : friendly and affable and not attempting to score any points.

The book concludes with an Afterword by Ginger GM Simon Williams.

The Afterword itself is of interest since Simon presents three tremendous games of Keith that are not endgame grinds but great tactical slugfests modestly including Williams – Arkell from Torquay, 1998.

The book concludes with a welcome Index of Opponents.

If you are wondering just how many of these games conclude with Keith’s signature Rook + Bishop versus Rook then you will have to buy the book to find out : I hope you will !

Best wishes to GM Simon Williams on his fortieth birthday, this day (November 30th) in 1979.

His Wikipedia entry is here