Apologies for the Minor Pieces delay, but I had a deadline on another project. It’s now time to return to George Edward Wainwright.

Here he is again. You might recall (it was a long time ago) that, in my previous article, we left him in 1901, an  English international player, previously a member of Twickenham Chess Club, but now living and playing chess in Guildford.

The chess world would change a lot over the next decade, beginning to look a lot more like the world we know today, with a mixture of club and county matches and tournaments. It was, in the spirit of the times, becoming more competitive. George Edward Wainwright was in his element.

At the end of May 1901 he was in Folkestone for the 3rd Kent County Chess Association Tournament, although his result there was rather indifferent. His opponents included Edward Guthlac Sergeant, Joseph Henry Blake and the endgame expert Creassey Edward Cecil Tattersall, the winner of his section. The other section was won by Henry Ernest Atkins, ahead of Lucien Serraillier, father of the novellist Ian Serriallier (The Silver Sword).

His short draw against Tattersall featured an opening that would become the height of fashion a century later. He mishandled it, but on move 15 his opponent missed the win. 119 years later, English IM Jack Rudd reached the same position and made no mistake. (Click on any move in any game in this article and a pop-up window will magically appear.)

In May 1902 Wainwright took part in the 4th Kent tournament, held in Tunbridge Wells: an all-play-all for 10 players won by the Dutch organist Rudolf Loman, ahead of the likes of Reginald Pryce Michell and (later Sir) George Alan Thomas. Perhaps his most interesting opponent here was the mountaineer Edward Douglas Fawcett.

Against Isle of Wight solicitor Francis Joyce he essayed the relatively new and unexplored Albin Counter-Gambit.

His score of 5½/9 gave him a share of 3rd prize, but he was slightly less successful in the Southern Counties Chess Union Tournament in Norwich, where 4½/11 left him well behind Michell, impressive with 10½/11.

We can see the chess administration we know now coming into shape in this period: county organisations affiliated to regional organisations, who were in turn affiliated to the British Chess Federation. It hasn’t changed very much in the last 120 years: some of us have been saying for years that we need a 21st century rather than a 19th century chess administration in this country.

The 1903 SCCU tournament necessitated a trip to Plymouth (the SCCU covered a much wider area than it does today) where he scored a big success. His score of 7/8 gave him first place ahead of George Edward Horton Bellingham, Wilfred Charles Palmer and Michell.

In October 1903 Wainwright resigned his post as President of Guildford Chess Club, as he had left the area. As we’ll see, he moved to Surbiton, just the other side of Kingston from his previous address in Teddington. Perhaps his job had taken him back from Guildford to Kingston, or perhaps he wanted to be nearer London for both work and chess purposes. Surbiton Station, on the main line into Waterloo, provided – and still provides – regular fast services into the capital. It looks very different now than it would have done in Wainwright’s time: the magnificent Art Deco building dates from 1937 and is considered one of the masterpieces of Scottish railway architect James Robb Scott.

He was soon in action against his former club, who were then, and, to the best of my knowledge, are still on friendly terms. Nearly 120 years later, they’re regular opponents in the Surrey Trophy.

Wainwright drew on top board against William Timbrell Pierce, a problemist and endgame study composer who also gives his name to a variation of the Vienna Gambit. Surbiton came out on top, even though retired architect Henry Jones Lanchester failed to turn up. He certainly wouldn’t have been looking after his baby granddaughter Elsa, who would later become a famous film star – and the wife of Charles Laughton: Henry disowned his daughter Edith (Elsa’s mother) and sent her to a lunatic asylum because of her relationship with a working class Irishman named Shamus.

One of the most important events in London chess for many years up to World War 2 was the City of London Championship, which regularly attracted many of the capital’s finest players. Games took place on weekday evenings, so, now living in Surbiton, he’d be able to get home quickly and easily. He took part for the first time in the 1903-04 season, finishing in midfield behind the largely forgotten William Ward, with Michell in second place.

1904 was a momentous year for British Chess: the first British Championship took place. It’s still, to this day, more or less recognisable. The venue chosen was Hastings: perhaps Wainwright was disappointed not to have been one of the 12 players selected for the championship itself, won by the Anglo-American master William Ewart Napier after a play-off with Atkins. There were three equal First Class sections, and he found himself in Section B, where he shared first place with Charles Hugh Sherrard. Other sections included the British Ladies Championship and sections for Second and Third Class players.

At Southport in 1905 he was promoted to the Championship itself where he scored a very respectable 6/11, finishing in 6th place.

Here’s his exciting victory over the tragic and short-lived Hector Shoosmith, the son of a Temperance Lecturer from Brighton.

In 1906 the British Championship took place in Shrewsbury. Atkins and Michell took the first two places, with Wainwright’s 7/11 giving him a share of third place with Francis Lee, Palmer and Shoosmith. The BCM remarked: The play of … Palmer, Shoosmith, and Wainwright has been specially marked by light and shade. Each lost games through blunders and weak moves, but they have all shared in providing some of the brightest and most interesting chess of the tournament. A comment which could, I suppose, sum up Wainwright’s chess career. His oldest son, George Jnr, took part in one of the Third Class sections but without distinction.

His game against the veteran Blackburne, by now a shadow of his former self, was marked by a finish which would have been worthy of his opponent.

As Autumn arrived it was time for the City of London Club Championship, and it was this tournament that provided George Edward Wainwright with perhaps his greatest success. He ran out a clear winner with 14/17, 2½ points ahead of the runner-up, Shoosmith, with many of London’s leading amateurs trailing in his wake. As well as holding the Gastineau Cup for a year, he received the princely sum of £10 and the championship medal.

The news even reached the chess players of Hartlepool, who were informed that he holds a very important official position, and that, according to a leading Chess Master, he is a sporting Chess player of the best type.

George Edward Wainwright had now, in his mid forties, reached the climax of his chess career. Rod Edwards, in his 1907 rating list, gives him a rating of 2407, placing him 71st in the world. Although 100 points or more behind Atkins and Burn, he was one of the strongest of a group of talented English amateurs rated between about 2300 and 2400, all of whom are of interest for both their lives and their games.

Wainwright didn’t have far to travel for the 1907 British Championship in London, where his 6½/11 was enough for a tie for second place with Blackburne, Michell and EG Sergeant behind Atkins. Another outstanding result: press reports remarked on his vivacious and enterprising style.

Here’s how he dispatched Blake.

In the 1907-08 City of London Championship he couldn’t quite repeat his success of the previous year, finishing a close third behind Thomas Francis Lawrence (you’ll certainly meet him in a future Minor Piece) and William Ward. He didn’t play in the 1908 British Championship, but continued to compete regularly in club and county matches for both Surrey (qualified by residence) and Yorkshire (qualified by birth). He had also returned to playing in the Anglo-American cable matches.

He didn’t play at the British Championships at Tunbridge Wells in 1908, but he was back again at Scarborough the following year, finishing in midfield 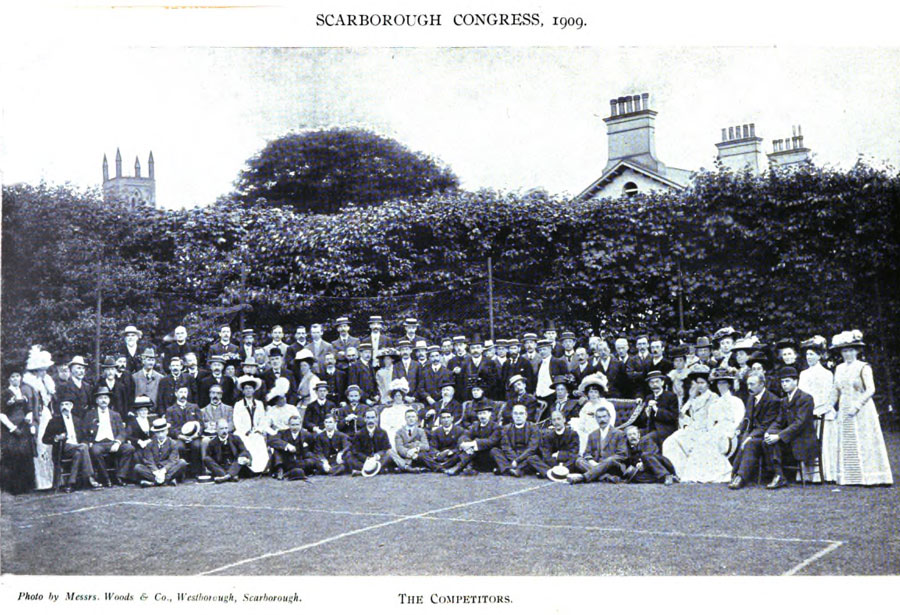 He will be somewhere in this rather splendid group photograph.

In this game he again demonstrated his attacking skills, sacrificing a knight to defeat Liverpool’s Harry Holmes, an aural and ophthalmic surgeon.

He had previously finished 3rd in the 1908-09 City of London Chess Club Championship, and, coincidentally, the 1909-10 event saw the same three players taking the first three places: Ward, Blake and Wainwright.

This game, against the problemist Percy Healey, was described by Frederick Winter Markwick, in the Essex Times, as one of the prettiest games I have had the pleasure of watching.

In March 1910 he represented the City of London Chess Club against a visiting team from the Dutch Chess Federation, drawing his game on board 3 against Abraham Speijer, The Dutch team fielded the brothers Arnold and Dirk van Foreest on boards 1 and 7. Arnold is the great great grandfather of GMs Jorden and Lucas van Foreest and their sister Machteld.

The 1910 British Championships took place in Oxford, where he again performed well, sharing 4th place on 6½/11, and beating both Blackburne and the up and coming Fred Dewhirst Yates, who tied for second place behind Atkins.

Here’s how Wainwright beat his fellow Yorkshireman.  I guess they were half way towards a comedy sketch!

Wainwright wasn’t quite so successful in the 1910-11 edition of the City of London Club Championship, but, now approaching his half century, a slight decline was only to be expected.

Meanwhile, on 2 April 1911 it was time for the census enumerator to call. Let’s see who was at home.

There he was, at 1 St Andrew’s Square, Surbiton, very convenient for the station and trains to London. Very nice it looks, too. George Edward Wainwright and his family seemed to be doing very well for themselves.

He’s described, rather modestly, as a Principal Clerk working for the Local Government Board. His wife is also at home, as are their two middle children. Philip is a business pupil for a photographic requisites supply company, while Constance has no occupation listed. They also have a visitor, 19-year-old Julie Ross from Glasgow, as well as a cook and a housemaid.

George Jnr was following in his father’s footsteps in more ways than one. He had moved to his father’s home town of Ilkley, where he was also working for the Local Government Board, as a district auditor. 16-year-old David, though, had chosen a different career path: he was a naval cadet undergoing officer training in Dartmouth.

Here, having followed George Edward Wainwright through his forties, the busiest decade of his chess career, is a good place to pause.

Come back soon for the third and final episode of the chess career of the man who, although not a member for long, was by far the strongest player in the first Twickenham Chess Club. Our friends at Surbiton can also claim him as one of their finest players.