In 1958 Jimmy at the age of 11 joined his local Islington Chess Club (at the time Islington & North London Chess Club) and soon afterwards became a London Junior Champion. Following this Jimmy played little chess and was working for John Lewis (echoes of CHO’D Alexander and Leonard Barden). Following John Lewis Jimmy worked as a Health and Safety Officer for Islington Council.

At this time Islington Chess Club was one of the strongest in England and included such members as Kenny Harman, Ron Harman, Danny Wright, Stewart Reuben and others. Its most famous member was probably IM Simon Webb

The Spassky-Fischer match of 1972 re-kindled his lapsed interest and he won with a 100% score the London Amateur Championship.

He joined and was a staunch member of London Central YMCA (CENTYMCA) chess club and he wrote a privately published history of the club entitled The CENTYMCA Story. This is now a much sought after publication. His membership continued during the 1970s until around 1979.

In 1974 Jimmy embarked on a highly successful career as a writer and journalist. He contributed articles to both CHESS and the British Chess Magazine and authored a number of acclaimed books for Batsford, The Chess Player, Caissa Books and latterly, New in Chess. He also self-published the first book on Bobby Fischer’s successor entitled K is for Karpov! His books on Chigorin, Zukertort and Breyer are universally regarded  as some of the finest chess biographies published.

In 1979 Jimmy joined Metropolitan Chess Club to play in the London League A Division. He played top board and scored very highly with many significant scalps.

He joined Metropolitan  Chess Club. He joined Barbican, as did many other CENTYMCA players, following the hiatus over their Tottenham Court Road venue loss.

In December 2009 Jimmy visited the London Chess Classic and was photographed with VIP guest Viktor Korchnoi :

Jimmy was Editor of Middlesex Chessletter and Bayswater Chess in the early 1970s and produced major bulletins on the hugely successful Islington Congresses of the same period. He then worked for Pergamon Chess Books which led to his editorship of CHESS / CHESS Monthly magazine from until 2010 although his name remained on the masthead until February 2012.

In January 2016 Jimmy (together with Josip Asik) became co-editors of British Chess Magazine taking over from James Pratt and John Upham.
Jimmy also jointly edited Chess Informants 109-132 up to 2017 before taking on the role of Deputy Editor of the newly created American Chess Magazine whilst continuing to work as editor for Batsford Chess which had changed ownership over the years and had now been taken under the umbrella of Pavillion Books.

Here is an interview with Sarah Hurst from Kingpin Magazine 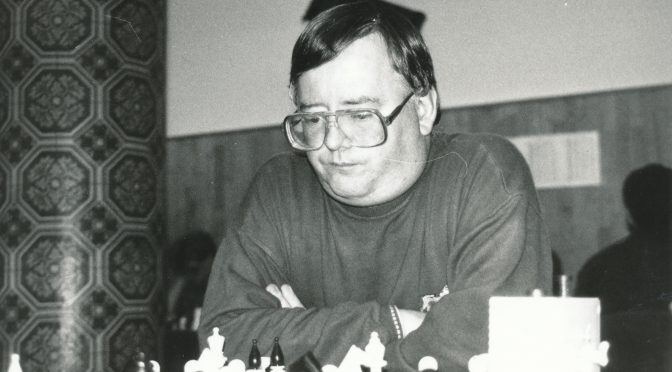 Paul is married (3rd November 2006) to (his second wife) Fiona and lives in St. Albans, Hertfordshire.

In the summer he gave up teaching and joined Phillips & Drew (stockbrokers). He now (ed : this was in 1983) lives with his (first) wife Sue and family in the wilds of Essex (Billericay).

We send birthday wishes to IM George Steven Botterill born on this day (January 8th) in 1949.

Here is his Wikipedia page

and here is his academic page

This was written about Keith aged 18 prior to the 1979 Spassky vs the BCF Junior Squad simultaneous display :

Keith finally secured the Grandmaster title in 1995 as a result of the final leg of the French League Championship. Keith gained the IM title in 1985 and then made his three norms at Ostend 1990, Parthenay in France in 1993, and in the French League finishing in March. He became England’s 26th holder of the GM title.
On August 8th 2021 Keith became the 2nd British Online Champion

Here is an interview with ChessBase from 2016.