‘The Rise and Fall of David Bronstein’ – Genna Sosonko.

20 chapters, 17 black and white photos. Foreword by Garry Kasparov which states ‘Bronstein was the first player to propose changing the starting position of the pieces’. Now, is that really correct? But the former World No.1 gives the book the thumbs-up adding: ‘Soviet reality was so complicated’. Now, that I do agree with!

First published in 2014 in Russian, this is a more recent translation of rather a sad book. In what way ‘sad’? Well, Davy B (1924-2006) was obviously a top chesser but the stress of World Championship matches – he drew a match for the crown with Botvinnik in 1951 – meant that the remainder of his life was spent trying to explain, regroup and, above all, recover. None of the games of the match are given; in fact, no games are given at all.

It all began sadly. Dad was seven years in the Gulag. Davy narrowly escaped the Holocaust. The author is at some pains to explain his subject and I believe Sosonko has succeeded. Bronstein blamed his baldness (“I gave my hair” he told me) on the life he was obliged to live.

Ridiculously overpriced – the cover price is £24.15 – the book, one of a series, tells the tale of a gentleman sent mad by a board game whilst war raged. His writings are given generous praise but his riches lay in his games and wonderful annotations. Here we get none of this.

I met David a couple of times, in London and then Hastings, just after the second Fischer-Spassky match. We got on well. I had always dreamt of meeting the Soviet GM so this was a treat that nothing could spoil beyond everyday comparison. I wrote about it – twice, I think – so repeating much of it here about 30 years later is not going to happen.

The Sosonko text contains dozens of classical references to foreign authors chessers are not going to have heard of. Much is delivered verbatim. Bronstein, a born raconteur, told stories far into his old age when much of chess was lost to him. Having heard one or two, I can assert Sosonko has the patience, background and great love of the game; in short an excellent amanuensis. And you won’t get far into the book without encountering irrelevance heaped upon irrelevance.

The publishers website contains a 12 page PDF which I hope you’ll find revealing.  I did not like this book. I doubt David Bronstein would have liked it either.

The author is a Dutch, formerly Soviet, Grandmaster.

(Also see ‘American Chess Magazine’ No.7, p.122 and Richard James’s review of same penned on this site last May). 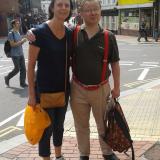 James Pratt  (on the right!)