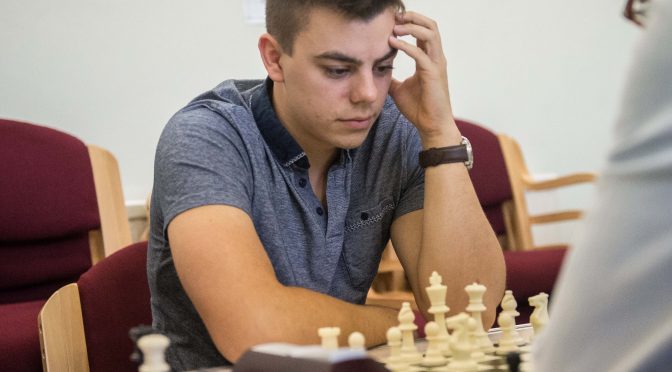 We send best wishes to IM Adam Taylor on his birthday.

Adam Christopher Taylor was born on Friday, January 23rd, 1998 in Colchester, Essex. Adam has a sister, Nathalie Leanne Taylor who also plays and studied History & Economics at The University of York. His mother Deborah was always supportive during his chess career.

He attended The Gilberd School, Colchester until 2014 and then Colchester Sixth Form College and currently resides in Colchester, Essex.

In that same year at Torquay Adam won the British Under-12 title sharing with Radha Jain.

Adam made his first 4NCL appearance in May 2012 for SC Stars followed by Anglian Avengers. In 2018 the lure of the big lights of Division One beckoned and Wood Green became Adam’s team now playing for Wood Green Monarchs in the Online 4NCL championship.

In 2017 Adam scored an impressive 6/9 (and =2nd) when he travelled to Greece to play in the Heraklion 1st Capablanca Memorial.

Adam has played for Bury St. Edmunds and Manningtree and now Battersea in the London League and Wood Green in the Four Nations Chess League (4NCL) and has made many appearances in the UKCC Terafinal.

Adam is known as Tayip99 on chess.com and as AdamTaylor2301 on LiChess.com and regularly streams on Twitch and other platforms.

On the 13th of September 2019 Adam became the sole director of MakingGrandmasters Limited which lists on its web site a number of leading young English players engaging in coaching such as Matthew Wadsworth, Ravi Haria and Daniel Fernandez to name but a few.

One of Adam’s more notable students is Guildford Chess Club member Jessica Mellor who, in 2018, won Gold in the Under-11 category of the European Schools Championship.

More recently Adam has taken a back seat from chess and has become a golf professional.

With the white pieces Adam favours a Reti/English set-up where c4 quickly follows a king side fianchetto. Here is a typical game of Adam’s with the white against a strong opponent :

With the black pieces Adam essays the Berlin Defence and the Sicilian Najdorf as well as the Benko Gambit and Nimzo-Indian Defence.