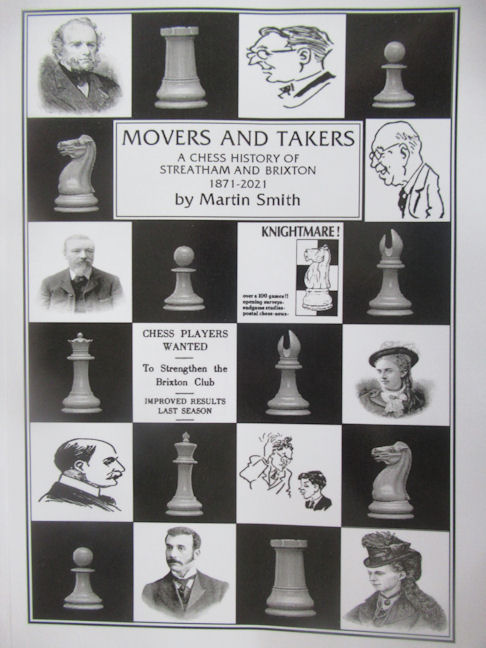 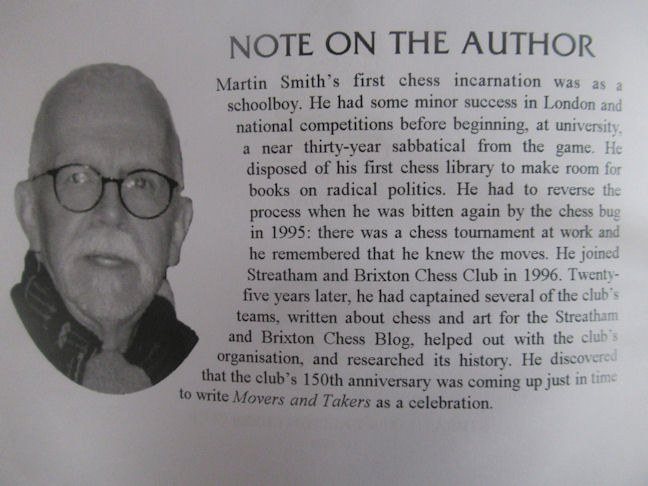 Movers and Takers is the 150-year story of Streatham and Brixton Chess Club, and of chess in our neighbourhood.

It begins with two separate clubs in Victorian times – one in north Brixton, the other in Streatham – amid the outburst of enthusiasm for chess in the expanding suburbs. The two clubs amalgamated half way through the story. Movers and Takers charts the cycles of ups and downs, the periods of feast and famine, the championship victories, and the dismal defeats of these clubs over a century and a half up to the present day.

You will meet the characters who made up the club during its long journey. There have been strong players who changed the club’s fortunes before they moved on. And there have been many average ones, who have yet been the lifeblood of the club, devoted to their passion, who sustained it through thick and thin. You will also meet players who, though not members, have passed through our neighbourhood while leaving their footprint on the wider chess landscape. They may grab our attention for that they did off the board as much as on it.

Streatham and Brixton Chess Club celebrated its 150th birthday last year, and one of their members, Martin Smith, has written a history of chess in that part of South London, taking the club through the Victorian era, two world wars, the English Chess Explosion and into a global pandemic.

The book was written for The Streatham Society, a local amenity group whose publications include volumes on local history, so its target market is residents and historians as much as chess players. There is, however, a selection of games at the end, roughly one for each decade of the club’s history, featuring a wide range of players, from world champions down to small children.

The current club traces its history to a club in North Brixton, originally named Endeavour, which appears to have been founded in 1871. By 1875 it was already considered one of the strongest suburban clubs, although at the time, in the very early days of chess clubs outside city centres, it was very much weaker than those in central London. It then went into hibernation for a few years before starting up again in 1879 and, within a few years, dropping Endeavour and becoming just Brixton Chess Club.

The club thrived, and was, albeit with some ups and downs recorded here, a powerful force in Surrey chess up to the First World War and on into the 1920s and beyond.

Brixton’s more genteel suburban neighbour, Streatham, acquired its chess club in 1886, but for much of its history it was not as strong as its more northerly counterpart. But by the 1930s, while Brixton’s fortunes were fading, Streatham was flourishing. Both clubs suspended activities during the Second World War, and, once competitive chess resumed, they agreed to merge, becoming the Streatham and Brixton club well known today in Surrey, London and national chess circles.

Martin Smith’s book offers an engrossing whistle-stop tour of 150 years of South London chess history. We meet a lot of famous people who have pushed pawns in this part of our capital, whether as residents, club members or visiting simul givers, from the likes of Staunton and Lasker, through to Harry Golombek in the inter-war years and Ray Keene in the 1960s, and then the likes of Julian Hodgson and Daniel King from the club’s more recent glory days. We also meet a variety of colourful characters such as occultist Aleister Crowley and Broadmoor problemist Walter Stephens, as well as a whole host of devoted administrators and organisers, the often unsung heroes who are the backbone of any successful club.

The Felce dynasty were prominent as organisers in Surrey chess for three generations. Here’s Harold, their strongest player, defending coolly against an unsound sacrifice to score a notable victory against the great Sultan Khan. Click on any more to display the game in a pop-up window.

The author does an excellent job of placing the club within its local community. We learn about the changing role of chess in society through the Victorian era and how this was reflected in the growth of clubs such as Brixton and the development of leagues in London and Surrey. There’s also a lot about the girls and women who played chess in the area: there were a surprising number, from Vera Menchik through to 1960s girl star Linda Bott (seen, below, at the age of 8) and beyond. Junior chess in general, of course, plays a big part in the latter half of the story: we learn about the popularity of chess in local schools, the pioneering books for young children written by Ray Bott and Stanley Morrison, and the sterling work done by Nigel Povah (whose grandfather was a prominent Streatham administrator) in coaching top juniors and introducing them to the club.

I wonder whether Linda’s 20th move in this game was an oversight (it’s very easy to miss backward diagonal moves) or a move displaying precocious tactical awareness. Only she would know.

Works like this are important in explaining the background behind club chess, and, if the subject appeals, this book won’t fail to please. You might see it as complementing my Minor Pieces articles, particularly those involved with Richmond and Twickenham players, and, given that Martin and I have discussed our respective ideas over several pints during the course of his research, you’ll understand where we’re both coming from. It’s very well written and copiously illustrated throughout: the expertly chosen photographs and press cuttings add enormously to the story.

I’m sure it would have been easy (perhaps even easier) for Martin to have written a book two or three times its length, and as a chess player you’d perhaps like to have seen more chess as well, but, given the limitations of writing primarily for a non-chess playing readership, he has done an outstanding job in compressing the story into a relatively short volume. Perhaps he might consider an expanded version for private publication.

I did spot a few minor mistakes: misspelt or incorrect names and incorrect dates, for example, but this won’t spoil your enjoyment of the book. Strongly recommended for anyone with any interest at all in the history of British – and London – chess over the past 150 years.

If you’d like to buy a copy, the book can be ordered by providing a postal address to SFChess@btinternet.com, who will provide a/c details for payment of £12.50 plus £2.50 P&P. 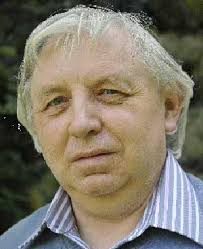