There are those who are of interest because, like William Ward, they’re strong chess players who had distinguished careers. We can follow their results and study their games.

Richard Exton Gardner was one of those. You might have seen this 1902 Surrey Trophy match card before. There, on board 7, was RE Gardner, which tells us he was a decent club standard player.

Richmond wasn’t Gardner’s only club. Here he is, in 1900, playing for West London against Athenaeum, who featured William Ward on top board.

Here he is again, in 1904, playing for West London against an Oxford and Cambridge team. The match below, against City of London, saw both William Ward and George Edward Wainwright in action, with Harold Francis Davidson, later the Rector of Stiffkey (who was eaten by a lion) and star of The (Even More) Chess Addict among the opposition.

But who was Richard Exton Gardner?

The company we now know as Yardley was founded in London by William Cleaver in 1770. His son married a Yardley, and, for obscure financial reasons, the firm acquired the name it still uses today. At some point, probably round about the late 1860s, an ironmonger’s son from Bristol, Thomas Exton Gardner, found employment there, and, clearly ambitious and talented, found himself at the top of the tree.

After moving round various addresses first in Central, then in West London, the family settled at 2 Branstone Road, Kew (almost opposite the Lion Gate entrance to Kew Gardens). The 1881 census found Thomas and his wife Elizabeth at home, along with their four young children, Ida May, Thornton Ernest, Dora Annie and Richard Exton. They were wealthy enough to employ a domestic servant and a nursemaid.

Thomas died in 1890 at the age of only 51, after which Yardley fell into decline, but the family were still involved and young Thornton and Richard joined the management team: in 1900 Thornton was Managing Director and Richard, only 21 at the time, Company Secretary.

The 1901 census found Elizabeth and her four children still at the same address, along with their 20 year old cousin Dora Fordham, a housemaid and a cook, both teenage girls. Thornton was described as the manager of a soap factory and Richard a clerk.

So here we young man whose hobby was chess and was already playing for his two local clubs: Richmond and West London. In an age where children rarely played chess, he would have been considered a player of some potential.

It seems, though, that his chess career was short: understandably he decided to put his business interests first: under Thornton and Richard’s stewardship Yardley grew and thrived, and still does so today. If you use their soaps or scents you have them to thank.

Let’s continue Richard’s story, as there’s still much of peripheral interest to relate. In 1905 Yardley opened a new factory in Carpenters Road, Stratford, which runs through what is now the Queen Elizabeth Olympic Park.

In 1908 he married (Gertrude) Vere Uffindell, the daughter of a naval engineer. They both gave their address as 66 Elgin Crescent, Notting Hill, so the family had moved away from Kew. By 1911 Richard and Vere, now expecting their first child, were living on the premises in Carpenters Road along with a servant. A son, Charles Exton Gardner, was born later that year, and another son, named Richard Exton Gardner after his father but known to family and friends as Jimmy, would follow in 1914.

Did Charles and Jimmy follow their father’s interest in chess? Not to any great extent, it seems: they took up a different hobby, aviation, which would play an important part in both their lives.

In 1936 Charles won the King’s Cup flying a Percival Vega Gull owned by his younger brother, and the following year he repeated his success, this time in a Percival Mew Gull. 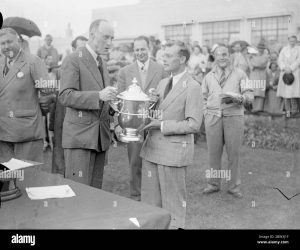 In the summer of 1938 the two brothers made the headlines across the country when Jimmy’s plane was stolen. Teenagers involved in a foolish and dangerous prank involving an aeroplane? Who’d have thought it? This report is from the Bucks Herald (12 August 1938). 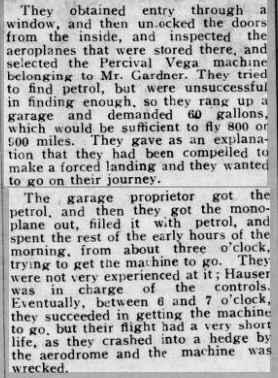 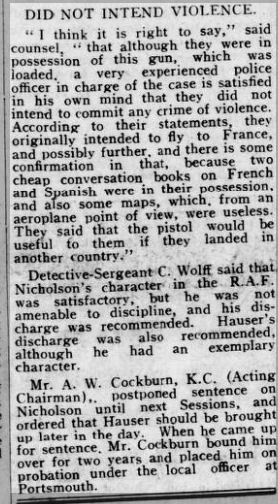 So they were let off because they were nice middle-class boys?

You might want to consider the name of the prosecuting counsel. Vernon Gattie, or Vernon Rodney Montague Gattie QC CBE, as he later became, was the son of Walter Montague Gattie, one of the strongest English chess players of the 1880s, who played for Oxford in five varsity matches. It’s unlikely that Walter knew Richard senior, but they would probably have had some shared acquaintances. The acting chairman, Archibald William Cockburn KC, seems to have been a very distant cousin of Alexander Cockburn, the author of Idle Passion : Chess and the Dance of Death

I expect you want to know what happened next to the miscreants, don’t you?

Gerald, as far as I can tell, worked as an aircraft fitter, never married, and died at the age of 64. Peter, who may have been the instigator of the escapade, and spent a month in hospital recovering from injuries sustained in the crash, was up before the bench again the following year, charged with separate offences of stealing a camera and a raincoat.

He then joined the RAF Volunteer Reserve, rose to the rank of Sergeant in 602 Squadron, and lost his life on 11 December 1942. The 602 Squadron, which flew Spitfires, was based in Scotland but also took part in the Battle of Britain in 1940. Did Peter fly a Spitfire in the Battle of Britain? Seemingly not, as he’s not on any online list of pilots. What were the circumstances of his death? “Details not known” according to the website of the 602 Squadron Museum.

You’ll also want to know what happened to Charles and Jimmy Gardner.

By 1939 Charles was an operational officer in the Air Ministry and presumably served in that post during the Second World War.

Richard Exton Gardner junior (Jimmy) joined the Fleet Air Arm and became a fighter pilot under Douglas Bader, flying Hurricanes in the Battle of Britain. Unlike many of his brave colleagues he survived the war: you can read all about him here. 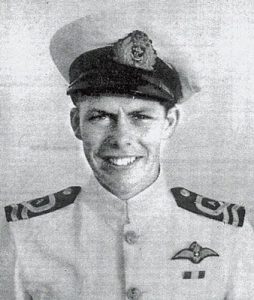 After the war, both brothers rejoined their family firm, where they remained until retirement.

Not very much chess in this article, I’m afraid, but still an interesting story. Join me again soon for some more Richmond Chess Club members from the 1900s.

Other websites linked in the article