On 8 April 1882, Edward Griffith Brewer posted an advertisement in the Surrey Comet. The great Joseph Henry Blackburne was going to give a blindfold simultaneous display at Twickenham Chess Club. 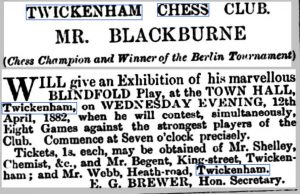 The following week, they published a report:

As local papers usually did, and still do, they got it wrong, quite apart from calling a simul a tournament. George Edward Norwood Ryan wrote in to complain. 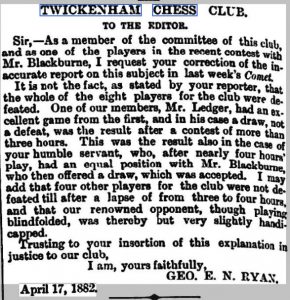 This event even reached the pages of Volume 2 of the British Chess Magazine. 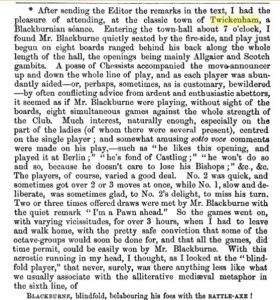 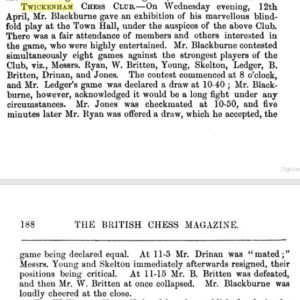 We now know the names of some of the strongest members of the first Twickenham Chess Club.

You will note Mr. B. Britten and Mr. W. Britten were the last to finish. Sharing a relatively unusual surname, surely they must have been related. Perhaps they were also related to Benjamin Britten.

It’s time to have a look.

Here they are, next to each other in the 1882 London Overseer Returns, in effect an electoral roll.

Bashley and Wallace. Wallace and Bashley. Even better than Wallace and Gromit. Don’t you think everyone should call their son Bashley?

The splendidly named Bashley didn’t live in Twickenham very long. He was born in 1825 in Milton, Hampshire. He seems to have moved to Twickenham in about 1880, having previously lived in Redhill.  The 1881 census found him in Twickenham with his wife Susanna, along with a cook and a housemaid, and claiming to be a Gentleman.

But he’d previously been an engineer and inventor. He was best known for Britten’s Projectile, which involved applying a coating of lead to projectiles fired from cannons, and was much used in the American Civil War. I’m not sure that his namesake Benjamin, a lifelong pacifist, would have approved. If you, on the other hand, would like to know more, you could always read his book.

This was not his only invention. Here is an improved printing telegraph, and he also took out a patent for using blast furnace slag to manufacture glass.

A few months after the Blackburne blindfold simul, Bashley went on holiday to the Scottish Highlands. On 12 August, while visiting the port of Ullapool, he died suddenly at the age of 57.

He must have been very fond of the area: if you visit there today you can find his memorial. The inscription reads: In memory of/BASHLEY BRITTEN/aged 57 years/of Twickenham, Middlesex/died at Ullapool/Augt 12th 1882.

Sadly, Bashley wasn’t able to enjoy the delights of playing chess in Twickenham very long. His namesake Wallace, however, was around rather longer.

First of all, I can find no relationship at all between Bashley and Wallace, nor to the Northampton player W E Britten, who played in the same team as William Harris and against teams including members of the Marriott family. Nor, as far as I can tell, were any of them related to Edward Benjamin Britten.

There is another connection, though, between Bashy and Wally. Bashy’s only daughter, Ada, married Algernon Frampton, who worked on the Stock Exchange, as did Wallace Britten.

We can pick him up on the 1881 census: he’s 32 years old, a clerk to a stock & share jobber, living with his wife Emily and his sister-in-law, together with a servant and a boarder. Further searching reveals that they had had two children, born in Islington in 1872 and 1874, who had both died in infancy.

By 1891 they’d moved to Rozel, 5 Strawberry Hill Road, then and now one of the most desirable streets in Twickenham. They now had a one-year-old son, Wallace Ernest, and two of his wife’s sisters were living there along with two servants. Wally was by now a Member of the Stock Exchange, so must have been doing pretty well for himself. He was still involved with Twickenham Chess Club at the time, but the last reference I can find for him is the following year. Perhaps increasing demands of work, or the desire to spend time with Wally Junior, made it harder for him to pursue his favourite game.

He’d remain at the same address for the rest of his long life. He died on 16 March 1938, and is buried in Teddington Cemetery. According to his probate record, he left £5,328 13s 5d to his son Wallace Ernest Britten, Colonel HM Army and his nephew Julius Campbell Combe, Authorised Stockbrokers Clerk. Wally Junior would eventually become a Lieutenant Colonel in the Royal Engineers, and be awarded the OBE: his son Robert Wallace Tudor Britten would also have a distinguished military career. Again, Benjamin would not have been happy.

Wallace Britten, apart from being a pretty useful club chess player, was a man who seems to have led a successful life, but one marked also by the sadness of losing his first two children. But where did he come from? He married in early 1872, but if we consult the 1871 census we might ask “Where’s Wally?”.

I eventually managed to track him down in Islington, working as a clerk and lodging with the large family of a builder named Julius Combe, a name you might recognize. His name appears to be Walter rather than Wallace, and his age seems to be 30 rather than 23. It was one of Julius’s daughters, Emily, he married the following year. I can’t as yet find him in 1861: it’s quite likely he was away at school: school pupils were often only listed by their initials in census returns. If I look for Walter, rather than Wallace, though, he’s there in 1851.

His parents, it seems, were Edwin Josiah Britten and Selina Pedder, and there he is, aged 3, living in Bloomsbury with his parents, big brothers Edwin and Alfred, and baby sister Laura. (Edwin Junior had been baptised at St Clement Danes Church by William Webb Ellis, who allegedly invented rugby by picking up a football and running with it.) Edwin senior was a Fancy Leather Worker employing two persons. Another daughter, Rachel, would be born the following year, but in October 1852 his father was admitted to the lunatic asylum at Colney Hatch, where he died in 1855. By 1861, Selina had taken over her late husband’s business as well as bringing up her children, but Wallace/Walter wasn’t there.

How did this scion of a lower middle class family end up on the Stock Exchange, playing chess and living in a substantial house in a Thames-side suburb? The answer is that we don’t know. He certainly wasn’t lacking in either ambition or ability.

His grave looks like it needs a bit of attention, but at least he has one, unlike Florence Smith, who died three years before him and lies in an unmarked grave. Her sisters and children never visited, but her grandson pauses in remembrance every time he passes by. Next time you find yourself playing chess in Twickenham, spare a thought for the Britten boys, Wallace and Bashley, two of the leading players in the early years of the first Twickenham Chess Club.