In January 1924 there was some big news for chess players in the Richmond area. A new chess club, the Barnes Village Chess Club, was to be formed.

None of the names at this meeting are familiar, but they soon started playing matches against other local clubs.

Here they are a year or so later, visiting their Richmond neighbours at the charming Cosy Corner Tea Rooms, as well as entertaining Ashford, who may well have travelled by train on the Waterloo line, but not stopping at Whitton or North Sheen: those stations were only opened in 1930.

And, look! They have two pretty strong veterans on the top two boards, no doubt delighted when a new club opened on their doorstep.

Here they are again, more than forty years earlier, playing again on the top two boards for the City of London Chess Club Knight Class in a match against Oxford University.

Messrs Hooke and Taylor were playing in the Knight Class of the City of London Chess Club: they’d have received odds of a knight when playing master strength opponents in the club handicap tournament. The Morning Post (4 December 1882) reported: “The result was a surprise to both parties, and appeared to puzzle the winners just as it did the losers.”

This wasn’t the first appearance of Mr Hooke in the chess news. His first appearance was in the 11th Counties Chess Association Meeting at the Manor House Hotel, Leamington in October 1881, where he played in the second class section, winning this game. You can click on any move in any game in this article for a pop-up window.

The up-and-coming Joseph Henry Blake from Southampton shared first place in the second class section with George E Walton from Birmingham. The information as to where Hooke finished and how many points he scored seems not to be available. The first three places in the top section were filled by members of the clergy: Charles Edward Ranken, John Owen and William Wayte.

Earlier in 1882 he’d beaten Captain Mackenzie in a simul. He’d also travelled to Manchester for the 12th Counties Chess Association Meeting, where he finished fourth in Class 2 with a score of 7½/11. Here, then, was an ambitious and fast improving young player, keen to play whenever the opportunity arose.

By 1884 George Hooke and John Taylor had both graduated to Class 3 (pawn and two moves). In this match they met a team from Cambridge University.

Let’s deal quickly with Mr Taylor. John H Taylor was Irish, born in County Westmeath in 1853, and, by profession a railway accountant, a not uncommon occupation at the time. He was active in the City of London Chess Club in the 1880s and 1890s but seemed to drop out of chess until the Barnes Village club opened its doors, when, in retirement, he threw himself into their activities, right up to the end of his life in 1937.

Mr Hooke was rather stronger, and rather more interesting. He’s most famous for a game he lost against the aforementioned Mr Blake, which has been much anthologised, often with the missed brilliancy on move 9 substituted for the actual conclusion, and often also with an incorrect year. Here’s its first appearance in print.

And here it is for you to play through yourself.

You’ll observe that the annotator, not having the benefit of Stockfish 15 to consult, mistakenly refers to Blake’s 11th move as a very fine move. It was a creative try which worked over the board, but Hooke could have won by playing, amongst other moves, 11… Qc8 or Qb8, making room for his king on d8. I’ve always found the 9. Qxf6 variation particularly attractive, with the knights returning to f3 and c3 to deliver mate.

Joseph Henry Blake was another prominent figure with a very long chess career, the latter part of which took place in Kingston. With any luck he’ll be the subject of some Minor Pieces in future.

George Archer Hooke was born in Chelsea on 28 February 1857, the third of twelve children of William Hooke and Harriet Sanders, six of whom tragically died before reaching the age of 20.

Here, from the family archives, is a photograph of William. 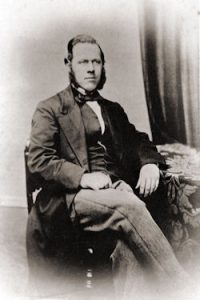 The family are elusive in the 1861 census, but in 1871 we find William working as the manager of a furniture depository living in the Parish of St George’s Hanover Square with his wife and eight children. They have no servants living in, which suggests the family was not especially wealthy.

By 1881 they’re at a different address, but still in the same parish. William seems to be in very much the same job. There are six children at home, along with a granddaughter. George, still living at home, is working as a 3rd Class Clerk in the Seamen’s Registry Office of the Board of Trade. He would remain there for the rest of his working life.

It must have been round about that time that he joined the City of London Chess Club, having learnt the game from his father at the age of about 12. He would soon join the North London Chess Club as well.

Moving into the middle of the 1880s, here’s a game from a match between the City of London and St George’s Chess Clubs, in which he faced the Hon Horace Curzon Plunkett, MP, rancher, agricultural reformer and uncle of writer and chess player Lord Dunsany. (He was ranching in Wyoming at the time: this must have been one of his visits back to London.) As the game was unfinished at the call of time it was adjudicated by Zukertort. His verdict was a draw, but Stockfish 15 disagrees, thinking Hooke had a winning position.

In August that year he played in the 15th Counties Chess Association Meeting in Hereford, playing in Class 1A where he shared first place with his former antagonist Charles Dealtry Locock.

The parallel Class 1B tournament was won by George Edward Wainwright, and the two Georges then contested a 14-game match in London, with George H winning by the odd point. This match wasn’t well reported: it’s not clear whether it was a formal play-off match to decide the winner of the Hereford tournament or purely a friendly encounter.

In this league game against an anonymous opponent Hooke brought off a neat finish, giving up a rook to force checkmate in the ending.

In an 1886 match between City of London and St George’s, he encountered one of the Fighting Reverends, Rev William Wayte, who had been one of England’s strongest players back in the 1850s. (You might notice that his Wikipedia page quotes from The Even More Complete Chess Addict, by M Fox and R James.) This time no adjudication was required: George managed to grind out a win with an extra pawn in a rook ending. Towards the end of his life, he mentioned a win against Wayte from 1885 as one of the games that gave him most pleasure: I presume he intended this one, even though the year doesn’t quite tally.

In the same year, 1886, George won a share of the brilliancy prize for this game in the City of London Chess Club Handicap Tournament against an opponent who got stuck in the mud adopting an unusual defence: we’d now call it a Hippopotamus.

In 1886 Hooke took part in the Amateur Championship of the 2nd British Chess Association Congress in London, scoring an outstanding success. Walter Montagu Gattie won with a score of 15/18, and George Archer Hooke featured in a three-way tie for second with Antony Alfred Geoffrey Guest and George Edward Wainwright. Unfortunately, few of the games from this tournament have been published.

Although most of the games took place during the summer, it was only concluded in October, by which time George was involved in another tournament. This was the British Chess Club 2nd Class Tournament in which he again finished in second place. His score of 3½/5 left him half a point behind Scottish champion Daniel Yarnton Mills. Here’s their game, which resulted in a draw.

Handicap tournaments were a big feature of every competitive chess club at the time, and for many years later. Perhaps they should be revived. They worked something like this.

Here’s how George Hooke defeated a player two classes below him who foolishly launched a kamikaze attack right from the opening rather than playing solid, sensible moves. (We start the game with the white pawn already on e4.)

By now, it seems that, while George Archer Hooke continued to play regularly in matches and club tournaments, he no longer had the time to travel to places like Manchester and Hereford for congresses. Perhaps his work with the Board of Trade was taking up more of his time: as a young man of considerable abilities approaching his 30th birthday he would doubtless have been promoted by now.

Perhaps there was another reason as well.

Here he is, on August 27 1889, now aged 32, marrying 34 year old Ellen Farmer at All Saints Church, Fulham, right by Putney Bridge. Congratulations to the happy couple!

You already know that he was still playing chess in the 1920s so there’s lots more to tell.

You’ll find out what happened next in the second instalment of the story of George Archer Hooke, coming very soon to a Minor Piece near you.