From the Publisher’s Foreword:

It has been four years since the publication of Dynamic Decision Making in Chess and certainly there will be one person out there wondering what happened to us and why the third volume was taking so long to complete. I hope that the content alone of these two books will answer that question.”

From the back cover:

“In Decision Making in Major Piece Endings former World Championship Challenger Boris Gelfand discusses his path to decision making in endgames involving rooks or queens, as well as the neglected “4th phase”. Countless games are decided by good or bad technique in such endgames, so readers are certain to benefit from the insights of a word-class Grandmaster on this vital topic.

Grandmaster Boris Gelfand has been an elite player for over 30 years, winning the World Cup, Olympiad Gold, the Candidates and many other top tournaments. Grandmaster Jacob Aagaard is the only chess writer to have won all the major awards for chess writing. ”

Reaction to previous volumes in the series:

In 2015 Positional Decision Making In Chess won the ECF Book of the Year award.

“The most interesting chess book I have read in the last quarter-century.” Mikhail Shereshevsky on Positional Decision Making in Chess.

This new Quality Chess publication Decision Making In Major Piece Endings uses high quality paper and the printing is clear. The book can easily be laid flat next to the board and does not require weights to prevent it from “self-closing” (a particular bugbear of ours !). Each diagram is clear and the instructional text is typeset in two column format, which, we find, enables the reader to maintain their place easily. Figurine algebraic notation is used throughout and the diagrams are placed adjacent to the relevant text and each major diagram has a “to move” indicator. Where a “to move” indicator is not present, it is obvious which colour is to move from the accompanying moves in a variation.

Each chapter is introduced with a contemporary photograph of a player or players or a tournament  scene which  launches each chapter in a engaging manner. This is followed by a Diagram Preview page which shows the critical analytical diagrams in the following chapter and invites the reader to practise their analysis and decision making! If you can work out most of the variations you are a world champion.

The introduction of this book makes it clear that this book is not an endgame primer or manual on basic major piece endgames as there are plenty of these theoretical works already in existence.  Knowledge of very basic rook and pawn endgames such as the Lucena and Vancura positions is assumed.  This book is “about decision making at the board and learning from your games – and those of others. In this book I will discuss topics that have arisen in some of the most interesting games without minor pieces during my career. We will encounter rook endings, queen endgames and games in what Romanovsky called the fourth phase, which is essentially later middlegames/early endings where only major pieces remain.”

The introduction also guides the reader on how to study the endgame: 1. knowledge of basic positions and their key variations and ideas must be known; 2. improving deep analytical skills; 3.  development of intuition. This book concentrates on improving items 2 & 3 above. The author suggests how to best use the book by first analysing the endgames without a chess engine and/or tablebases to prevent lazy thinking by relying too heavily on engine assessments without understanding.

Despite the fact that the introduction claims that this book is not an endgame primer, there are a couple of excellent chapters on theoretical endgames. They are covered from a practical point of view and Gelfand draws out the key defensive ideas by concentrating on patterns and key positions.   More on these chapters later. There are other basic endgame positions interspersed in other chapters which are reached from long variations but are nevertheless didactic as the theoretical endgames are shown in context within the whole endgame and the reader is clearly shown how these positions can be reached in practice.

Here is an critical position from the game Julian Hodgson – Boris Gelfand played at Groningen 1996. Both players misevaluated this ending as they both thought that black was easily winning. At the time, endgame theory agreed with them. Modern tablebases give this as a clear draw as black cannot hide his king from the checks with accurate defensive play from white.

The author makes the point that if white had known that the endgame was a draw, and knew a few general ideas, he would have probably drawn the game. But when you think it is lost, psychologically it is impossible to hold it, particularly in an increment finish. A lot of the top players do not think in terms of lost or not: they concentrate on looking for ideas (to make life difficult for the opponent).

Chapter 1  – The Importance of Analysis

The title of the chapter is self explanatory and Gelfand stresses the need to study complicated endgames in depth and understand all the nuances. There are some superb examples of brilliant analysis. Here is one such position where Gelfand did not discover the right idea until 2018:

Chapter 2 Do Not Hurry

The “Do not hurry” concept is a key concept that I first encountered in Shereshevsky’s classic Endgame Strategy. In the position below, this principle can be demonstrated aptly.

Converting this position is covered in detail with a key discussion on exchanges which is enlightening.

This rook ending could have occurred and black’s winning’s manoeuvre is instructive:

63…Rc5 64. Rc7 Rc3+ 65. Kf2 Rc4 66.Kg3 Now the black rook has been optimally placed, it is time to improve the king to the maximum, while keeping the best possible pawn structure, which is to keep the pawn on g7 and play …f6, so that White does not have Rc8 followed by c6-c7. If the pawn would be on g6 in that position, Rg8 would  eventually come and save a draw. The best black would achieve is f- and h- pawns, but not in favourable circumstances. With the pawn on g7, …Rxc7 will always come as a response to Rg8 and black wins trivially. 66…Kf6 67.Kh3 Kg6 68.Kg3 f6 And black wins after either 69.Kh3 Kh6! followed by the advance of the g-pawn, or 69.Rc8 Kf5! and the advance of the king.

This is a variation from an interesting rook and pawn endgame Boris Gelfand – Lars Bo Hansen Wijk aan Zee 1993:

White wins with the instructive 64.Rc7!! preparing to cut black’s king off along the fifth rank 64…Rh1 65.Rc5! and if 65…Kd6 66.Rc6+, white can then simply queen the b pawn winning black’s rook whilst black’s king is unable to support his own pawn.

Here is another common type of position taken from a variation in the game Gelfand-Vladimir Kramnik Zurich 2017. White is clearly much better as his king supports his pawn and black’s king is not in the game. But how does white win?

This chapter is one of the theoretical chapters which covers rook and four against three all on one side and rook against three connected passed pawns. This section is well constructed with coverage of all the major positions and ideas in the 4 v 3 ending.

Some famous games are included which must be present in every treatise on rook endings. Here is one such ending from: Mikhail Botvinnik v Miguel Najdorf Moscow 1956:

The celebrated endgame Capablanca-Yates Hastings 1930 is of course covered in great detail. The analysis of the famous position is covered in great depth showing the defender’s best defence which is tricky to crack. It is revealing to note that even the great Cuban World Champion let the win slip at one point. I suggest that the reader buys the book to study this superb analysis.

The position below is the celebrated game Piket-Kasparov Internet 2000 because Kasparov misplayed a drawn endgame so badly. We must not be too hard on the former World Champion as it was a rapid game and Kasparov is a superb endgame player.

In the game, black lost in a similar manner to Botvinnik-Najdorf:

White to move wins with 1.Rf8, black to move draws only with 1…Kg7! preventing the rook from moving behind the base of the chain. 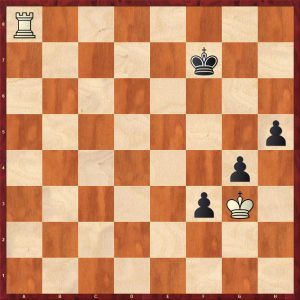 Similarly in the mirror position, white to move wins with 1.Rh8, black to move draws with 1…Kg7!

The core of the book (chapters 5 to 8) is a series of four chapters deeply analysing three rook and pawn endgames of Gelfand’s against world class opposition. The games are shown in their entirety which is the modern way to study endgames in relation to the opening and middlegame.

60.Rc6 a5 61. Rc5+ Kg6 62.Rxa5 f5 and black prevents the rook from reaching f8. This is obvious when one has knowledge of the basic endgame rook v 3 connected pawns shown above! The author has shown an excellent example of knowing your basics being applied to a real live game.

Chapter 9 Queen Endings with a g- or h- pawn

This is one of the reviewer’s favourite chapters as it combines endgame theory with practical examples showing that even strong GMs do not know how to defend these endings correctly. Even when players know where to put their defending king, choosing the correct check to draw is not obvious!

Here is a position from Gelfand-Jobava from Dortmund 2006.

The reviewer loves this endgame.

Now white can enter a winning queen endgame with 58.Kg6!

White did not play the endgame perfectly, and after many adventures this position was reached at move 87. Black is drawing here if he places his king in the drawing zone which is the far corner diagonally opposite where the g pawn is hoping to queen i.e. a1.

Now 95.Qh3! wins cutting off he black king from the drawing zone. Gelfand won  the game easily after another 18 moves. The best defence involves white winning by transitioning through the two diagrams below exploiting black’s king position to misplace the black queen. Absolutely fascinating stuff.

This section is entertaining with some really exciting and amusing positions. Here is one such position:

This is the beautiful but sad moment of the game. Black played 74…Qxf3+? and went on to lose quickly. 74…Qdxf2+!! draws by sacrificing all three queens for stalemate, for example 75. Qfxf2 Qxg3+ 76. Kxg3 Qc3+ 77. Qxc3 stalemate. Fantastic! Who says there is no humour in chess ?

This chapter covers the famous game Botvinnik-Minev Amsterdam 1954 which goes into a celebrated Q + g pawn v Q ending which Botvinnik won from a drawn position. As Boris Gelfand points out, once we know that an article written by Paul Keres in the 1947-1949 Soviet Yearbook  recommended that black place the king on a4, black’s moves become completely understandable.

Chapter 12 – Conversion in the 4th Phase

This chapter covers a complex Q and double rook late middlegame which reveals the complexities of such positions. The game clearly shows that a sustained initiative is so potent.

The penultimate chapter is a series of studies which are elegant and instructive. There is a particularly beautiful study by Darko Hlebec. Buy the book to appreciate the beauty of chess.

The final chapter is a series of  rook exercises which are extremely didactic. If you can solve all of these, you are a World Champion.

I heartily recommend this superb book on major piece endgames which is a labour of love and hard work. It combines practical examples with coverage of basic endgame positions.