Six months or so ago I had the opportunity to review Tim Harding’s excellent book Steinitz in London.

Whenever I see a game of chess I want to know more about the players, so did a bit of research into a few names that caught my eye. I threatened to write more about them at some point in the future. My first subject is Samuel Walter Earnshaw.

Tim gives two games played in Autumn 1866 between Earnshaw, a member of Birmingham Chess Club, and Steinitz. There’s another game further on in the book played at an unspecified date.

If you know anything at all about 19th century English chess history you’ll be aware of the number of clergymen who played. This seems to have been a specifically British – or even English – phenomenon.

Father Sam wasn’t one of the strongest of the Fighting Reverends, but he turns out to be rather interesting. He was born in Cambridge in 1833, the oldest child of Samuel and Ann (Wall) Earnshaw. Samuel senior (1805-88), originally from Sheffield, was a clergyman, but also a mathematician and physicist, still remembered today for Earnshaw’s Theorem. This is apparently something to do with magnetism, but I didn’t understand a word of the explanation. If you want to find out more I suggest you contact Dr John Upham, who studied this sort of thing for his doctorate. 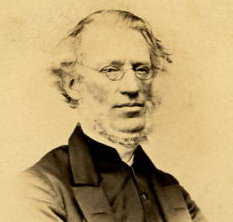 And here, from an online family tree, he is. The tree also includes photographs of some of Samuel Walter’s brothers, but I haven’t yet been able to locate an image of the man himself.

He had a large family, and several of his sons emigrated to America, but his oldest son stayed in England, following in his father’s footsteps to Cambridge, and then into the church.

Samuel Walter held his first curacy in Bromley-by-Bow, in East London, from where, in 1858, he didn’t have far to go to watch Morphy in action. It was probably there that he first met Samuel Boden, who was to become a lifelong friend. (You might want to describe him as Boden’s Mate.) His next post was in Birmingham, from where he moved a short distance to the small village of Nether Whitacre, twelve miles or so from the city centre. By 1865, now in his early 30s, he was active in the Birmingham chess scene, and his games were being reported in local and national publications. But he also  had to make time for his clerical duties. We can pick him up in the Nether Whitacre registers, which record baptisms, marriages and burials in the parish. Here he is, for example, at about the time he played Steinitz in 1866, officiating at three baptisms. 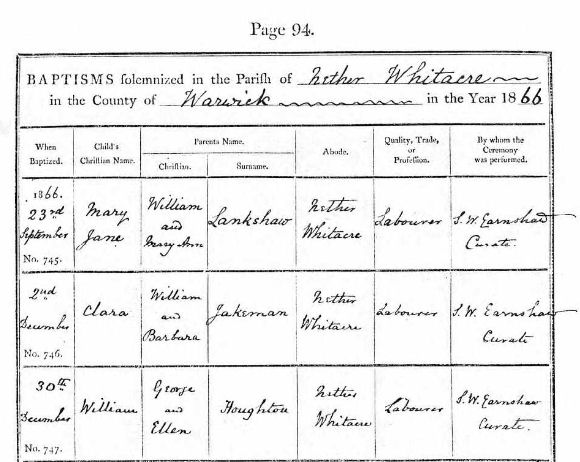 The following August, though, he was to be involved in a tragic incident. The Coventry Standard of 16 August 1867 reported: 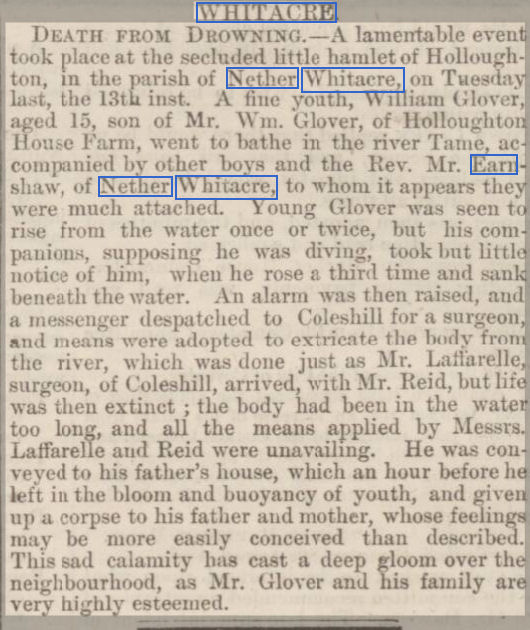 Nothing sinister should be taken from this. These days we’d be suspicious of a vicar being ‘much attached’ to ‘fine youths’ and taking them for a swim in the river, but relationships between adults and children were very different in those times.

It’s understandable, though, that Samuel might have felt the need to move on. After a brief curacy in Wales his career, quite typically for the time, changed direction, and he took on the post of Headmaster of Archbishop Holgate Grammar School, Hemsworth, Yorkshire, not all that far from his family roots. In 1888 the school would move to Barnsley, where it would educate the likes of Michael Parkinson, while the new Hemsworth Grammar School would count Geoff Boycott amongst its most famous alumni.

His new job seems to have left him little time for chess, and we don’t hear from him again until 1877, when he appears to be a member of chess clubs in both Sheffield and Leeds.

By this time he may have come to the end of his time at Archbishop Holgate, and he shortly took on a new post as Rector of Ellough, in Suffolk. Here, the work was less demanding and he was also rather nearer London, so he was able to travel down to the capital’s chess haunts where he was once again able to indulge his passion by taking on the great players of the time. He was also very happy to submit his losses for publication, so there are quite a few games available in newspaper columns, which might be the subject of another article.

The next decade saw him continuing what must have been a relatively quiet life, bringing up his children, tending to the needs of his parishioners, and, once every seven weeks, at least up to 1884, visiting London for a few games of chess.

He died at the relatively early age of 54 in 1887. Perhaps he’d been unwell for some time as there’s no chess reference to be found for the last three years of his life.

An obituary, presumably written by another of the Fighting Reverends, George Alcock MacDonnell, appeared in the Illustrated Sporting and Dramatic News. 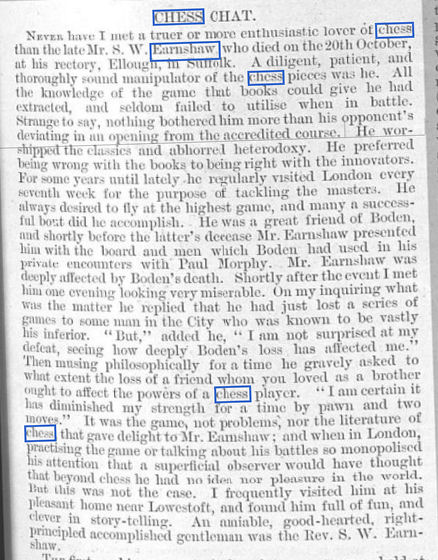 “He preferred being wrong with the books to being right with the innovators.”: yes, we all know players like this! It sounds like he was a solid and knowledgeable player, but perhaps lacking either the inspiration or the opportunity to reach master standard. A true and enthusiastic lover of chess, though, amiable, good-hearted and right-principled. A devotee of Caïssa could hardly hope for a better obituary.

The reference to Boden’s board and men is rather odd: I suspect there’s a mistake and it was actually Sam B who presented his set to Sam E before his death, not the other way round. I wonder what happened to the set: does anyone know? Perhaps it was handed down to one of his children.

That’s the end – at least for the time being – of Samuel Walter Earnshaw’s story. It’s not the end of my story, though. 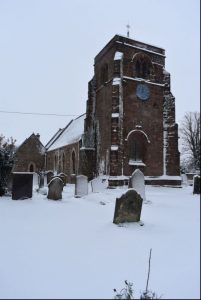 Let me take you back to the church of St Giles, Nether Whitacre, on 30 December 1866. The foundation dates back to Norman times, but by then it may have been in a state of disrepair, as it would be rebuilt in 1870, not long after Samuel Earnshaw’s departure.

It’s the Sunday after Christmas, so the congregation will still be celebrating the birth of Christ  as well as looking forward to the new year ahead. There, we see the Houghton family (they pronounced it Howton rather than Horton, I believe). They’re a bunch of, frankly, rather undistinguished farm labourers, like most of the parishioners, but they’re dressed up in their finery today for the baptism of baby William. We really want to talk to his Aunt Jane, though, a sister of Will’s father George. She’s ten years old and proud to be wearing her Sunday best. Shall we reveal what her future holds?

Jane will marry a man named Charles Woolley, a blacksmith from Berkswell, some ten miles to the south of Nether Whitacre. She will present him with four strong and healthy sons, but their two youngest children will sadly die in infancy.

Their oldest son, Thomas, will become a farmer: he and his wife Kate will have to wait 15 years, though, for their only daughter to be born. After Janet’s birth, her mother will be confined in the county Lunatic Asylum, perhaps suffering from what would now be called post-natal depression. Tom, needing help with the farm and the new baby, employs a housekeeper, a middle-aged widow named Florence Smith. One thing leads to another, and, by the time Kate returns home, Flo is expecting Tom’s child. It’s now 1921, and Betty will be brought up by two of Flo’s many sisters, moving to another part of the country to escape from the scandal which had made headlines in the local press. Betty will never be told the identity of her father. History doesn’t record whether or not Jane met, or even knew about, her granddaughter.

In time, Betty will marry, and her elder son will take up chess. He’ll develop an interest in chess history, and, in 2020, will be asked to review a book called Steinitz in London, where he will come across the name of Samuel Walter Earnshaw.

We’ll now travel back in time half a century, to Easter 1971, where, at Hammersmith Town Hall, he will encounter chess journalist and former international Leonard Barden, who, himself, fifty years on and now in his nineties, still writes excellent chess columns.

We’ll now go back to 1948-49, where a young Leonard Barden finished second in the Premier Reserves Major Section in the annual Hastings Congress. Among his opponents was the veteran German master Jacques Mieses. You’ll see that the game was drawn, but the moves were never published and Leonard didn’t keep his scoresheet, so I’m afraid you’ll have to make do with the crosstable.

Let’s turn the clock back again, more than half a century this time, but we’re still in Hastings, for the great 1895 tournament. A young Mieses is there too, along with the former, and first official, World Champion Wilhelm (or William if you prefer) Steinitz.

Their game was also a draw, although my fishy friend tells me Steinitz had a clear advantage at a couple of points. Mieses did well to hold on and share the point.

And, with the Steinitz – Earnshaw games you saw at the start of the article, we complete the circle. I played Barden, who played Mieses, who played Steinitz, who played the Reverend Samuel Walter Earnshaw, who knew my great grandmother, the scion of a family of humble agricultural labourers.

Online family trees and newspaper articles from www.ancestry.co.uk and www.findmypast.co.uk (both £)

One thought on “Minor Pieces 1: Samuel Walter Earnshaw (i)”