You’ve seen this a couple of times before: a 1902 Surrey Trophy match between Richmond and Redhill.

It’s time to meet Richmond’s Board 8: Cecil Frank Cornwall. Cecil had been born in Chorlton, Manchester on 16 November 1883, so he was still in his teens at the time of this match. His father, Frank Edward Cornwall, was a newspaper proprietor who had been born in India. Shortly after his birth the family moved down to Twickenham, where Cecil’s sister Edith Annie was born in 1885. Their address at that point was given as 1 Carnarvon Villas, Strawberry Hill Road, Twickenham, which had been built by Abraham Slade (mentioned here) in 1866.

By the time of the 1901 census they’d moved round the corner to a house called Hainault in Popes Grove. No occupation was given for Cecil, but Edith was still at school.

It would have been around that time, then, that Cecil joined Richmond Chess Club. It was relatively unusual for teenagers to take part in competitive chess in those days, so I’d guess he’d perhaps learnt the game from his father. He’d also played successfully for Richmond against the same opponents the previous season. (The Sussex Agricultural Express really was essential reading for chess fans.)

Here, then, we have a young player of some promise, already doing well against decent club standard opposition.

By 1903 Cecil was also a member of the famous Metropolitan Chess Club. He spent his life in banking, so it seems quite likely that he was now working in central London.  He was bold enough to submit this game for publication in the London Evening Standard.

Here’s the game for you to play through (click on any move for a pop-up window).

One of the major London chess events at the time was the annual encounter between the City of London and Metropolitan Chess Clubs. In 1905 the City team scored an overwhelming victory, Cornwall drew his game against the American international Clarence Seaman Howell, very easily confused with Clarence ‘Frogman’ Henry. Lots of great names on both sides of the board in this match!

By 1908 Cecil had joined West London, and here found himself playing against Metropolitan, facing another American, James Mortimer, who, half a century or so earlier, had played friendly games against Paul Morphy.

Both players followed contemporary opening theory until Cornwall went wrong, but Mortimer missed his chance, and sportingly submitted the game for publication.

There were other things happening in Cecil Cornwall’s life as well as work and chess. On 30 April 1910 the wedding bells were ringing from Holy Trinity Church across Twickenham Green for the marriage of Cecil Frank Cornwall and Violet Mary Jones Price (these two names sometimes hyphenated), the Oxford born daughter of a Welsh commercial traveller. Nine months later, on 27 December, a daughter arrived. Cecil liked his name so much that she was named Cecil Gwendolyn Edith Cornwall.  By the time of her baptism, her third name had been changed from Edith to Clare, and her mother’s middle name was given as Marie rather than Mary.

In 1911 Cecil, Violet and their young daughter were living at 5 Wellesley Terrace, Hampton Road, Twickenham, again very near Twickenham Green, along with Violet’s 18 year old brother Godfrey Horace Reginald Price, a boarder who was, like Cecil, employed as a bank clerk.

One rather puzzling aspect of their 1911 census record is that it was Violet rather than Cecil who completed the form, and that she added quote marks round “Head” and “Wife”. One wonders why.

The family’s happiness was not to last long. In the fourth quarter of 1912 a son, Alan Maxwell Frank Cornwall, was born, and, sadly, his death was registered in the same quarter. Cecil continued to play chess, making occasional appearances in Surrey county matches and individual competitions. But war clouds were gathering over Europe and soon there would be little competitive chess for him.

Determined to serve his country, Cecil Frank Cornwall signed up for a short service commission in the army reserves. Here’s the front page of his attestation, giving his address as 46 King Edward’s Grove, Teddington. We’ll return there later. However, a 1915 electoral roll gives his address as 52 Langham Road, Teddington, not very far away. 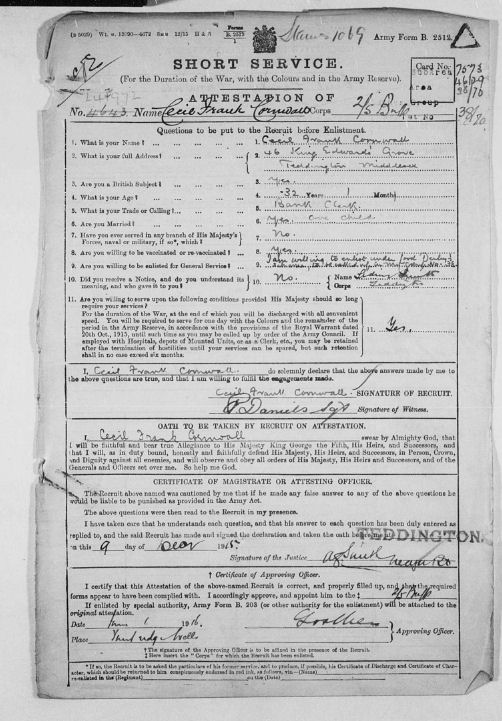 In the first quarter of 1918 the birth of a daughter, Dolores, was registered, and again her death was also registered in the same quarter. A tragedy for Cecil and Violet to have lost two children at, or soon after, birth.

After the end of the First World War competitive chess gradually started up again and in 1920 Cecil played for Surrey against Lancashire in the final of the BCF County Championship.

By now it was 1921 and time for another census. It’s clear that there was a problem of some sort within the family as Cecil and Violet were living separately. I guess the loss of two children might have put an unbearable strain on their marriage.

Violet was in King Edward’s Grove, not at number 46, but at number 1, where Felicia Crofts was letting apartments. Violet, aged 32, was a lodger, occupation described as ‘supported by husband permanent living’. Also there were  Henry Charles Crozier, a 56 year old insurance clerk, Edmund Joseph Woodland, a 65 year old dealer on the Stock Exchange, and his 61 year old wife Emma Kate.

Cecil was also in a boarding house, at 29 Sheen Road, Richmond, a 37 year old bank clerk working for London, County, Westminster and Parr’s Bank, which would become Westminster Bank in 1923 and is now NatWest.

Although at that point it seems they were still married, and I can’t find any divorce records, in the third quarter of that year Violet married Archibald Gibb (a widower from Portsmouth, born in 1876, who, in 1911, had been living at 31 King Edward’s Grove) in Kingston. But less than a year later, on 29 August 1922, she died of valvular heart disease, at the age of only 32.

The decade from 1912 to 1922 must have been a very difficult time for Cecil Frank Cornwall. Perhaps his love of chess played a part in keeping him going.  Would the rest of his life bring him happiness?

In 1924 Cecil remarried. His second wife, Helen Kennedy, had been born in Cork in 1895. In October 1925 he was still playing county chess for Surrey, but soon afterwards they crossed the Irish Sea to her home town.

In 1926, a son, Julian Cecil K Cornwall, was born in Cork, and a daughter, Adrianne Kathleen Mary, followed in 1928 in Dingle, right over the other side of Ireland. But they didn’t stay there long. Soon after their daughter’s birth they sailed back to England, perhaps at first settling back in the Richmond or Kingston area, as Cecil, wasting no time in resuming his chess career, scored his greatest success, becoming county champion in 1930. The winner the following year would be none other than Harry Golombek.

It was the tradition at the time that the club or county champion had the honour of playing on top board, and so it was that Cornwall encountered William Albert Fairhurst in the final of the BCF County Championship.

They then decided to move again, settling on the south coast in Hove in 1932, with Cecil continuing his work as a bank clerk, and later becoming a bank manager. He joined the thriving Brighton Chess Club, and, in 1933, won their club championship for the first time. Here’s a fine attacking game, against the 1910 Scottish Champion, published in 1933 but probably played slightly earlier.

This wouldn’t be the only time he won the Brighton Club Championship. Four years later, in 1937, he was again successful, and, after a break during the dark days of World War Two, he won the title five times in succession, from 1944 to 1948. Pretty good going, especially as he was in his mid sixties by the time of his last victory.

The only photograph I’ve been able to find of Cornwall is this, from a local paper in 1950, and reproduced on a couple of online family trees, where he’s playing a simul against some local teenagers. 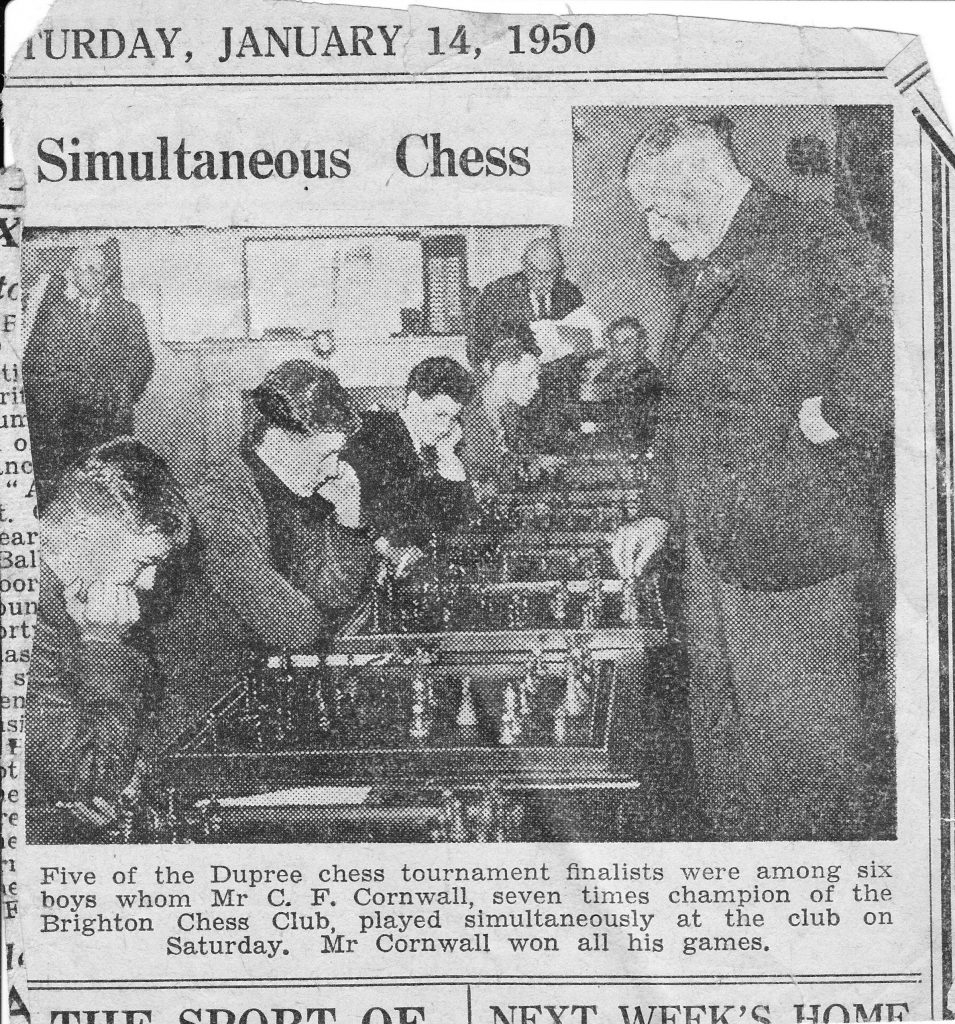 Had Cecil found happiness with his second family and his new chess life in Brighton? I’m not so sure.

Cecil Frank Cornwall died at the Edenhall Marie Curie Centre, 11 Lyndhurst Gardens, Hampstead (a hospice which had opened the previous year) on 26 September 1955. The death notice in the Daily Telegraph two days later was perfunctory: “dearly loved brother of Edith”. No mention of Helen, Julian or Adrianne, or of his daughter Cecil from his first marriage, all of whom were still alive. You have to wonder why not. Very strange, and rather sad as well. Helen lived on until 1981, when her death was registered in Lewes, Sussex.

There you have it, then. Cecil Frank Cornwall, a member of Richmond Chess Club in the early 1900s, was a strong amateur player, champion of Surrey, and, on seven occasions, of Brighton Chess Club, and for those achievements he deserves to be remembered. His few surviving games show him to have been an aggressive player with a talent for tactics, who could, perhaps, have scaled the heights had he chosen to do so. His life was touched by sadness in several ways, particularly between 1912 and 1922: I hope chess brought him solace as well as friendship, excitement and mental stimulation.

He was one of my predecessors in more ways than one. Let me take you on a walk along King Edward’s Grove, a road in South Teddington running between Kingston Road and Broom Road. It was briefly called Cornelius Road in the 1890s, but when it started to acquire housing in the early 1900s it was renamed in honour of the reigning monarch.

Entering from Kingston Road, Number 1, where Violet Cornwall, as she then was, was lodging in 1921, is the first house on your left. Continuing along the road, and still in 1921, let’s knock on the door of 27 King Edward’s Grove. Whose family lives in a house like this? The answer is none other than Cecil Frank Cornwall’s Metropolitan teammate from 1905, Edward Guthlac Sergeant, who had a long and distinguished chess career which I hope to cover at some future date.  He’d only just moved in at that point, and would only stay there a couple of years. Just two doors further along is number 31, where Violet’s second husband, Archibald Gibb, was living in 1911. It’s now a care home for adults with learning difficulties and autism. On the other side of the road is number 46, where Cecil and Violet were living in 1916. Perhaps Archie across the road took a shine to Vi. Carry on right to the end of the road, to number 73 on the corner of Broom Road, turn the clock forward to 1934, and you’ll find a rather unusual household. The house is owned by the Misses Ada and Louisa Padbury, who until recently had run a ham and beef shop in nearby Bushy Park Road. Two other sisters are there: Ellen, a dressmaker, and the disreputable Florence, in the final stages of TB, along with her illegitimate children Arthur and Betty, who had been brought up by Ada and Louisa. Florence died in 1935, after which, like others in the same road, the property was converted into a boarding house. When Betty married in 1949, she and her husband remained there until they could afford their own place, and it was there that their older son would spend the first two years of his life.

That son was me, and so I followed in the footsteps of Cecil Frank Cornwall by living in King Edward’s Grove (as did Edward Guthlac Sergeant) as well as by being a member of Richmond Chess Club.

Brighton Chess by Brian Denman, self-published in 1994 and highly recommended if you can get hold of a copy.