If you know me at all you’ll be aware that I’ve been involved with junior chess since 1972. If you’ve spoken to me on the subject you’ll also be aware that my views on why, how, where, when, to whom and by whom chess should be taught are very different from those propounded by most junior chess teachers and organisers in the UK.

In particular, I have doubts about the value of much of what currently happens in primary school chess, which has always appeared to me to provide short-term fun at the expense of genuine long-term benefit.

I was commissioned by education publishers Crown House to write a book for schoolteachers putting forward my suggestions as to how schools might take a different approach to chess.

My views in brief (and in general) about how junior chess in the UK should be run:

The book has now been published: you can find out more on the publisher’s website here. 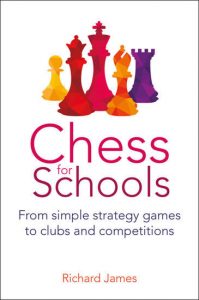 Here’s what GM Peter Wells has to say about the book:

When I began to read Chess for Schools, I was aware of two salient facts: that Richard James has tremendous experience teaching chess to children – in a classroom setting and as founder of the famously successful Richmond Junior Chess Club; and that he has been a consistent critic of much current chess teaching practice – particularly in primary schools, where he believes the teaching of chess is frequently pitched at an unrealistic level in relation to the cognitive development of the pupils. I was consequently well-prepared for a text that might ruffle some feathers.

I was not disappointed. There are undeniably passages in the book which will make uncomfortable reading for some chess teachers and parents. Yet far from the feeling that Richard James is gratuitously courting controversy, I came to regard his unwillingness to pull punches with many in his target audience as a mark of the book’s uncommon integrity. His views are the product not only of great experience but also of a persistent quest to improve the outcomes for his pupils, both those with lofty chess ambitions and those who will enjoy a variety of relationships with the game. He has read widely and thought deeply, and the result is a coherent, very readable and well-structured argument which he makes with obvious passion.

This brilliant book is a three-layered cake. It is so well structured that you do not need to read it from end to end and you do not need ever to have touched a chess piece to find it worthwhile. The one key message for teachers is: if you can teach children, you can teach chess. That is, just as there comes a point when pupils will benefit from a specialist geographer, swimming instructor or mathematician, so it is with chess. The first layer sets the scene. It is easy to read, covers the history of chess and its place in education, what chess is – and, crucially, what it is not. The second layer is an impressively brief and comprehensive survey of the place of chess in the curriculum, and it’s not where you think it might be. This layer will make you think about curriculum development in broad terms as well as in relation to chess. It will make you think about the role of parents and parenting in children’s schooling. The book is properly, academically, referenced. The final layer is a manual of chess resources. The book stands alone as a good read without this section. My main revelation was just how many different games you can play with a chess set – it’s as if I had only ever learnt to play snap with a pack of cards.

If you’re sympathetic towards my views and would like to speak further, do feel free to get in touch. I’m always happy to discuss my ideas with anyone involved in any aspect of junior chess.